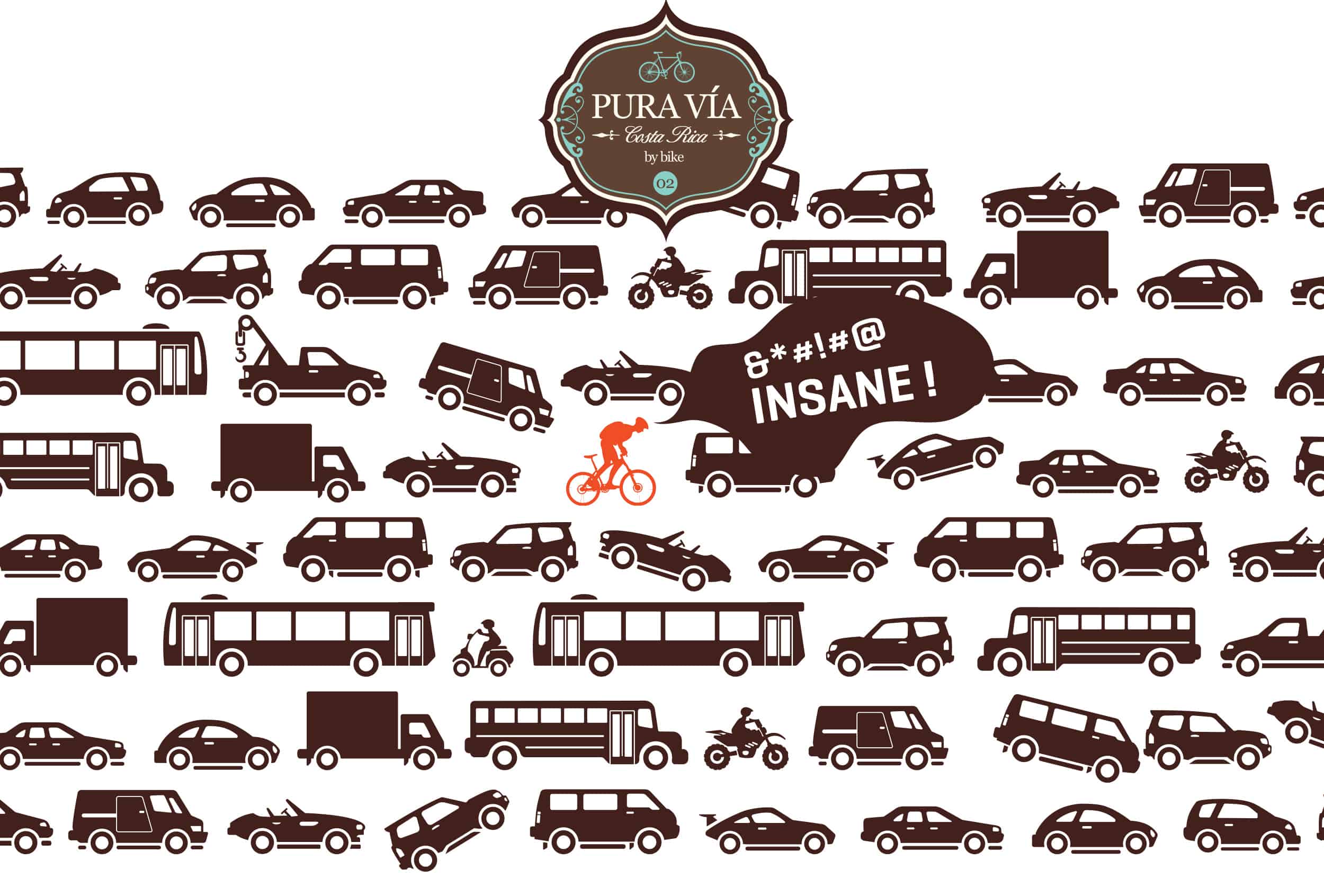 First, I needed a bicycle.

I’ve never really owned a car, but I’ve always had a bike. When I started basing my life in San José, I left the bike behind – which, for me, was like sawing off a foot and leaving it in my mother-in-law’s garage. Yet I had little choice. There’s no easy way to transport a bicycle to Costa Rica, and other possessions took priority.

But that’s okay, I thought. I’ll just find one down here.

The bike I bought from Walmart for $100 barely lasted two rides. The word “INSANE” was painted across its frame, which apparently referred to the act of riding it. I tried to bike to The Tico Times’ office, in Barrio Amón. I had bussed, taxied, walked, and run through San José traffic, so why not bike it? Door to door, the distance from my house isn’t even eight kilometers. Easy.

Not easy, it turned out. “Deadly” would be a better word. The moment I crossed La Sabana Park in western San José and merged with the traffic of Paseo Colón, my body numbed with terror. Cars and trucks hopscotched around me with surprising dexterity. They drove alongside and narrowly missed my elbows with their side mirrors. I considered riding on the sidewalk, but aside from its illegality, the walkways were jammed with pedestrians. I finally dismounted and pushed my bike down Avenida Central, until I reached some quieter side streets and gingerly pedaled my way to the office.

The bike itself was no help. The gears barely shifted, and the body felt leaden. By the time I reached the office, I was exhausted.

“You biked here?” exclaimed my coworkers.

But I still had to bike home. On my return trip, a bolt shot out of the derailleur and a pedal nearly fell off. I coasted down a blessedly long hill and then pushed the bike up the final incline. I never bothered to fix it. I didn’t even bother to complain. It was a $100 bike from Walmart, I reasoned. You get what you pay for.

At the advice of my Amazon wish list, my parents gave me a folding bike for Christmas. The Isenbergs are unsentimental gift-givers, and we tend to ask for ultra-specific presents. I had fantasized about my Shimano folding bike for six months. It wasn’t expensive, but it looked perfect for my needs. I knew its exact proportions, and I knew I could safely transport it to Costa Rica in a Delta aircraft.

“Merry Christmas,” said my Dad, as he led me to my grandmother’s basement.

“Thank you so much, you guys,” I intoned, as I gazed at the unwrapped bicycle. “This is a game-changer.”

“I just hope you get it there all right,” my Dad said.

“Shouldn’t be a problem,” I said, jutting my chin with confidence.

But there was a problem: Delta declared a month-long embargo on oversized luggage – specifically during the holidays. They didn’t want to handle yuletide weight, and they wouldn’t transport my yearned-for bicycle for any price. I would have to wait indefinitely.

Two months later, my wife Kylan returned to the U.S. to track down some documents for our residency application. She brought the bike back with her. This was no small task: Kylan dragged the 20-kilogram vehicle through two concourses before meeting me outside Juan Santamaría International Airport. Months later, I’m still thanking her for enduring that flight.

The purpose of a folding bike is simple: You can pack it into a bag and load it onto a bus, and no one is the wiser. Bus drivers get squeamish around bicycles, because they seem so large and clumsy. But a giant, lumpy bag doesn’t bother them at all. I can easily store the folding bike in a hotel room, instead of locking it outside, where it is vulnerable to thieves. I can stuff it into a taxi’s trunk or stick it behind a receptionist’s desk, no problem.

What’s more, at 66 centimeters, the wheels are large for a folding bike – nearly the diameter a full-sized hybrid’s. Most folding bikes look like overgrown scooters, the kind of toys a 6-year-old might push around a cul-de-sac. This bike feels like the real deal, especially with its three sprockets and 16 gears. When I finally took the bike for a spin around my barrio, the gears shifted smoothly, the brakes were firm, and I levitated up hills with ease.

Still, piddling around Escazú was one thing. Could I ride it across the country? There was only one way to find out.

I’ve biked in various places around the world, and preparing for a trip is one of my favorite pastimes. Among the belongings Kylan brought back from the U.S. was a set of panniers, or saddlebags, handmade by my Dad in 1996. I planned to fit all my equipment into those two sacks. I wanted to carry just the essentials: clothes, camera, repair kit, headlamp, insect repellant, sunblock, and a water filter, plus other odds and ends.

One thing I would leave out: camping gear. Costa Rica is a paradise for outdoor sports, but pitching a tent in the woods isn’t always easy. The truth is, it’s a jungle out there. I am accustomed to autumnal hikes in New England, where campsites are plentiful; but such campsites won’t erupt with fire ants, or breed coral snakes, or attract dengue mosquitoes. Except for multi-day concerts and private yards, opportunities to camp can be a challenge. For budget travelers, a rustic cabina is more familiar.

Pura Vía is an 11-part travel series about biking across Costa Rica. Check out the next episode on Aug. 22. Read Chapter 1 here.

Robert Isenberg is a writer and photojournalist for The Tico Times. He is the author of numerous books, plays, and documentaries. Visit him at robertisenberg.net.