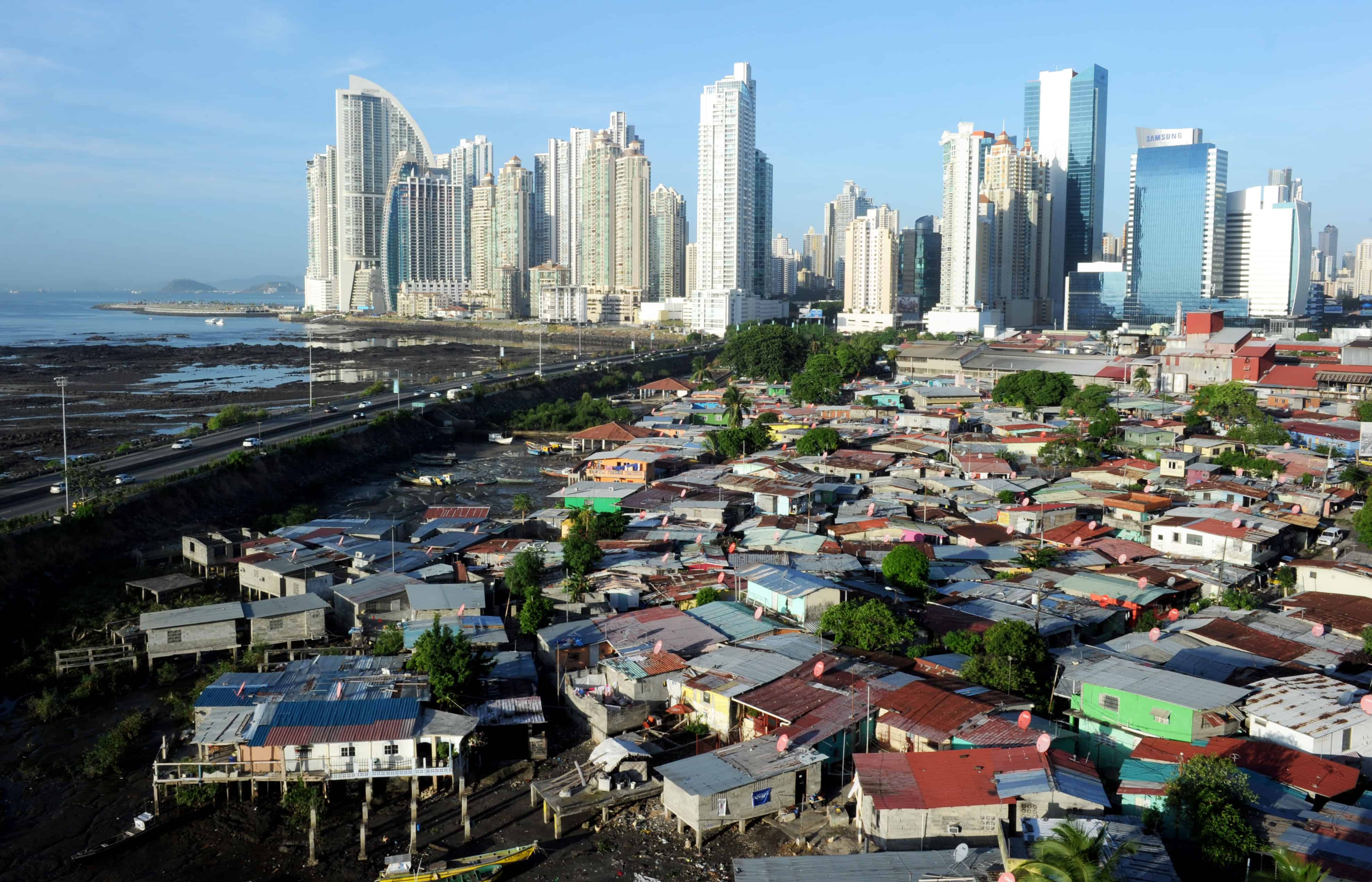 WASHINGTON, D.C. – Panama’s economy will grow by 7 percent this year, but because of glaring inequality, most Panamanians will never see that prosperity. In Guatemala, corruption is rampant among the “klepto-dictatorship” that runs the country, and in El Salvador, gross domestic product stagnates as politicians stuff their pockets with money from violent gangs. Panama, with 3.9 million inhabitants, is the smallest of Central America’s six Spanish-speaking republics. Last year its GDP expanded by 6 percent – faster than any other country in the Western Hemisphere – and the economy could grow even faster in 2015.

“Since the 1999 return of the Panama Canal, the country’s productive forces have been unleashed, and that means more money to fund public policies,” said Brown. “But that also opens up more possibilities for corruption.”

Accusations of corruption and mismanagement routinely plagued Varela’s predecessor, Roberto Martinelli, which is why “Varela worked diligently towards the end of his term as Martinelli’s vice president to distance himself from the former president’s most fundamental positions,” according to a policy paper issued in September by the Council on Hemispheric Affairs, a Washington think tank. In late January, Panama’s Supreme Court voted to launch an investigation against Martinelli over allegations the ex-president inflated contracts worth $45 million to buy dehydrated food for a government social program. Martinelli, a billionaire supermarket magnate, denies the charges and says he’s the target of political persecution by Varela.

Brown noted that while the proportion of Panamanians living below the poverty line has fallen from 48 percent in 2002 to 27 percent today, “inequality is high and continues to be high. It has not been reduced significantly.” He added that spending in the May 2014 election was outrageous by regional standards.

Costs per vote came to $15 in the 2009 elections that put Martinelli in office, making it “the most expensive vote in all of Central America.” By the time of the May 2014 elections, that number had increased to $31 per vote, Brown said. And that didn’t take into account public financing, which pushed Panama’s per-vote expenditures past $40.

“It was financially exorbitant and there was quite a lot of negativity, but often in Panamanian politics, negative campaigns are seen as a result of ill will among the candidates,” he said. “Many issues like the rights of indigenous people or same-sex marriage are not being debated. The issues are no longer important, and that’s where negative campaigning comes up in large measure.”

Brown added that “very little is said about increasing conflict in Panama. It’s not like Peru or Bolivia, but it is explosive by Panamanian standards, and especially paradoxical since the economy is growing.” Nearly a year ago in El Salvador, presidential candidate Salvador Sánchez Cerén of the leftist FMLN narrowly defeated rightist Arena candidate Norman Quijano – the former mayor of San Salvador – by a vote of 50.11 percent to 49.89 percent.

“I must say that on a purely political sphere, it was an important leap forward. This has been a determining factor on the political map of El Salvador,” said Silva, former deputy chief of mission at El Salvador’s Embassy in Washington.

Yet Sánchez Cerén’s margin of victory was less than 7,000 votes in a country of 6.4 million, meaning deep political divisions remain in the country. Many of those stem from the country’s 1980-92 civil war in which 75,000 people died, and during which time the current president was a guerrilla fighter known as Comandante Leonél González.

“Governance in El Salvador has been attached to parties. The exception is the judiciary, which has unprecedented independence and has made landmark rulings,” Silva said.

On March 1, Salvadorans will go to the polls again, this time to elect members of the country’s 84-member legislature, as well as mayors of El Salvador’s 262 municipalities.

“All polls indicate that the status quo will remain,” Silva told his Wilson Center audience. “None of the parties will achieve a simple majority.” For now, said the blogger and former diplomat, El Salvador’s most urgent challenge is reducing its homicide rate, which had been falling in recent years but surged by 57 percent last year to reach 63 per 100,000 inhabitants – nearly as high as the 66 per 100,000 homicide rate registered by neighboring Honduras.

“For 10 years we have been among the five most violent countries in the world,” he said. “These gangs are now sophisticated criminal organizations. They’re very deep-rooted in the community, more like the Medellín cartels. They have significant dialogue with the state, thanks to a truce which the state agreed to in 2012.”

But the gangs’ influence is also thanks to the “penetration of organized crime” into the highest levels of government, he said.

“These criminals use money to support candidates who favor them. They finance mayors, deputies and congressmen. There’s been economic stagnation because of this,” he claimed. “For almost two decades, El Salvador has not grown beyond 1.8 percent a year. It’s one of the most unequal economies in the region, and this has a direct, immediate effect on the United States. This is the basis for the growing migratory flow from Central America northward to the U.S. which created a crisis last year.”

Guatemala, by comparison, enjoyed GDP growth of 4 percent last year – significantly higher than the regional average. But only 40,000 people, or one in five unemployed guatemaltecos, found jobs in the formal economy, said Zamora. That means the other 80 percent have no possibilities other than working informally or fleeing to the United States.

“The majority of Guatemalans are excluded and live in poverty. Wealth continues to be held in a few hands,” he said. “Guatemala is the most unequal country in the hemisphere. Fifty percent of children under 5 suffer chronic malnutrition.”

Zamora, speaking loudly and passionately, rallied against what he called the “klepto-dictatorship” of Gen. Otto Pérez Molina, who in 2011 became the country’s first ex-military man to be elected president since Guatemala’s return to democracy in 1986. Molina was preceded as president by leftist Álvaro Colom, who took office in 2008.

“The last six years have been characterized by a new cycle of expansionist policies but with deficits in the medium and long term. Investments in public expenditures have no transparency, and there’s more opacity and corruption,” he complained. “There’s a sharp divorce between the political parties. They’re just electoral vehicles without any strategies or programs, nor do they have any idea what they’re supposed to do.”

Nepotism and cronyism are rife in Guatemala, said Zamora, who was held hostage at his home in 2003, was beaten and kidnapped five years later and has been honored by the Committee to Protect Journalists and other press freedom watchdogs.

Any presidential candidate needs at least $100 million to be taken seriously in Guatemala today. “This amount can only come from criminal mafias,” he said, drawing parallels between Central America’s largest country and Vladimir Putin’s Russia.

“Guatemala has not fulfilled even one of the millennium objectives as it promised to do. Economic power is in the hands of the military, which hampers justice and persecutes its critics. Violence and insecurity are deeply rooted in society,” said Zamora, warning that the $1 billion Guatemala now seeks from the U.S. administration of President Barack Obama to stem the flow of immigrants to the United States “will do nothing to help the country.”