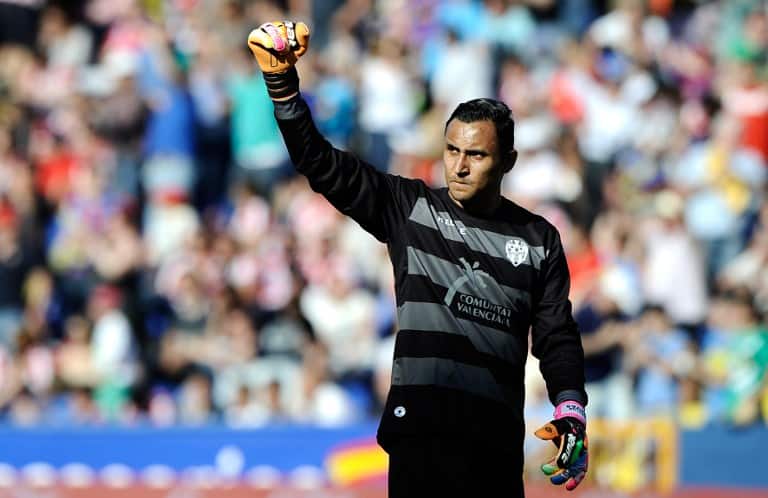 Levante stunned La Liga leaders Atlético Madrid, 2-0, thanks to the spectacular goalkeeping of Costa Rican Keylor Navas. An own-goal gave Levante a lead seven minutes into the game and from there Navas held like a brick wall, parrying away Atlético’s best shots.

His most dazzling save came in the 66th minute as Navas leapt to deny a 25-yard shot toward the top left corner of the goal from Toby Alderweireld. Two minutes later David Barral scored to give Navas and Levante some breathing room. The shocking victory devastated Atlético (whose fans were captured making racist taunts at a Levante player after the final whistle). Atlético is trying to hold off Barcelona and Real Madrid and win its first La Liga title since 1996.

Navas demonstrated again he has the talent to propel underdogs — say like, Costa Rica — to big wins. With him in goal, Costa Rica conceded the fewest goals during Concacaf qualifying last year. He’s the top goalie in La Liga, despite playing for a middle-of-the-road team. Navas, 27, will be in for a big pay day when his current contract expires. But before that happens, the Tico will head for Brazil as La Sele’s top keeper.

An extraordinary goalkeeping performance was the key to Costa Rica’s surprise triumph in the World Cup group stage in 1990. A little-known keeper named Luis Gabelo Canejo propelled La Sele to two first round upsets over Sweden and Scotland and into the Round of 16. That marked the only time Costa Rica advanced past the World Cup’s group stage.

Appropriately, Conejo is now the national team’s goalie coach. He will be preparing Navas for the pressures of the world’s biggest tournament. There the gifted goalkeeper must stymie three of the best teams in the world in Uruguay, Italy and England. On Sunday, Navas looked again like he’s up for the challenge.

UPDATE: Good timing by FIFA, which published a Q&A with Keylor Navas on Monday. The interviewer kept pestering Navas with questions about how he’s going to stop all the stars on the opposing teams, which led to Navas’ best response:

I play in a very competitive league and every Sunday I come up against some of the best players in the world, so I stopped being nervous about facing big-name players a long time ago. I feel quite relaxed. For me it’s a great challenge to play against the best. It will test us to the limit and allow us to find out just how good we are. They’re all great players. But we have one big advantage. They’re so well known that we know all about their strengths. So we just need to make sure we defend as well as we can.

Navas also said the player he most would like to exchange jerseys with is Italian goalkeeper Gianluigi Buffon.