San Juan del Sur: Have a ‘come to Jesus’ moment 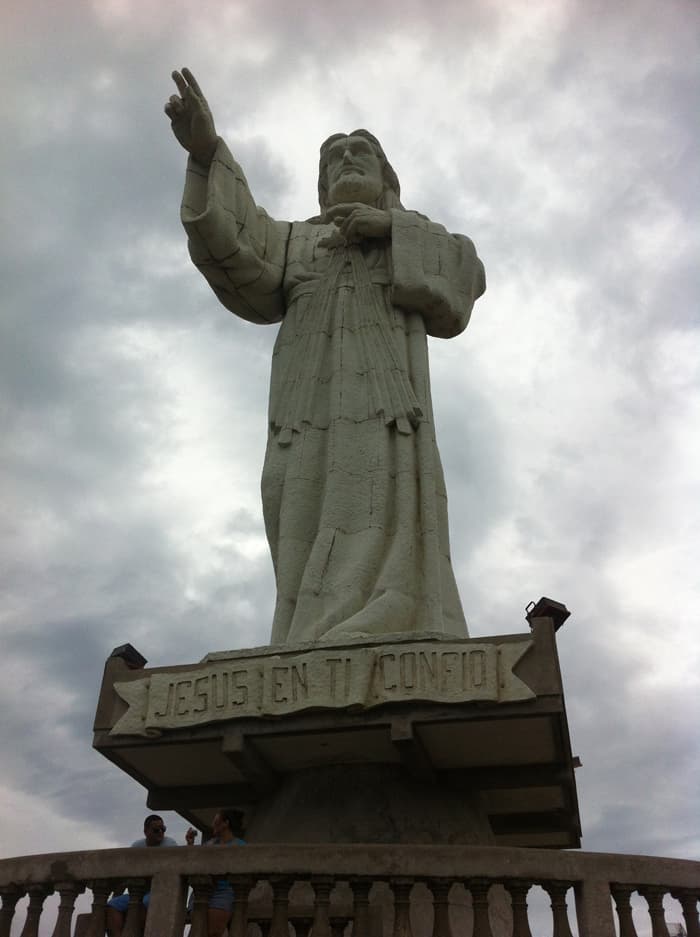 Dos, por favor: The Christ of Mercy statue. The legend says, "Jesus, in you I trust." (Karl Kahler/The Tico Times)

SAN JUAN DEL SUR, Nicaragua — As soon as I saw the big white statue on a cliff overlooking this town, I knew I had to come to Jesus.

I asked a waiter how to get there and he said you can climb up from the left, but “there are lots of thieves.” He gave me complicated directions for getting there from the right.

I saw on TripAdvisor that a couple of visitors complained that crooks at the top were charging for parking and admission when they had no authority to do so.

So on Thursday at 10:30 I set out, walking on the beach from the southernmost part of town. A frisky little dog ran up to me wanting to play, running around me and jumping up, and his sharp little claw left an inch-long scratch on my arm that immediately started bleeding.

Fortunately it was my worst injury all day.

A couple of German women walking toward me asked if I knew how to get to Jesus. I should have said, “Have faith and pray.”

But I told them what the waiter told me. They said they had found a path to the left of the statue, but the stairs were totally destroyed.

I asked a couple of young women who looked like locals if they knew the way, but they didn’t. The German women and I walked on in opposite directions.

At the last hotel before the cliff, I asked a guard. He pointed back in the direction I had come and said the entrance was way back there. Or, he said, I could keep going and climb over a wall next to the cliff, and that would lead there.

I walked on and climbed over the little wall, which led to a broad, deserted walkway between the hotel and the mountain. I wondered if I would encounter dogs of a more vicious variety, or if this was where the thieves lurked.

But soon I came to a very steep brick road leading up, and I knew I had found “the way.”

In no time I was drenched in sweat. A couple of trucks and motorcycles passed me, and it occurred to me that this would be a good place to rob someone walking alone.

I tried to remember why I didn’t drive. Oh, yeah, the directions were too complicated.

I came to an uniformed officer opening gates for vehicles and showing people where to park. He didn’t look like the crooks that TripAdvisor was talking about.

A sign advised that entrance was $2 for foreigners, 20 cordobas for nationals (about 70 cents). I wasn’t sure if I was supposed to pay here. “Puedo pasar?” I asked. He told me to go ahead.

The road got even steeper, and then super-steep, but with stairs on the side. A sign said there was no running, but you’ve have to be an elite athlete to run up this incline.

Finally I came to a gate where a nice older man said it would be $2. I asked if he had change for either $20 or 500 cordobas, and he didn’t. I felt like I had reached the pearly gates, only to be turned away by Peter because I didn’t have the correct change.

I was in! And it was staggering. The view of San Juan Bay was spectacular, and the Jesus towering overhead made me want to genuflect.

There is a little chapel under the statue with informational displays on Christ statues around the world, oddly juxtaposed with an altar, pews and paintings of Jesus and Mary.

The displays say the statue, known as Cristo de la Misericordia or Christ of Mercy, was built in 2009 and is 15 meters high in addition to its 9-meter pedestal, for a total of 24 meters. (Another display says it’s 26 meters, but 24 is the height usually cited.)

A circular walkway leads up to the very base of the statue, offering an even better view. I spent a long time just taking in the sights. I had the place all to myself except for a man and a woman sitting up on top.

And then two other people showed up, and I smiled and waved. It was the two German women.

Getting there: You can do what I did if you can climb a small wall. Otherwise, walk along the beach toward the statue and look for an alley between hotels that leads to a brick road running parallel to the beach, and continue north. Follow signs pointing to Malibú, Le Sorelle and La Joya and you’ll find the steep brick road leading up.
Hours: 8 a.m. to 5 p.m. daily.
Admission: $2 for foreigners, 20 cordobas for nationals.
For more info: http://www.tripadvisor.com/Attraction_Review-g528745-d5889584-Reviews-Mirador_del_Cristo_de_la_Misericordia-San_Juan_del_Sur_Rivas_Department.html