Will Anaerobic Coffee Change What You Drink In The Morning?

Costa Rica Coffee Whole Bean or Pre-Ground: Is there a Difference? 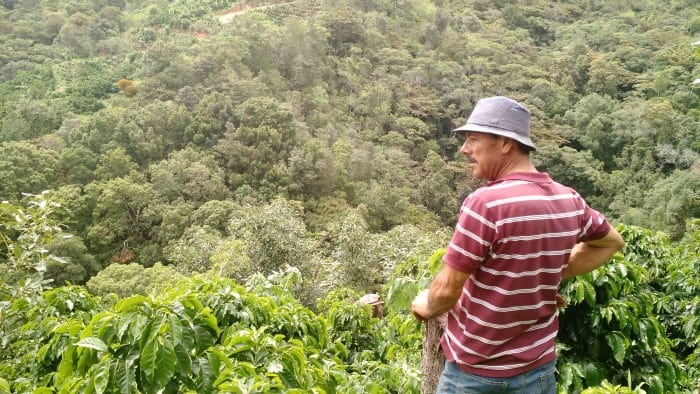 SANTA MARÍA DE DOTA, San José — While my car was stuck atop the steep, rocky path leading up to Microbeneficio Monte Copey in Dota Tarrazú, I had a second to admire the dreamlike beauty of the hillsides around me. That serene moment quickly evaporated into a half-minute of panic when my car began rolling back down the 45-degree incline even as my foot remained planted on the brake.

My stomach dropped as my back tires spit up rocks and slipped towards the cliff’s edge. Luis Enrique Navarro Jr. of Monte Copey ran down after me as I pulled the emergency brake and was finally able to stop the car before it turned into my casket.

“Don’t get scared,” Navarro said with a smile. “We’ll get the car down.”

After some creative maneuvering and the help of five workers from a neighboring finca, we were able to tie the car to Navarro’s Toyota and gently reverse it down the hill.

When Enrique Jr. drove us up to his family coffee farm, the views only got more surreal as Santa María de Dota hung like a faraway secret between the hills conspiring to hide it. With the climb to the scenic finca, 1,800 meters (5,900 feet) above sea level, the anxiety of a near-disaster was soon pushed out of mind by the day’s lazy winds.

There are so many sayings about good things — whether they come to those who wait or that they’re worth fighting for — that the cliches can sometimes collide in contradiction with one another.

But high above on this perch, where one of Costa Rica’s very best cups of coffee is made, both fighting and waiting make equal sense.

Enrique Navarro Sr., the 55-year-0ld owner of Microbeneficio Monte Copey, often alludes to the business behind the 2014 Cup of Excellence award winner as a never-ending battle.

“It always opens up the desire to keep fighting and going forward,” he says in a quiet but assured tone as he leans back on the railings of a staircase. “It’s not just that we won and ‘OK’. We’re going to keep fighting forever.”

Though the business world is driven by competition, it’s a disciplined patience that has come to define Monte Copey coffee’s supreme quality. Plants here thrive under a longer-than-normal maturing process, which is capped off by a strict harvesting period from January to March of each year.

Enrique Sr. also credits the altitude for making Monte Copey’s highly decorated coffee so unique. And, as my car’s failed ascent shows, it’s not easy running an everyday business on a farm that hangs near the clouds.

But coffee making has been an integral part of Dota’s economy for more than 100 years, and the Navarro family has been here basically since the beginning. Enrique Sr. says his grandfather was one of the largest coffee producers in the region, which made him want to continue the family’s legacy.

Before he bought his first finca at the age of 18, Enrique Sr. worked for CoopeTarrazu, the large coffee cooperative in the area. He remembers being intensely curious about the plant and how best to cultivate it. Though he knew he could be an annoyance while always asking questions of the older workers, he recalls a phrase from his grandmother that kept him inquisitive: “It’s better to look stupid for 30 seconds than to be stupid for a lifetime,” she would tell him.

In the early 1990s he bought three hectares of land in Dota Tarrazú where Monte Copey is now located. Though higher-altitude coffee farming was still an unknown because of the sheer difficulty in maintaining crops, it was soon discovered that coffee beans grown correctly in an altitude at or above 1,800 meters could thrive and produce a better product.

Enrique Jr., who has shared in his father’s life work ever since Monte Copey began six years ago, says the large contrasts between the heat during the day and the cold at night allow the coffee bean to be worked out like a muscle and sweat off unwanted flavors. As a result of this rapid process of expansion during the day and contraction at night, coffee from higher altitudes is more dense and naturally sweeter than most other coffees.

Though he’s just 23, Enrique Jr. plays a huge role in the coffee farm’s year-round success and is in charge of overseeing the all-important harvesting process. The younger Navarro left school when he was 16 to work on the family business but maintains the same passion for learning that his father showed at the same age.

“Personally, I feel motivated by wine culture,” he said. “They are so demanding and use so many techniques in order to produce a good wine. I try to apply these same practices to the coffee farm, because in the end it’s a drink just like wine.”

The magical coffee-growing region, with its waves of green hills that resemble Tuscany, has received a lot of attention thanks to the micro mill’s many accolades. The Navarro’s have also worked in close collaboration with Japanese barista Hidenori Izaki, who won the 2014 World Barista Championship using Monte Copey coffee. But for the family, these recognitions belong equally to the Dota region and to Costa Rica.

“When we won I felt like a representative of a bunch of producers in Costa Rica because, in the end, when we win the beneficio isn’t just ours, it’s for all coffeemakers in the country,” said Enrique Jr. regarding the Cup of Excellence win.

As the microbeneficio grows, the Navarro family looks to branch out to other avenues of business that can lead more customers to their famed coffee. They are in the early stages of working with private tour companies to bring ecotours through their land, which includes a 15-meter waterfall.

But the worry right now centers on quantity for a small farm trying to keep up with a growing demand of international clientele.

“Each year people say they hear that Monte Copey has good coffee and every year there’s new people coming,” Enrique Sr. said. “So we’re trying to grow a little bit too to be able to accommodate the demand of our clients.”

Monte Copey already sells 70 percent of its harvest to Asia, mainly Japan and Korea. But ballooning interest from the Americas, as well as continued demand from already established markets like those in Scandinavia, may require the farm’s expansion.

“But behind this another factor that always drives us is the quality,” Enrique Jr. said. “It doesn’t do anything if we make a bunch of coffee and its not any good. What does that do?”

If there’s a place that can balance out the push and pull between quality and quantity in coffee production, it might just be Monte Copey. Though the micro mill has only been around for six years, it’s able to pay its seasonal immigrant workers about 70 percent more than the law requires. Plus, as Enrique Jr. notes, coffee runs in the family’s blood.

And in that same fashion, the farm’s enchanting atmosphere is perfectly encapsulated by some of the world’s best coffee.

“We want for anyone drinking a cup of our coffee throughout the world to be satisfied,” Enrique Jr. said. “And through the medium of one cup we can translate all of the work and effort we make in the farm.”