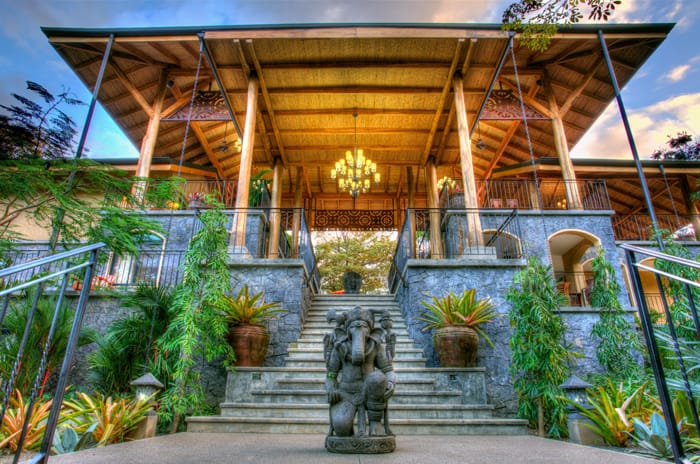 NOSARA, Guanacaste — When you walk up to the Bodhi Tree Yoga Resort, you face a huge flight of stairs surrounded by tropical bushes, with a waterfall to the left. You think, “Wow, that’s beautiful,” and “Man, that’s a lot of stairs.”

But this stairway turns into something of a portal to a higher dimension, as you learn three-quarters of the way to the top when you’re greeted by a stone statue of Ganesh, the Indian elephant god, whose hand is full of golden coins tossed in for luck. “That’s the richest elephant in Nosara,” I said to my girlfriend.

A few steps later you emerge into a beautiful, breeze-swept lobby, with a stunning swimming pool just above, and you’re in Shangri-La. And you already know that yoga, exercise and maybe even enlightenment await just a few steps beyond.

I kept humming “Stairway to Heaven.” You do have to climb a lot of stairs, but considering the destination, why not?

Just three years old, the Bodhi Tree is the most visually spectacular hotel in Nosara. It’s a 4-star hotel with a coherent Eastern theme, with authentic Buddha statues, striking yoga studios, immaculate rooms, and lush gardens and waterfalls and streams throughout the property.

“The style is like a Balinese temple,” said General Manager María del Mar Alfaro. I couldn’t have described it better myself.

I would also call the Bodhi Tree the epicenter of the very active yoga scene in this yoga-crazy town. In the high season it offers six or seven classes a day in yoga, TRX and Pilates — in fact, one class per day is included in your stay — and for various reasons I would say it’s uniquely positioned to be the top yoga draw here for years to come.

In this series, Tico Times Travel takes an in-depth look at some of Costa Rica’s greatest destinations, with multiple articles exploring their appeal. In February and March, we’ll be looking at all the attractions of Nosara — yoga, surfing, hotels, restaurants, real estate and more.

The preliminary design was based, of all things, on a miniature temple inside an aquarium.

Gary Edwards, a Canadian entrepreneur, built the hotel to serve as lodging for the Nosara Yoga Institute next door, which he also ended up acquiring.

Gary, who had done extreme sports all his life, had broken his left leg three times and had five surgeries on each knee. He started doing yoga to rehabilitate his knees, and when a doctor told him he had to quit skiing, he took up surfing.

The combination of those interests brought him to Nosara, a mecca of both yoga and surfing, and led to the opportunity to build the Bodhi Tree.

He also put solar panels on every roof, built a septic recycling plant to reuse water for irrigation, and made this a plastic-free resort.

Gary went to Bali shopping for statues and other Eastern-themed décor, and he came back with two or three shipping containers full. To light the walkways around the sprawling property, he bought 150 yard lights that look like little temples. And he found craftsmen in Bali to build the beautiful lobby furniture that he designed.

“Everything here is teak, pochote or guanacaste,” he said. “Some cedro as well, some cedar. We’re using a lot of guanacaste now because it’s a really pretty wood. It’s all from here. The only reason I brought stuff from Indonesia was because you can’t get those kind of statues here.”

“Many people only do yoga or they surf or they work out,” he said, “but what I have created is a complete health and fitness-minded facility based on the foundation of yoga.”

Guiselle and I were greeted upon check-in by two friendly people at the front desk, one of whom vanished and reappeared with two cold coconuts with bamboo straws. The other one checked us in and then led us to room 201, along with a friendly female security guard dressed in black in the tropical heat who cheerfully insisted on helping with our luggage.

The entrance to our room was around a corner on an elevated, L-shaped wooden deck — designed for privacy, so that nobody walks by your front door.

The room, which smelled pleasantly of fresh wood, had a queen bed and a double bed, both draped in high-end mosquito netting that actually managed to look attractive. There was a minibar stocked with beer, wine and soda and a basket of snacks. There was a strong fan hanging from the 12-foot ceiling and a painting of a breaking green wave, plus a large armoire with his and hers robes in it.

The bathroom was a beauty too, with an unusual sink made of some kind of crystalline stone, and a bathroom counter that appeared to be made of granite or gneiss. Best of all, there was a shower open to the air above a 6-foot stone wall, with a floor made of pebbles inlaid in cement.

The next day we were offered a bungalow suite, which had a spacious, well-furnished living room in addition to a sumptuously decorated bedroom with a king bed. And of course there was a giant Buddha painting on the wall.

Guiselle was a bit apprehensive about staying at the Bodhi Tree, fearful that it would be full of cheerless vegan yogis who frowned on drinking and laughing. But the after-dinner scene in the bar — yes, there’s a bar — on a Sunday night was positively hopping, with a two-man band singing, “Hey little thing, let me light your candle, ’cause-a mama I’m sho hard to handle, now, yes, I am.” I ordered a white Russian and watched three women dancing with each other. It was a great vibe.

Lest I forget, I also took an excellent introductory yoga class, described here, and enjoyed a masterful one-hour massage at the spa.

All of the 34 units here are air-conditioned and have ceiling fans and hot water, plus outside showers. Some have minibars, though none have television, which is widely frowned upon by hotels in Nosara.

“We have good Wi-Fi, the best Wi-Fi in Nosara,” said María del Mar. “Everyone comes to the Juice Bar to use it.”

Rates vary widely by room and season, with the most luxurious option, the Bodhi House, selling for between $610 and $999 a night for four people. The most economical option, one bed in a shared room for three with a shared bathroom, goes for $77 to $125. A bungalow for two with a king or queen bed is $299 to $485. A good buffet breakfast and one yoga class a day are included in all these rates, though the 13% tax is not.

I asked Gary what it is about Nosara that attracts people, that makes people say there’s a vortex of good energy here.

“I think there’s something undeniably unique about the place,” he said. “There’s a special energy that’s been here for many years.

“How many places in the world can you go that has a beautiful beach where there are no restaurants, there are no hotels? When you’re surfing, you’re looking back, and it’s jungle. It’s just a natural beach, without all the glitter and the glare and the commercialism that comes with having a nice beach.”

As I left the hotel, I touched Ganesh on the head for luck. Down below, I saw some new check-ins climbing the stairway to heaven.

I thought: “Keep going. It’s worth the climb.”