Costa Rica’s National Team, La Sele, is set to face Canada at 5:30 p.m. (Central Time) on Tuesday in Houston, after opening the group stage of the CONCACAF Gold Cup 2017 with an important 1-0 win over Honduras in New Jersey this past Friday.

Tico coach Oscar Ramírez will be forced to modify his starting lineup after facing two unexpected changes during Friday’s match.

Defender Bryan Oviedo had a muscular problem during the warmup and had to give away his spot to Kenner Gutiérrez. Then offensive midfielder Johan Venegas suffered an injury 32 minutes into the first half and was replaced by Joel Campbell.

On Monday evening, Ramírez announced that Kendall Waston will replace Oviedo for the rest of the tournament. Oviedo arrived in Costa Rica on Sunday night to undergo therapy for a week before flying to England to join his club team, Sunderland A.F.C.

Tuesday’s match will define the Group A leader. Before Costa Rica’s match on Friday, Canada defeated French Guiana 4-2. The match will take place at the BBVA Compass Stadium in Houston, Texas. 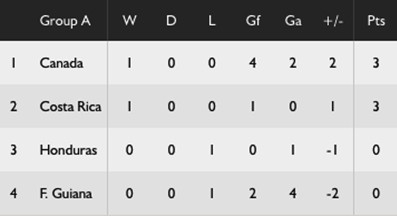 Honduras, the group’s strongest rival, led by former La Sele coach Jorge Luis Pinto, maintained possession of the ball during most of the match on Friday. However, they were never able to capitalize on this dominance with a goal.

La Sele’s game during the first half was inefficient, and goalie Patrick Pemberton was the team’s best player with at least three great saves that allowed him to keep a clean sheet.

Despite the constant pressure from Honduras, Costa Rica managed to score with its only direct shot of the first half. At 38′, forward Marco Ureña connected with the ball inside the box after receiving a pass from Rodney Wallace.

The Hondurans pressed hard throughout the last 20 minutes in search of the equalizer. Their best opportunity came at 74′ when forward Albert Elis sent a potent shot over the goal.

This was Costa Rica’s first victory against Honduras in Gold Cup matches. The teams have faced off five times since 1991, with three victories for Honduras, one draw, and now a victory for Los Ticos.