Storyline: Ebola is actually difficult to get 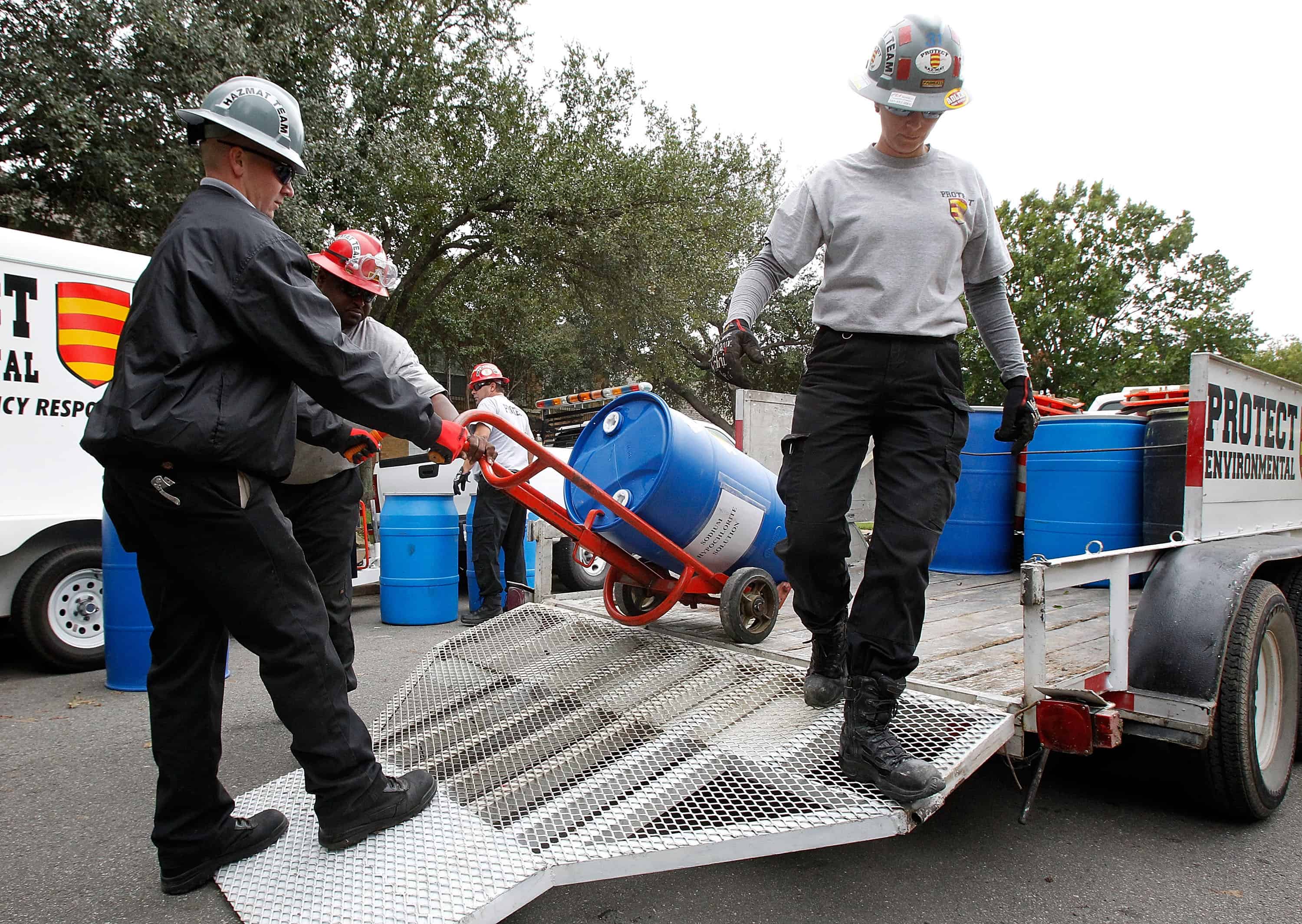 Hazmat workers unload a barrel labeled sodium hypocholorite solution from a trailer outside of an apartment where a second person diagnosed with the Ebola virus resides on Oct. 13, 2014 in Dallas, Texas. Officials say a health care worker who cared for Liberian patient Thomas Eric Duncan has tested positive for the virus. (Mike Stone/Getty Images/AFP)

WASHINGTON, D.C. – A mild fever was the first sign that the nurse in Dallas was infected in Ebola. She started feeling ill last Friday. It was alarming but not a surprise. The nurse, 26-year old Nina Pham, knew she was at risk because she’d helped treat Thomas Eric Duncan, the Liberian man who was the first person diagnosed with the dreaded disease in the United States.

Pham became the first — and so far only — person infected by Duncan. In the wake of her infection, U.S. health officials have pledged to review how future Ebola cases are handled.

But the case is also noteworthy for another, potentially positive reason: Nearly 50 people were exposed to Ebola before the nurse, and none of them has been diagnosed with the disease.

This group of neighbors, family members and first responders is being watched carefully by health authorities. They had some degree of close contact with Duncan during the four-day period when he was contagious — from when he started showing Ebola symptoms on Sept. 24 to when the hospital finally admitted him on Sept. 28. They didn’t take any Ebola-specific precautions. They didn’t know he was infected. Some stayed in the same apartment as Duncan as his condition worsened. Yet, so far, they have not gotten sick. And their 21-day Ebola incubation period started before Pham’s.

“That the casually exposed are not getting sick, it’s reassuring,” said Julie Fischer, an associate research professor of health policy at George Washington University. “What we’ve seen so far, it’s not surprising and it’s not shocking.”

That’s a good thing. This entire harrowing episode is playing out as health authorities predicted. Ebola is acting as portrayed in medical textbooks, based on nearly 40 years of research. Experts said the disease is hard to catch, that an infected person is not contagious until symptoms appear and that Ebola is spread by close contact with bodily fluids such as blood, sweat and saliva.

No evidence points to anything else.

“Ebola is not a terribly infectious disease,” said Joel Selanikio, a former U.S. Centers for Disease Control and Prevention (CDC) epidemiologist. “It’s quite difficult to get.”

The fear behind Ebola is massive. But the virus does not appear to be any more virulent than in previous outbreaks, experts say. Doomsday predictions of Ebola mutating and becoming airborne like the flu have not played out. The “airborne” discussion has frustrated many scientists, such as Heather Lander, who holds a doctorate in experimental pathology and worked in high-security labs with Ebola. It led her to start a blog called Pathogen Perspectives, which delves into the myths and realities of the disease.

“We know how this is spread,” said Lander of Galveston, Texas, and those paths have not changed. “So far, what we’re seeing absolutely reaffirms what we were expecting to see.”

Pham, the nurse at Texas Health Presbyterian Hospital, was infected despite taking every precaution. But she also cared for Duncan during a hospital stay that included dialysis and time on a ventilator. As the disease progressed, Duncan became increasingly contagious. The viral load grew. Invasive medical procedures are known to increase the hazards to health care workers.

“These are high-risk procedures,” Fischer said.

CDC director Tom Frieden said Sunday that a “breach in protocol resulted in this infection,” a comment met by criticism because it sounded like he was blaming Pham. But some health officials saw Frieden’s comment as a way of tamping down fear about a novel infection route.

“This is not an unknown, inexplicable action by the virus,” Fischer said.

Even taking every precaution, things can go wrong. And the margin of error with Ebola is small.

All of this confidence, however, is built on the expectation that the virus continues to act like its historical self.

Pham now faces a fight against the disease. Other hospital workers will need to monitor themselves for symptoms of Ebola until at least Oct. 29, 21 days after Duncan died.

But that window of worry is closing for the group of nearly 50 people who had contact with Duncan before he was admitted to the hospital on Sept. 28. Their 21 days are up Oct. 19, less than a week away.

Considering that the bulk of infections appear in the first 10 to 12 days after exposure, that’s reassuring.