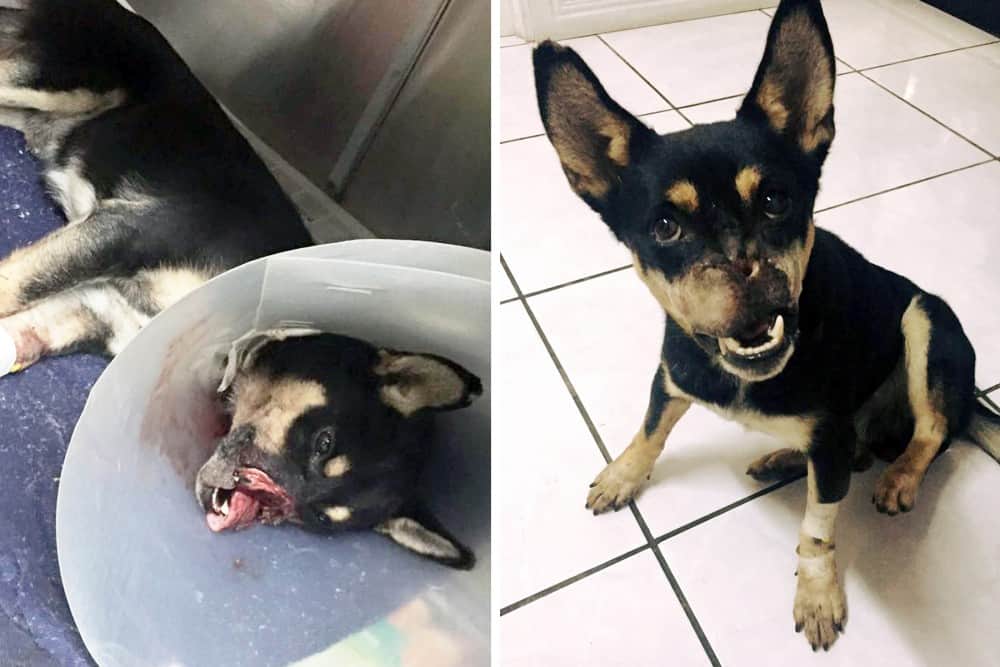 Duke, a mutt that lost part of his upper jaw after suffering an apparent machete attack in July. Duke's case is one of several that have sparked public outrage against lawmakers for failing to pass the animal welfare bill. ((Via Vida Animal Costa Rica’s Facebook))

The Constitutional Chamber of the Supreme Court, Sala IV, ruled unconstitutional on Wednesday various articles of an animal welfare bill currently pending a final vote at the Legislative Assembly.

The Sala IV reported in a news release that the justices ruled 4-3 against an article proposing prison sentences of up to three years for hurting or killing an animal, saying they “violate constitutional principles of reasonableness and proportionality.”

Justices unanimously deemed disproportionate the sanctions and monetary fines proposed in two other articles that set fines of up to two base salaries (some $1,500) for individuals found guilty of animal cruelty.

“Cruelty” as defined by those articles would include promoting animal fights, breeding or training animals to increase their aggressiveness, as well as any action that could cause loss of limb or disability. Individuals could also be sanctioned for performing sexual acts on animals or practicing vivisection on them for purposes not related to scientific research.

The court also objected to an article proposing monetary fines for neglecting an animal, keeping animals permanently tied up, failing to provide them with medical treatment or medicine and intentionally provoking pain.

The bill will now be sent to the Assembly’s Constitutional Affairs Committee to be amended. It could then be put up for discussion and a vote before the full Assembly.

The Sala IV’s ruling came in response to a complaint filed against the bill by Libertarian Movement lawmaker Otto Guevara.

Lawmakers passed the bill on July 26 in a first round vote of 50-4.

In early August, Guevara prevented a second and final vote by securing the support of 10 lawmakers required to send the bill for consultation to the Sala IV.

On Wednesday afternoon, Guevara welcomed the Sala IV’s ruling and said it proved that his arguments were valid. The lawmaker posted a message on his Facebook profile defending his fight against the bill and said his work at the Assembly “is responsible, not populist.”

Guevara has made multiple attempts to prevent the bill’s approval, including filibustering its discussion by filing dozens of motions against the wording.

Citizen Action Party legislator Marcela Guerrero, who is also a member of the Assembly Environmental Issues Committee, said she agrees that some of the fines proposed in the bill should be reviewed. But she said she opposes reducing sanctions for individuals who deliberately hurt or kill animals or who organize animal fights.

Guerrero said the Environmental Issues Committee would wait for the full ruling from Sala IV to evaluate possible actions for moving forward with the bill.

Activists: ‘We will continue to fight’

Juan Carlos Peralta Víquez, president of the Association for Animal Welfare and Protection (ABAA), said he is very disappointed with the justices’ decision and described the ruling as “a slap in the face of all citizens who fight for the rights of all animals.”

ABAA is one of various animal rights’ groups that have demonstrated against attempts to water down the law or prevent it from passing. Activists say removing sanctions would render the law worthless and only serve to punish those who failed to clean up their dog’s poop from sidewalks.

Peralta also leads a citizen movement pushing for a referendum on the animal welfare bill. He told The Tico Times that proponents will turn in signatures of more than 190,000 citizens who support the referendum to the Supreme Elections Tribunal (TSE) on Thursday.

If the TSE approves the referendum, citizens would vote on whether to pass the animal welfare bill, regardless of voting at the Assembly. President Luis Guillermo Solís would have to sign the bill into law.

Costa Rica’s laws allow citizens to request a referendum if they file a petition before the TSE with the signatures of at least 5 percent of registered voters, some 160,000 signatures.

TSE justices have 30 days to verify the signatures and the petition. If approved, the referendum would take place in 2017.