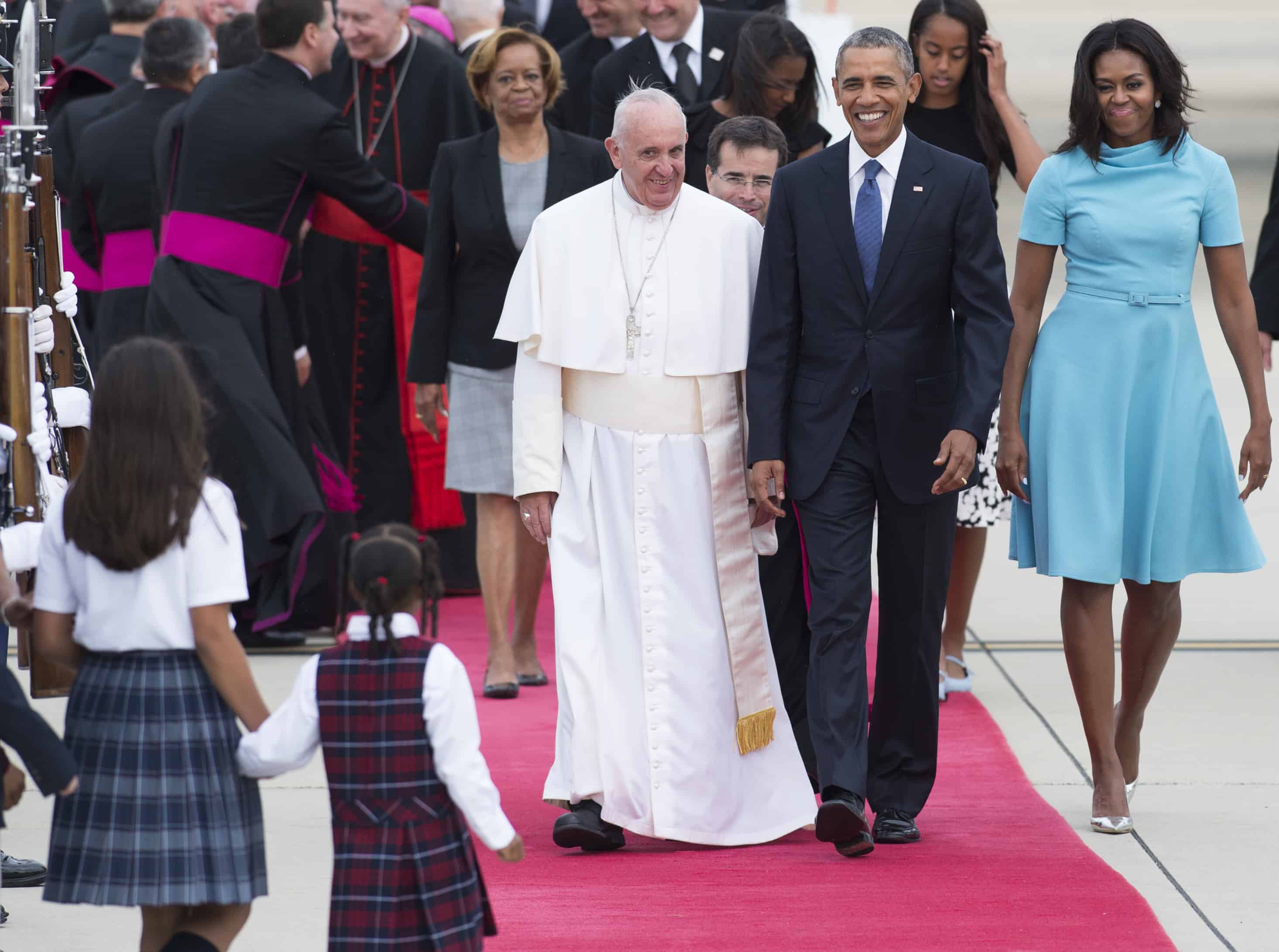 ANDREWS AIR FORCE BASE, U.S. – Pope Francis arrived in the United States on Tuesday for his first visit — a historic six-day trip to the spiritual home of capitalism after his tour of communist-ruled Cuba.

The 78-year-old Argentine pontiff stepped onto U.S. soil for the first time at Andrews Air Force Base outside Washington, where he was greeted by President Barack Obama and his family, as well as Vice President Joe Biden.

U.S. Catholic leaders and a select crowd of several hundred well-wishers were on hand to greet the pope, who wore his traditional papal whites and waved to the cheering crowd. A small group of children from Catholic schools in the Washington area were brought forward to welcome the pontiff.

Obama will host the Jesuit pope at the White House on Wednesday. Francis will make two key speeches during his visit, addressing Congress on Thursday and the United Nations on Friday.

On the plane from Cuba to the United States, the pope told reporters that he would not specifically raise Washington’s embargo on Havana in his speech before U.S. lawmakers, but expressed his opposition to it.

“The Holy See is against this embargo, but it is against all embargoes,” he said.

Topics will include critiques of the dominance of finance and technology; a condemnation of world powers over the conflicts gripping the planet; appeals to protect and welcome immigrants; and climate change, according to Vatican sources.

The visit will take place under tight security, with U.S. authorities on top alert to handle the complexities of protecting a pope who insists on traveling in an open vehicle to be closer to the masses.

Authorities are facing a particular security headache in New York, where Francis plans to criss-cross Manhattan at a time when 170 world leaders will be in town for the U.N. General Assembly.

He will preside over an inter-faith ceremony at Ground Zero, visit a Harlem Catholic school and greet crowds on a procession through Central Park.

He will wrap up his trip Saturday and Sunday in Philadelphia at an international festival of Catholic families. Supporters cheer for Pope Francis after he arrives from Cuba on Sept. 22, 2015 at Joint Base Andrews, Maryland. Chip Somodevilla/Getty Images/AFP

The pope arrived from Cuba, where he visited three cities in four days, said three masses before adoring crowds and met President Raúl Castro and his big brother Fidel, the men who have ruled the communist island since its 1959 revolution.

The pontiff, the first from Latin America, played a key role in brokering the recent rapprochement between Washington and Havana, which resulted in the restoration of diplomatic ties in July after more than half a century.

In the United States, he will find a U.S. public that widely respects him, but has a less favorable view of the Catholic Church. While 81 percent of Catholics have a positive view of the Church, only 55 percent of U.S. citizens as a whole do, according to a new poll conducted by The Washington Post and ABC News earlier this month.

But for some critics, the dominant themes of his papacy — his critique of consumerism, calls to embrace poverty and condemnation of a “throwaway culture” — sound suspiciously like an indictment of the U.S. way of life.

That was underlined ahead of his trip when relatively unknown dentist and Republican Congressman Paul Gosar, who is Catholic, declared he would boycott the pontiff’s historic address to Congress to protest his “leftist” views. (Gosar, apparently, is busy anyway, at the Copper State Shooting Range with one of those annoying toy dogs, according to his Twitter account.)

Enjoying some time with one of my 4-legged furry constituents at the Copper State Shooting Range. #AZ04 pic.twitter.com/csrmjUsWvP

The pope has been active in urging compassion, including for those historically shunned by the Church, and for calling for action against economic inequality and environmental degradation.

In general, U.S. respondents say they approve of those efforts, with 54 percent wanting him to “continue as he has been” and another 23 percent urging him to be even more active.

‘A revolution of tenderness’

During his Cuba visit, Francis discreetly refrained from chastising the communist regime for its crackdowns on dissidents and curbs on civil liberties.

Before leaving the island on Tuesday, Francis said mass in Cuba’s second city Santiago, cradle of the Castros’ uprising against dictator Fulgencio Batista, calling for a new kind of “revolution.”

Speaking at a basilica to Our Lady of Charity of El Cobre, Cuba’s patron saint — a mixed-race Mary that symbolizes the island’s intertwined Spanish and African roots — he praised her as the embodiment of a “revolution of tenderness.”

He urged Cubans to follow her example “to build bridges, to break down walls, to sow seeds of reconciliation,” in comments that appeared to allude to the nascent reconciliation across the Florida Straits.

Francis then addressed an audience of families, asking for their prayers as he prepares for a synod on the family next month that has unleashed internal conflicts among the Roman Catholic clergy over sensitive issues such as divorce, homosexuality and unmarried couples.