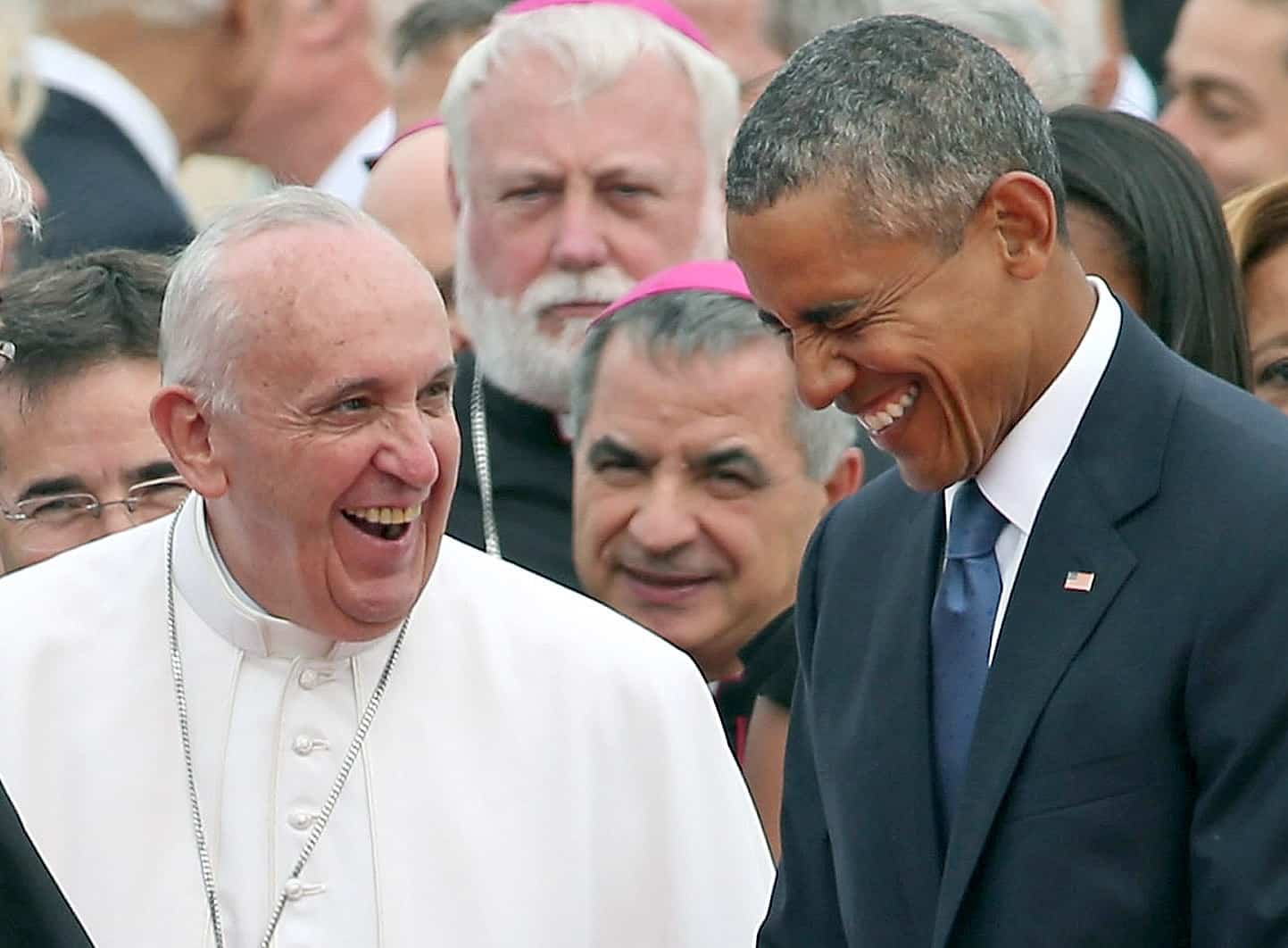 Pope Francis is escorted by U.S. President Barack Obama as he greets other political and Catholic leaders after arriving from Cuba on Sept. 22, 2015 at Joint Base Andrews, Maryland. Francis will be visiting Washington, New York City and Philadelphia during his first trip to the United States as Pope. (Chip Somodevilla/Getty Images/AFP)

Pope Francis’s six-day trip to the U.S. is highly anticipated – and not just among U.S. Catholics. The pope’s progressive stances have earned him nearly unprecedented favor with liberal-leaning North Americans, and his aggressive position on climate change has been one of his most applauded moves.

While the pope has made his concern about human-caused climate change known on numerous occasions, his position was largely summed up in his second encyclical, “Laudato Si,” released earlier this summer – a document that made headlines around the world for being the first papal encyclical based entirely around environmental issues. Now, as Pope Francis makes his way through Washington, New York City and Philadelphia, climate activists are expecting a reaffirmation of his commitment to environmental issues and to climate action in particular.

In the past, the pope has received criticism for what some experts perceive as a somewhat simplistic understanding of the economics of climate change interventions, a field he’s professed is not his strong suit. In particular, his suspicion of carbon pricing has garnered negative feedback from experts pointing to its past success as an emissions reduction strategy. And some have pointed out that the arguments the pope presents in his encyclical hardly offer any new information to the climate change conversation.

But there’s a lot that Pope Francis gets right about climate change – in particular, a deep understanding of the ways it will affect the most vulnerable people and places in the world.

Here are some of the highlights:

1. Climate change is linked to every aspect of life on Earth.

More and more, scientists are emphasizing the fact that climate change isn’t just about global warming. Temperatures will rise, yes, but they’ll also bring about a complex series of intertwined effects that will have consequences for many aspects of life on Earth. These include sea level rise, changes in global weather patterns, agricultural losses, declines in water quality and availability, reductions in biodiversity and even the potential for forced migrations and civil unrest.

In his encyclical, Pope Francis expresses an understanding of this complexity when he writes, “At the global level, [climate change] is a complex system linked to many of the essential conditions for human life.” And, indeed, this attitude is reflected throughout the rest of the document, which goes on to describe a number of interconnected environmental concerns, including pollution, water quality, deforestation and loss of biodiversity – all of which could be exacerbated by a changing global climate, or even help accelerate global warming.

And because humans depend on natural resources to support so many aspect of life on Earth, the pope also writes that the effects of climate change will not just manifest themselves in the form of environmental degradation: These implications will also be “social, economic, political, and for the distribution of goods.” In other words, all aspects of the planet, including the finest details of human infrastructure, have the potential to be affected.

Pope Francis also understands the global carbon cycle and the ways in which human activities can influence it. In his encyclical, he writes that warming “creates a vicious circle which aggravates the situation even more” – a statement backed up by considerable science.

As the pope goes on to describe, many of the consequences of climate change also have the added effect of contributing to more global warming in a sort of feedback loop. “The melting in the polar ice caps and in high altitude plains can lead to the dangerous release of methane gas, while the decomposition of frozen organic material can further increase the emission of carbon dioxide,” he writes. The release of this extra gas further accelerates warming, which then causes more melting and thawing – a vicious cycle. Less ice in the Earth’s polar regions also means that less sunlight is getting reflected back out into space. More sunlight being absorbed in these regions can cause more warming, which leads to more melting.

Francis also notes that climate change has the potential to affect some of the Earth’s most important carbon sinks, like forests and oceans. These sinks absorb carbon emissions that would otherwise go into the atmosphere. But as the pope notes, the effects of climate change can damage their ability to absorb carbon. For example, if droughts, fires or extreme temperatures cause forests to die off, they can no longer act as carbon sinks. Additionally, dead forests release all the carbon they previously contained into the atmosphere, leading to even more warming. Perhaps the pope’s biggest point of all is that this isn’t just an environmental issue – it’s a human issue, one which experts agree will disproportionately affect the world’s poorest and most vulnerable people.

Study after study has concluded that the world’s developing nations – those countries least responsible for changing the climate in the first place – will face some of the worst climate-related effects, including sea-level rise, extreme weather events and drought. Additionally, the people who will likely suffer the most from these effects, which are expected to have big consequences on global food and water supplies, are those already living in poverty.

Historically, the Catholic Church has placed a great emphasis on issues of social justice, and Pope Francis has established a particular reputation as a champion of the world’s poor and disenfranchised. So it’s not surprising that he has made the social aspects of climate change one of his biggest platforms.

“We are faced not with two separate crises, one environmental and the other social, but rather with one complex crisis which is both social and environmental,” the pope writes in his encyclical. “Strategies for a solution demand an integrated approach to combating poverty, restoring dignity to the excluded, and at the same time protecting nature.” 4. Developed nations must lead the way in reducing emissions.

Noting that the world’s developing nations are likely to be hit hardest by climate change, Pope Francis also acknowledges that developed nations must bear the greatest burden when it comes to reducing carbon emissions.

The pope touches on one of the biggest international sticking points when he writes:

“The developed countries ought to help pay this debt by significantly limiting their consumption of non-renewable energy and by assisting poorer countries to support policies and programmes of sustainable development. The poorest areas and countries are less capable of adopting new models for reducing environmental impact because they lack the wherewithal to develop the necessary processes and to cover their costs. We must continue to be aware that, regarding climate change, there are differentiated responsibilities.”

This idea has arisen time and again in the global climate discussion, but became a particular focus of discussion at last year’s UN climate summit, when many developing nations in attendance reasserted that wealthy nations like the United States should bear a burden of the world’s emissions reduction goals proportional to the amount they’ve already contributed to global climate change. 5. Greater international cooperation will be required to address the issue.

Building on the previous idea, the pope also acknowledges that a greater, more unified global effort will be necessary if we’re going to prevent the worst effects of climate change. The efforts that have been put forth so far by world leaders may be a good start, but so far they’re not enough.

The pope writes, “It is remarkable how weak international political responses have been. The failure of global summits on the environment make it plain that our politics are subject to technology and finance.” And indeed, on the climate front, international responses are still falling short. Granted, many nations have put forth ambitious carbon-slashing goals for the coming decades – but, cumulatively, many experts agree that it’s still not enough.

Worldwide, policymakers have set a goal to keep global temperatures from rising more than 2 degrees Celsius above their preindustrial levels, a threshold intended to prevent a catastrophic series of climate-related effects from taking place. But so far, the goals that have been submitted by countries around the world don’t look as though they’ll cut emissions by enough to meet that goal.

While there’s still time to enact more aggressive environmental policies, international cooperation is of the essence. The biggest test this year will take place in just a few months at the 2015 U.N. climate summit in Paris, where world leaders will meet to discuss their emissions reduction plans. A clear dialogue and a unified approach to the climate problem will be necessary for the summit to be successful.

And whether or not he’s right about this one, the pope seems to be optimistic that such cooperation is still possible. He writes, “Although the post-industrial period may well be remembered as one of the most irresponsible in history, nonetheless there is reason to hope that humanity at the dawn of the twenty-first century will be remembered for having generously shouldered its grave responsibilities.