Planet, People, Peace conference: How tourism can help save the world 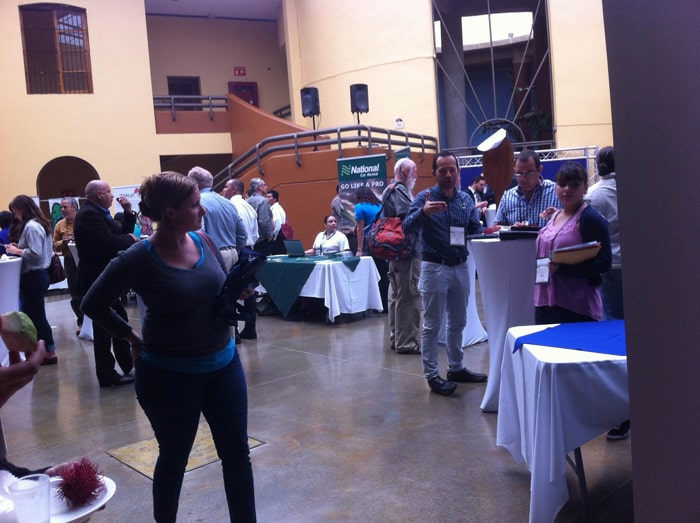 Just after a morning coffee break at the Planet, People, Peace sustainable tourism conference Thursday in San José, some 340 attendees were told that it takes up to 140 liters of water to make one cup of coffee. So that coffee break just cost the planet 47,600 liters of water.

Nydia Suppen, director of Mexico’s Center for Analysis of the Life Cycle and Sustainable Design, said it takes 20 liters of water to make one liter of beer. So maybe a beer break would have been more sustainable.

“Water is fragile, scarce and indispensable to life,” said Yamileth Astorga, executive president of the Costa Rican Water and Sewer Institute. “It’s a resource that can run out.”

The three-day international conference, which kicked off Wednesday at the Jade Museum with remarks by Vice President Ana Helena Chacón and other dignitaries, continued Thursday at the Children’s Museum and concludes there Friday. (If you’re interested, you can attend Friday’s session at Museo de Los Niños starting at 8:30 a.m. for $100.)

With 25 exhibitors and dozens of speakers from all over the world, the conference is dedicated to sustainable tourism and raising awareness of environmental issues related to tourism.

Astorga said tourists consume 3 to 15 times more water than non-tourists (no figures available on beer). And she said 85 percent of the water in Costa Rica is potable, reducing the need for plastic water bottles.

She said that while showers can use 20 to 30 liters of water per minute, more efficient showers use only 5 liters. In dry tropical environments like Guanacaste, she said, water usage would be greatly reduced if hotels planted gardens appropriate to the environment rather than vast green lawns.

Raúl Gauto of Paraguay, another expert on international water issues, said 74 percent of the planet is water — “I don’t know why they call it Earth” — and yet 36 million people in Latin America lack access to safe drinking water.

Turning from “Water” to “Earth” after lunch, Arturo Condo, former director of the Harvard-affiliated INCAE Business School, presented some eye-opening statistics on Costa Rican tourism. He showed the audience a graphic describing a study that ranked Costa Rica No. 1 among the top 10 world destinations for nature, and No. 2 for adventure after New Zealand.

The next graphic compared the countries of Central America as travel destinations. Costa Rica was  first in natural resources and last in affordability — “because we’re quote-unquote ‘expensive’,” Condo said.

Condo asked the audience to guess the record amount spent by a tourist for an all-inclusive vacation that lasted around nine days. The answer was $35 million — to fly into space with Russian cosmonauts. And they say Costa Rica is expensive.

Amy Carter-James, the British co-founder of Guludo Beach Lodge in Mozambique, told a delightful story about how she and her husband started a hotel and a charitable foundation in an extremely remote part of Africa where thousands of people had little or no access to safe drinking water, health care or education.

“Every business has a responsibility and can do more and can help the world,” she said, “but tourism has got far more potential than any other industry because there’s so many opportunities to get involved.”

Their first decision was to locally source all building materials and everything else the hotel needed — which provided an instant economic stimulus to this poverty-stricken beachfront.

But Carter-James and her husband went far beyond the call of duty for new business owners. They organized projects that provided safe drinking water for over 20,000 people, taught mothers of young children how to prevent malaria, built schools, fed the schoolchildren and funded scholarships so they could go to high school.

“But you need to come back to participation,” she said. “It’s not a case of us foreigners coming in and saying, ‘Right. You need a school. Let’s build you a school.’ It can’t work like that….

The school got built, and others followed. “The pride of a community that has a primary school is insane,” she said.

Addressing an audience of tourism professionals, some with fairly deep pockets, Carter-James said, “It’s great to be able to tell you about a success story. You know, if this small, little hotel in remote Mozambique can do this, just imagine what the rest of the industry can do.”

She showed a picture of a smiling village elder who was asked by a hotel guest a few years ago to describe the difference in this region before tourism arrived and now.