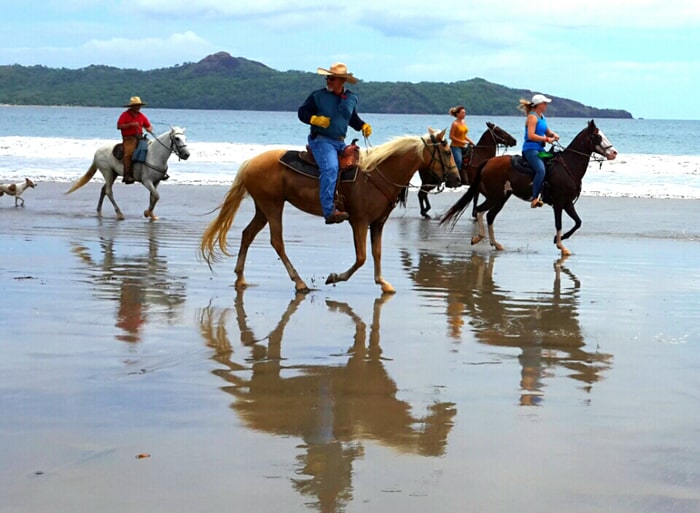 Horseback riding on the beach: What's not to like? ((Courtesy of Painted Pony Guest Ranch))

You meet all kinds of people who come to Costa Rica: fishing people, surfing people, golf people, nature people. And then there are horse people.

Kay Dodge is a horse person. For that reason, 22 years ago, she purchased 50 acres in a little unnamed area near the Monkey Park in Portegolpe in Guanacaste, not far from Tamarindo. Today on this land, she and her husband, Esteban Peraza, run both the Painted Pony Guest Ranch and Casagua Horse Farm, offering horseback riding for all levels of experience in all kinds of terrains.

Upon entering the property, you enter a world that reminds you why you came to Costa Rica in the first place. Surrounded by trees, flowers and grass, you’re treated to a complete immersion in the hacienda experience. There are two riding rings and a round pen for training, 16 stables occupied by 32 horses, a tack room (nicknamed The Alamo), the beautiful main house and a guest house for clients and tourists who opt to spend their time in Costa Rica at a horse ranch.

Dodge designs custom tour itineraries for her clients, who find her place via the internet or word-of-mouth. These packages range from two to 10 nights, and include horse rides and/or lessons, as well as area tour options. Guests stay at the quaint B&B on-site, with delicious catered meals on the garden porch of the main house or at the Rancho. Itineraries can be structured to include visits to Arenal Volcano, Monteverde, Nicaragua or elsewhere.

“People that stay with us are riders,” said Dodge. “We started this vacation option eight years ago and the reason we did that was because people were asking for a place to stay when they were coming down to ride with us.”

Jeanne Cordes, who boards her two horses at the ranch, said, “Kay and Esteban have created ‘horse heaven’ on earth. … It is a magical farm combining a blend of Costa Rican ambience and a professional safe haven for horse lovers.”

At the Painted Pony Guest Ranch, lessons and trail riding are the primary function of the business, while Casagua boards up to five outside horses at a time. As you’d expect, the ranch provides a variety of daily trail rides for experienced riders, and offers lessons for beginners. These trail rides, however, are not for beginners.

“Our horses, you’ve got to ride,” she warned. “When we have beginners, they are here with lessons first. These are horses that will run.”

As a tour operator, Dodge says a horse ride is all about safety. For example, no one 4 years old should ride alone, and the minimum age to mount up is 6.

“Then again, a child with four years of lessons could well be better than their parents,” she said with a laugh. On the other end of the spectrum, there are the Silver Saddles, shorter trail rides designed for people over 50, with an option for a post-ride massage.

Even though trail rides can be customized to the client’s desires, one of the most popular regular tours offered at Casagua is the Tico Trail and Cantina Tour. On this adventure riders move through small local towns and ranches with a stop at a cantina for refreshing beverages. And people are always asking to go horseback riding on the beach, so they may do so in the Forest to Sea Tour, which begins with a ride though the dry tropical forest to the beautiful beaches of the area, depending on the tides.

“We are conscientious about tours on the beach. We only go at low tide, never in Tamarindo, and never on holidays,” Dodge said, reasoning that it’s best to ride on less populated beaches to protect both the people and the environment.

Dodge has always been ecologically minded. Originally from Grand Rapids, Michigan, she was a high school teacher, then college professor, who brought down students from the ’70s onward to study the flora of Costa Rica. The Dodge-led groups traveled around the whole country, which she recalled was a different place in those early days: “We really saw Costa Rica.”

“As a biologist and ecologist, I brought students to work in Costa Rica because this was a country you could come and study because of its massive biodiversity, and in the ’80s Costa Rica was very conservation-minded,” she said.

During the terms of President Oscar Arias, Dodge raised funds for Costa Rica conservation and had an office in San José, where she was president of the Centro de Estudio Ambiental, as well as of the Center for Environmental Studies in Michigan. She eventually helped raise over $10 million for Costa Rican conservation.

Finally, in 1989, she bought the ranch as a place to keep her horses and a friend’s, but it wasn’t until two years later that she moved here full-time.

“It was my dream after my first trip to have horses and to someday retire in Costa Rica,” Dodge said. “Originally, the business here was a tree nursery, a ranch for the conservation group Tree Amigos. We had 30 different types of trees. At the same time, families that lived here boarded their horses on the ranch. Kids came out to learn about why it was important to plant trees. Costa Rica was big into reforestation.”

Then one day, one of the horses got hurt, and Dodge called a vet. Esteban Peraza, who specialized in farm animals, showed up to care for the injured horse. She was so upset by its injury that she paid little attention to the handsome vet. Later, in Santa Cruz, she ran into him at a Chinese restaurant and shared a favorite horse book of hers with him.

Four or five days together included a tope ride in the Santa Cruz fiesta, and that was it. He went with her back to Michigan for a visit. Three years later they got married. For the ceremony, Peraza came in on a white horse like in a fairy tale. After the ceremony, Kay rode a stallion and he rode the white horse. They’ve been married nearly 23 years now, and Peraza trains all the horses and attends to their medical needs as well.

Dodge is proud of the horse training at Casagua. They use a method called “natural horsemanship,” which trains the animal in a gentle way, in tune with their natural behavior.

“A lot of people think riding a horse is breaking or dominating it. We are the opposite of that: If you understand a horse you can become a partner with it,” Dodge said. “Look at some of the horses riding around here and you will see scars on the nose and back, no shoes. You can see it in the horses’ eyes. You want to ride a horse that wants to ride with a human.”

The horses raised here are “imprinted” with a human right at birth. The foal sees its mother first, then in the next few hours when on its feet, people surround it and the animal imprints on humans, making them comfortable around people forever more.

“We become a funny-looking horse on two legs to them,” she said.

“We care about our horses a lot,” she added. “This is one of the only places you can still ride a horse that’s 20 years old. Many people run their horses into the ground. Ours are not ridden until they are 3 or 4 years old, because they just undergo training until then.”

And which of these horses is Dodge’s favorite? A 23-year-old mare named Chicano, who also happens to be the daughter of Oaxaca, the horse that fell and needed the vet, who became her husband.

“She and I are one,” she said. “When I ride her it’s like silk; I can just think and she moves. We know each other and our movements. I completely trust her and she trusts me. That’s what happens when a horse grows up with you. She was born a month before I moved here permanently and trained with natural horsemanship.”

Getting there: The ranch is located just outside Portegolpe, on the road from Belén to Huacas in Guanacaste.
Rates: Packages include 3- to 7-night “Natural Horsemanship Riding and Training” starting at $695; 5- to 7-night “Taste of Guanacaste Adventure Package” starting at $895; and 6-night “Old Spanish Trails and Pacific Beaches” starting at $1,795. Daily lessons are also available.
Phone: (506) 2653-8041
Email: info@paintedponyguestranch.com
More info: http://www.paintedponyguestranch.com