Las Cruces: Predator and prey in a jolly green giant of a garden 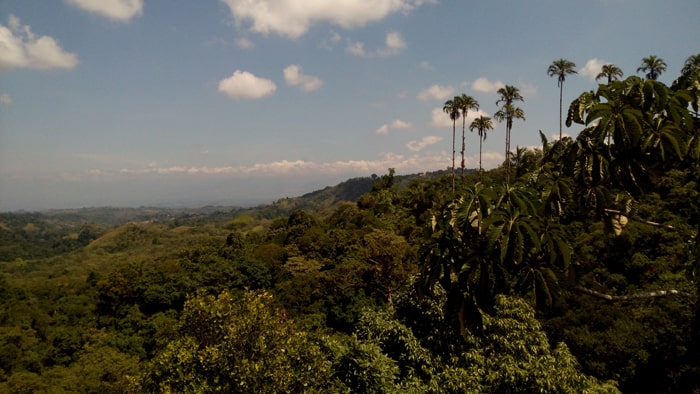 SAN VITO, Puntarenas — You know you’re seeing something unusual when your tour guide gets excited, and that happened twice as I walked around the Wilson Botanical Gardens and Las Cruces Biological Station with 31-year-old Ricardo Pérez Durán.

I was the first to spot the agouti, which looks like a rat on steroids, and I said, “Paca!” Ricardo said, “Agouti,” shrugging off the sighting as common. But then the agouti took off like Usain Bolt, sprinting for its life, and Ricardo saw why.

“A tayra, a tayra, look at the tayra!” he said, pointing at a long, black weasel on a log above where the agouti had been. “That’s a really unusual mammal right there.”

The second time Ricardo was surprised also involved predator and prey — and a fresh kill — but more on that later. Also, remind me to tell you that this place is haunted, but first I should tell you what this place is.

If the Jolly Green Giant had a garden, it might look something like this. The 902-acre Las Cruces Biological Station, a remarkable nature preserve in far southern Costa Rica, is one of three properties administered by the Organization for Tropical Studies, which is devoted to research and education on tropical biology. Las Cruces includes the Wilson Botanical Gardens (founded by Robert and Catherine Wilson in 1963), an extremely diverse collections of native and foreign tropical flora, including the world’s second-largest collection of palm trees.

“Fairchilds Garden in Florida,” Ricardo said. “Here we have more than 700, and there I think there is like 2,000 different species.”

Ricardo had an amazing memory, so I asked him if he knew the names of all 700 species.

I’ve spent hours with scores of tour guides in Costa Rica, but Ricardo soon distinguished himself as among the very best I’ve met. Born in 1985 (“un modelo ’85”), Ricardo has already forgotten more about tropical biology than I’ll ever know. His English is outstanding, though he often lapsed into Spanish with me (his only companion on today’s tour) because he knew I understood.

He asked if I knew there was fantasma on the property — a ghost!

“In the rooms, and here in the Wilson House,” Ricardo went on, “they say sometimes she comes out.” He was referring to Catherine Wilson, the deceased grand dame of these gardens, who died in 1984. “The taxonomist says that over by the kitchen he was going down the ramp late at night, and … she appeared there, she was standing halfway down the ramp.”

“The Haunted Gardens!” I exclaimed in English.

Most of the time Ricardo stuck to a more scientific script, like when he told me about how many vertebrates there were at Las Cruces. Of 250 species of mammals in Costa Rica (114 of which are bats), Las Cruces has identified 116. Of 240 reptiles, it has described 70. Of 196 amphibians, it has found 45.

“And you just carry these numbers around in your head?”

Call him strange, but the three most amazing facts about Ricardo Pérez are:

No. 3. He learned English as a child playing Super Mario and watching foreign sitcoms.

No. 2. He was bitten by a bullet ant as an adult in Tortuguero, and he cried for two days.

No. 1. He used to play for Saprissa, one of Costa Rica’s two greatest soccer teams.

“I played for Saprissa.”

“No way!” Ricardo was not large, and I had seen no evidence that he was fast.

“Yeah.” Ricardo said he played under the current coach, Carlos Watson. “I started as a defender and then I was the creator of the game, so the midfielder.”

“How is a midfielder ‘the creator of the game’?” I asked.

“Because midfielders need to create spaces and observe,” he said. “Biologists observe and hear a lot. It’s like in chess. That’s why I love to be in the midfield, creating plays.”

He said even when the ball is not around, midfielders know exactly where their teammates are, and they’re ready to set up the next play. I didn’t have to ask about the importance of controlling the center in chess.

We stumbled upon some huge bumblebees buzzing around the flowers of an aromatic anthurium. Then we wandered over to a similar plant that was pollenated by wasps, and Ricardo told me a story about the most fearsome wasp in Costa Rica, and the tarantula’s greatest nightmare.

“That wasp [the tarantula hawk], there was an American entomologist that studied the venom of several wasps and scorpions and he developed an index called the Schmidt sting pain index,” Ricardo said. “And the tarantula wasp — that index goes from 1 to 4 — and that wasp has 4. It has the second most painful sting worldwide.”

“And what about the bullet ant?” I asked.

“The bullet ant is the first place,” Ricardo said, and we laughed. “The bullet ant has plus-4. And trust me, in my experience. A few years ago I was looking for snakes at Tortuguero National Park, and I was just taking a break to check my shoes, like this [leaning a hand on a tree], and one of the bullet ants was behind that tree and got my finger.

“And trust me, it will be impossible avoiding to cry. You’ll cry and cry and cry for two days. And my hand got like twice as big. It’s a memorable sting. It pretty much feels like a bullet through your skin.” But if you’re a tarantula, you’d rather bed down with bullet ants than face one of these tarantula wasps.

“They sting the tarantula, they don’t kill it, it’s like an anesthetic,” Ricardo said. “They grab the tarantula and take it home, and there they lay a single egg on their belly.” I asked if this happened while the tarantula was still alive, and Ricardo said yes, but “kind of dormant.”

The wasp covers the hole in the belly of the doomed tarantula, and pretty soon the larvae start hatching.

“And it’s even more interesting because those larvae are able to avoid [the tarantula’s] vital organs, for like having the tarantula alive as much as possible,” Ricardo added.

I loved my cabin at Las Cruces, as it had two double beds with nice pillows and blankets; a desk with a digital clock, a telephone and a fan; a balcony directly connected to the wild world outside; and a private bathroom with hot water. There wasn’t even a sign in the bathroom advising me on the No. 1 thing not to do if going No. 2. I set my clock for 6, but I love to sleep in the morning, so I happily dozed off again, expecting a huge buffet that would be open for a full hour. I heard the people clinking plates at 6:30, but I didn’t get up and wander over to the comedor until 7 — when the place was totally deserted.

I found half a bowl of cold gallo pinto and a few slices of watermelon and cantaloupe, which I devoured with little gusto.

But on the way back, he stopped, puzzling over a collection of fresh feathers on the path. There were at least a dozen little feathers in a little circle on the trail, and Ricardo said they hadn’t been here when we walked past this place a half-hour ago.

“A hawk killed a flycatcher,” said Ricardo, sounding like a homicide detective from “CSI: Costa Rica.”

I picked up an inch-long gray feather tinged with yellow, pondering how unpleasant this fellow’s final moments must have been.

Darwin said nature is red in tooth and claw. Yet in this fresh kill zone there was not a single drop of blood, probably because the hawk flew off with the flycatcher to eat it elsewhere.

They say God’s favorite colors are green and blue, and in this garden I found that hard to dispute.

Getting there: San Vito is very close to the Panama border in Costa Rica’s inland southwest. You can get there by plane, bus or car. If driving from San José, take the Inter-American Highway (Hwy. 2) long past San Isidro de El General, and look for the turnoff on Hwy. 237, which crosses the Río Terraba. From here it’s a straight shot on a curvy road to San Vito.
Rates: I paid $95 per night for lodging, three meals and a tour. You can also pay $65 for only one meal a day. Rates lower in the rainy season.
What to bring: Shoes for doing a lot of walking, warm clothing for cool nights, rain gear in the rainy season.
For more info: http://threepaths.co.cr

The Tico Times checked in anonymously at Las Cruces and paid full price for lodging, meals and tour.