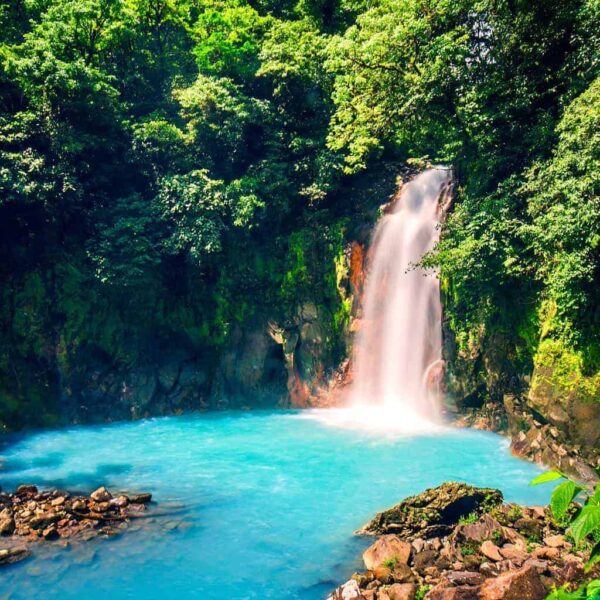 In Uvita, the whale brings a big wave of tourism 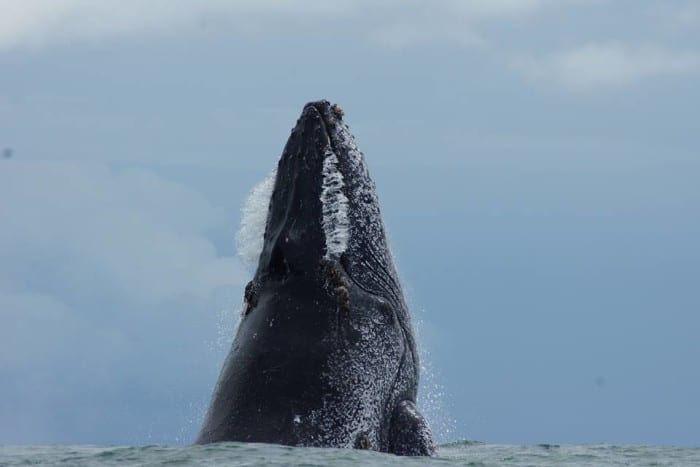 People in Uvita refer to the whale as the engine that drives the local economy. ((Courtesy Bahía Aventuras))

UVITA, Puntarenas – Layers of brilliant emerald climb toward the clouds, walling off a coastal village from all else but the seemingly endless reach of the Pacific. Hotels and condos dotting the forest are reduced to tiny white and red freckles in this lush setting, where palm trees bend lazily over persistent waves.

From our vantage point on a Bahía Aventuras tour boat off Costa Rica’s Pacific coast, Ballena Marine National Park surrounds little Uvita – a fishing village with a full-time population that hovers around 1,000 people – to make it appear as if its blossomed into a large, unconquerable mass of gorgeous earth.

As our boat churns farther away from the expanding coastline, dolphins pop out of the water on each side. Some lead the ship’s bow while others follow behind to ride the constant current streaming from the motor.

“There they are, guys, the best surfers on the planet,” says tour guide Dean Moreno. Under his ballcap and a one-size-too-large shirt, the baby-faced 18-year-old points to the pantropical spotted dolphins that launch through water and air with astonishing ease. The more spots they have, the older they are, he says.

And in Uvita, where international tourism is less than a decade old and steadily growing, it’s dolphin and whale tours like this that spur the town’s livelihood. “It’s the lung, it’s where the big majority of people work, so now everyone here can eat,” Moreno said.

Though the whales remained elusive during my tour with Bahía Aventuras, manager Rafael Sanchez Rosales said sightings ramp up as migrations peak in August and September. The day after my trip, groups encountered a pod of Bryde’s whales. Sanchez and Moreno said all the tour companies operating in these waters will communicate through their boats’ radios if one of them spots a whale.

The area’s 18 boat tour operators eschew petty competition in favor of sharing the spectacle, a cash cow for the community. As Sanchez said, they know people aren’t coming to Uvita for the same reasons they’re going to Manuel Antonio or Jacó.

“The rest of the attractions aren’t as strong here, they’re complements basically,” said Sanchez, who has worked in local tourism for the past decade. “If it wasn’t for the whale, it’d be pretty difficult.”

Laura Ruiz Madrigal, who is the secretary for the Costa Ballena Tourism Chamber, estimated that 98 percent of tour operators in Uvita and the national park area focus mainly on whale-watching tours.

“It’s vital for our community,” Ruiz said. “Without it, our local economy would die.”

Nearly every business in Uvita, if it doesn’t have ballena already in its name, pays homage to the mythologized mammal with pictures or paintings adorning the walls. People in town will tell you if tour boats from the previous days spotted whales in the area. A festival held each weekend of September celebrates the peak season for whale watching, while welcoming up to 5,000 tourists in a single weekend last year.

The famous whale tail-shaped sandbar would be far-fetched for a fairy tale, yet nature’s symbolism hints at Uvita’s magical connection with the animal every day during low tide. And beyond the iconic tail, operations like Bahía Aventuras line the waters in search of signs of the whale.

On our tour boat, Moreno and two other guides led a group of students from the exchange program Rustic Pathways along the Pacific Coast to Isla Ballena, a rocky island covered in moss and the occasional coconut tree, as well as to the secluded Playa Piñuela.

So even with no sightings of the whale, the animal’s influence remains heavy in giving tour operators an attractive day trip on the water during the rainy season.

“Really it’s the engine for this community,” Sanchez said. “We’re close to Corcovado National Park and Isla del Caño, but those are seasonal activities. They’re activities that are designed for the dry season alone.”

While tourists stay away from most beaches as daily rains settle in across Costa Rica’s coasts, they flock to Ballena Marine National Park in these same months, turning everyone else’s low season into Uvita’s high season.

Bryde’s and humpback whales, which reach up to 50 feet long, are the most common to pass through the park’s waters. The males generally arrive first in the migration north and are then followed by the females and offspring. For the seventh annual Whale and Dolphin Festival this September, a drove of tourists, mostly Costa Rican travelers, are expected to eclipse last year’s record numbers to witness the whales’ passing.

“Part of it is the wonder of being so close to a majestic animal,” Ruiz said. “There are not many tours like that in any other parts of the country.”

But as Uvita becomes more popular with travelers, the community is determined to keep away chain businesses and all-inclusive resorts. Though tourism has really only kicked off in the past eight years, Ruiz says, locals look at other parts of Costa Rica and are leery of having foreign fingerprints stain their largely untouched village.

“I think everyone wants to learn from the mistakes that were made in Guanacaste, for instance,” Ruíz said. “As Costa Ricans we can’t tell you Guanacaste’s identity anymore. We don’t want it to be like that.”

The people also seem to have the local government’s backing on these issues, as municipal code keeps all building developments to a two-floor maximum height in order to protect the park’s views. Sanchez said luxurious hotels might bring some employment, but most of the occupants end up staying on the property and not investing in Uvita.

So though high-caliber resorts like Cristal Ballena and Kura have popped up in the neighboring mountains, they cater to ecotourist crowds that are encouraged to participate in area tours.

Under the view of some hotels and private houses nested in the high-arching jungle above, Moreno and I walked through the narrow dirt roads of Uvita after a morning on the water. Moreno, who was born and raised here, stopped along the way to chat with neighbors and friends.

“Here without whales, without tourism….”

He paused. “Its just something that has to happen for us.”