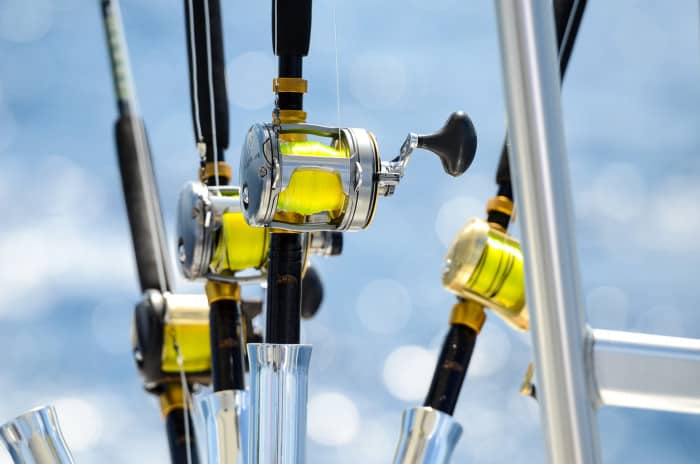 I caught a huge fish. I swear it was like 6 feet long and weighed around 80 pounds. A sailfish. Fighters, those suckers. But I tired him out and reeled him in. For real. What’s that? No, sorry, I don’t have any photos to prove it. We don’t remove the fish from the water when sportfishing in Costa Rica.

Many fishing expeditions leave from Costa Rica’s Southern Zone. The city of Golfito, one of the region’s main towns, is a long, narrow strip of plantation-style urbanism amid untamed jungles. As we pull away from shore, the town quickly disappears and it feels like the mountains shoot right out of the sea.

Within minutes all we see are densely forested mountains, the sapphire Golfo Dulce, and the rising morning sun. It’s a scene that remains much as it was before humans entered the fray, and one half-expects to see a pirate hiding in a remote cove. We spy a few other fishing boats, some stingrays, sailfish, and dolphins.

Golfito was the sportfishing capital of the world during the 1970s, 80s and 90s. “Not anymore,” said captain Donald McGuinness. “Panama and Guatemala protect their fish. We don’t. Something has to change. [Costa Rica’s] government has to take measures similar to those our neighbors have. ”

According to the Costa Rican Fishing Federation (FECOP), anglers bring in $331 million to the country annually. This income is spread out among ship captains, hotels, restaurants, marinas, entertainment, and other tours, thus helping to sustain a wide population beyond fishermen.

In order for this source of income to continue to flourish, “support from governmental entities is very important,” said Enrique Ramirez, executive director of FECOP. “It’s calculated that the export value of a sailfish for consumption is between $123 and $150, while a live sailfish for sportfishing is worth between $3,200 and $3,800,” he continued. Costa Rica’s sportfishing industry is working to spread the word on the value of live fish.

Billfish are the stars of Costa Rica’s sportfishing industry. They are among the fastest in the ocean, and form an important component at the high end of the marine food chain. However, according to FECOP, “billfish are highly exploited in the eastern Pacific Ocean due to high-impact commercial fishing.”

The captain spies a good spot to start fishing and slows the motors. The mates pull frozen fish out of a cooler and attach them to colorful, squid-looking lures. It’s a frenzy of movement on the back deck as the mates get all the lines baited and positioned. Then we troll.

There is a definite air of exploration when one is out in the middle of the ocean. All around us is water, drifting into the horizon, 360 degrees. We’re fishing for sailfish, not tuna, so I don’t have the instinct of a hunter looking for his next meal. Still, the thrill of the chase is very real, if abstract: I have no idea what lurks below the glimmering surface of the ocean.

Fortunately, the captain and mates do. Soon they slow, and the mates start to scream: “Fish! Fish on the line!”

A dance to exhaustion

I snap to attention, knowing that I’m up. I have to reel this one in.

The mates hand me a fishing pole that’s bent nearly to the deck. I start to reel.

And so begins the back-and-forth dance of angler and fish. I crank, meet too much resistance, and let the line run. The captain maneuvers. The mates are running around me, shouting instructions, but I’m too focused on the task at hand to pay attention to anything else. Instinct has kicked in.

I scan the water’s surface looking for where the line leads. A couple of hundred yards out a sailfish jumps skyward. That was my answer.

Captain McGuiness backs the ship up and I reel like mad. We perform these steps several times, the fish and I in a battle to see who fatigues first. The longer I crank, the more I fear that I’m going to lose this battle.

I persist, and eventually we “land” the fish. I use quotation marks because with Costa Rica’s new sportfishing protocol, one never removes billfish from the water. Gone are the days of snapping a photo on the deck with a massive sailfish in one’s arms.

We never take the fish out of the water. After the battle, the fish is exhausted, so the crew oxygenates it by performing short movements from left to right for around 60 seconds as the boat moves forward. They remove the hook. Then they let go, and the fish returns to the depths of the sea.

But I caught it. Really.