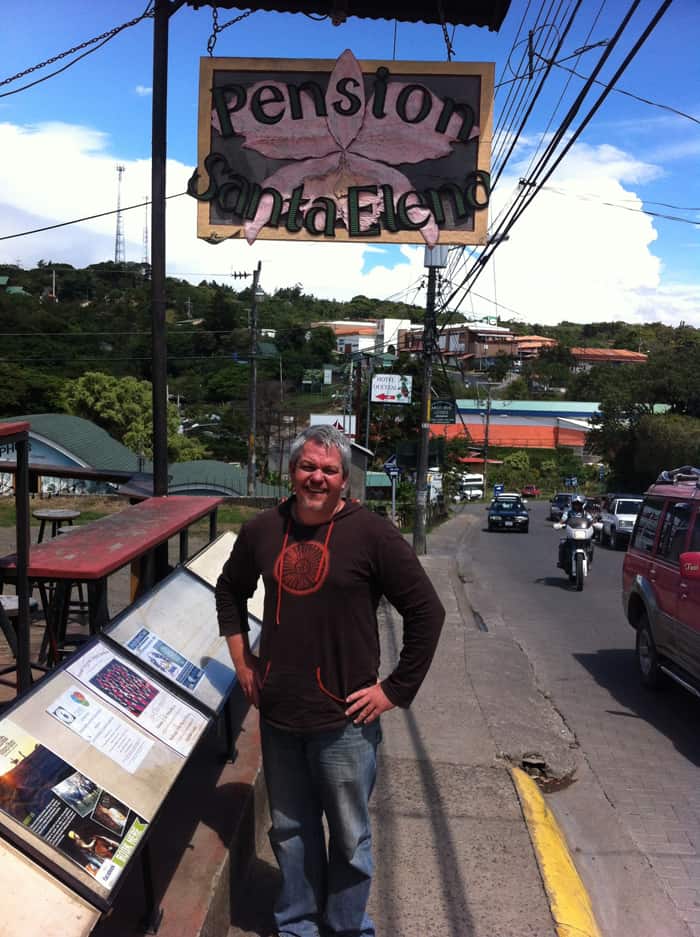 SANTA ELENA, Puntarenas — Ran Smith, 45, of Austin, Texas, has a full head of gray hair but seems way too young to have owned the Pensión Santa Elena for 11 years.

His hotel is ideally located in the heart of the triangular three-street downtown that is the main jumping-off point to the Monteverde cloud forest. It’s right next door to the super-popular Taco Taco, and in fact the hotel serves as the dining room for this hopping takeout counter — which, come to find out, is owned by Ran’s sister.

Travelers from all over the world walk into the hotel every day asking for a room, looking for an affordable place to crash. The staff quotes them affordable prices and shows them the rooms, and the walk-ins virtually never walk out.

So how did a 34-year-old Texan figure out how to buy a hotel in a world-class hot spot in Costa Rica 11 years ago?

And does he have any advice for anyone who would consider doing the same today?

Q: How did you end up owning a hotel in Monteverde?

A: I wanted to be in the hospitality business. I was originally in the coffee business. … I ended up traveling around looking at a lot of different places, not only in Costa Rica, but I settled on Costa Rica, I fell in love with it.

It’s easy to do business here, unlike the rest of Central America. I would look at it now in a different way. I would probably do business in Nicaragua, I think it’s an up-and-comer. But at the time, Costa Rica was definitely the safest of the countries in Central America.

Q: Can I ask what this place cost?

Q: Is this new? (Pointing to a two-story wing of hotel rooms.)

Q: How many rooms do you have here?

Q: And you were charging what kind of money for a dorm bed?

This was in response to a client that was changing, getting older, traveling with a girlfriend or boyfriend, want a private bathroom, looking for a good value but still looking for clean and fun and easy. So that’s why we built this, in response to that.

This was during the economic crisis, which couldn’t have been better timing. 2008 and ’09. We were lucky in Costa Rica still because we had the “other.”

So that “other” stayed one extra year. So we got one extra season out of the economic meltdown, and then after that it was just horrid. So for me, ’09 and ’10 were the worst two years. And it was bad.

Q: What nationality comes here most?

A: U.S., Canadian is our largest visitor, and then after that, for me the key is if we see a low count in Spanish travelers (from Spain), that means Europe is not going to travel much, and that’s going to be a bad year….

We still haven’t fully recovered. But we’ve had a whole lot more Spaniards this year and the year before. It’s getting better and better.

Q: So what was the biggest mistake you made? What regrets do you have?

A: It’s not a mistake, but … when I came here I played by the rules. And what does that mean? That means that for every guest that stays here, at the time it was 16 percent, now we don’t have ICT tax, so it’s 13 percent. But when I first took over, it was 16 percent sales tax.

They have 46% on top of the salary that is for social services, whether that be health care, pension, Caja, plus aguinaldo, plus two weeks’ vacation.

I think a lot of the people who come here to Costa Rica listen to people that don’t pay that, and so they have an idea in their mind that labor’s cheap. Well, it’s not cheap. Labor is not cheap.

If you own a corporation, which is typically how people buy things here, then you also have corporate tax. You have income tax on top of that. If you borrow money here, which we have, it’s even more important that you keep good records.

So I think that I didn’t make a mistake by doing it right. I think a lot of people make mistakes, and as a competitor, when I look at my competitors who don’t do it right, that means I’m 13 to 16 to 18 to 20 percent above market because I can’t lower my prices.

Q: How many employees do you have?

A: I have 20 people who work here, and they’re family, and it’s been a wonderful experience for the most part.

Q: You’ve got a good staff.

Q: So this “expat dream,” like I call it, move to the tropics and buy a hotel, what would be your advice for somebody considering doing that?

A: I guess I’ve met so many foreigners who come here to buy a hotel, thinking that it is retirement and discovering that it’s a whole lot of work.

And if there’s one thing that I have seen more often than not, it’s within 10 to 15 years there’s a lot of burnout, alcoholism — it’s hard work, and it’s not retirement.

Unless you’ve got like four, five rooms and all you’re doing is like a B&B. But if you’re actually doing a hotel, especially now, more than ever, the game has changed.

Q: How do you promote your business?

A: I’m going through that change right now myself. I was fortunate to enjoy basically 10 years of “Authors’ Choice” in “Lonely Planet.”

So I’ve had a reputation that has almost 100 percent to do with word of mouth, and with good quality customer service.

And now for the first time I’m starting to see that those booking engines, and reaching out to a client that is more apt to make a reservation online, more apt to use their phone or their tablet to make a reservation, I’m going to have to acknowledge that that’s where things are headed. So I’m starting again to look at making partnerships with Hotels.com or some other Internet booking agent. … You have this other beast out here that people use now to book rooms, and that’s 15 percent per booking.

Q: They get a 15 percent commission?

A: On my lowest published rate. So now it’s 28 percent coming off my room if I’m paying taxes.

So there’s two possible outcomes of that: One is that everybody raises their rates, we start seeing some rate integrity in the community, which would be great, because we certainly have not seen that ever since I’ve been here.

So there’s never been any real rate integrity. They’ll sell whatever they can to get a person in the room. That comes a lot from the model of gaining so much — most of their income is coming from travel agencies, from selling tours. So everybody pays a commission. All those tours give anywhere from 20 to 30 percent.

Q: Really? If I book my bungee with you, you get how much?

A: I think Extremo is 30. It’s crazy. I’d rather sell you a room, I’d rather give you great service, I’d rather tell you that bungee is good, or if it’s not for you, there’s something else that’s better for you. I’d rather be in the hospitality business and earn my money off of selling you this bed than selling you a tour.

And that’s where things start to get a little crazy in all of Monteverde and all of Costa Rica, is I can sell you a room for 7, 8 dollars because I’m going to sell you the highest-commission tour….

Ten years ago, if you came here as an expat, and you wanted to buy a hotel, get yourself a corporation and it’s done. And there was enough tourism that you’re going to be able to make it.

(If you buy here now,) you’d better be ready. You’ve got a lot of competition. A lot. And they got to eat. They’re not here to entertain you, or to make it comfortable for you, you know, they’re here to work.

Q: I’ve heard that people come here and they think, Ah, I’ll buy a hotel, a bed and breakfast, and then within five years — I’m sick of this place, I’m tired of the roads, I’m tired of the red tape, Costa Rica is too expensive, I want out.

A: Yeah. I would agree with that 100 percent. I believe, somehow or another, especially in the U.S., not so much in Canada, but definitely in the U.S. they have this impression that Costa Rica is like home, an extension of the United States. And I guess it’s because there’s so much English spoken, because it’s relatively laid-back and easy to do business here. But make no mistake about it, man, it is not home.

There’s cultural things here that if you’re not prepared for will drive you crazy, and it’s a very social state, the government leans very social, especially in labor laws. … And it’s all good things, it just means that it’s very bureaucratic.

But without a doubt, I’ve seen it so many times — they come and they think it’s going to be like home, and within a very short period of time, they find out that this isn’t home.

Q: But you’re not hitting that wall — you’re staying.

Q: So what’s the secret of your success?

It just so happened that I picked a great place to do it in. Up-and-comer, you know, in 2000, it was starting to rock and roll. It was getting a ton of press everywhere you went, from National Geographic to New York Times to all the major newspapers, to the Internet, so suddenly Costa Rica was everywhere.

A: Trying to think what my biggest mistake was. I cannot stress it enough that you must, must find a good lawyer. If you don’t have one, you’re going to get screwed.

So there’s no oversight. The only thing you have is a good, solid lawyer. Find one that speaks your language, that’s super-important, and find one that’s reputable. You got that, everything’s good, because they will fix whatever is going on, they will protect you from the beginning to the end.

Q: I was told that practically every hotel in Manuel Antonio is for sale.

A: Everything is for sale. There’s stuff in Sámara that’s been for sale since I’ve been here. Just relax, do your due diligence, buy right, take your time, there’s no rush.