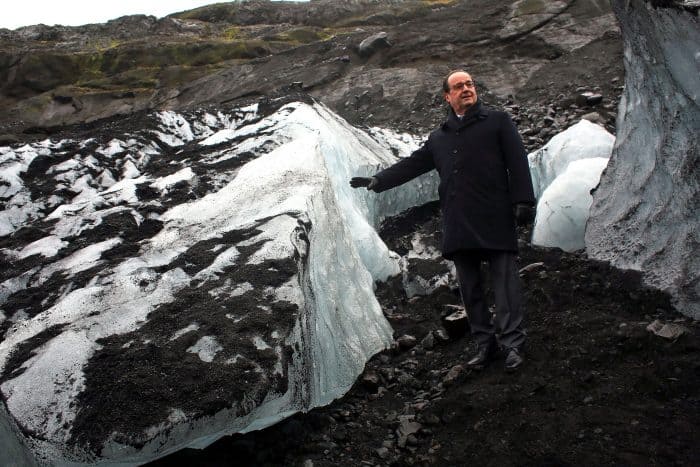 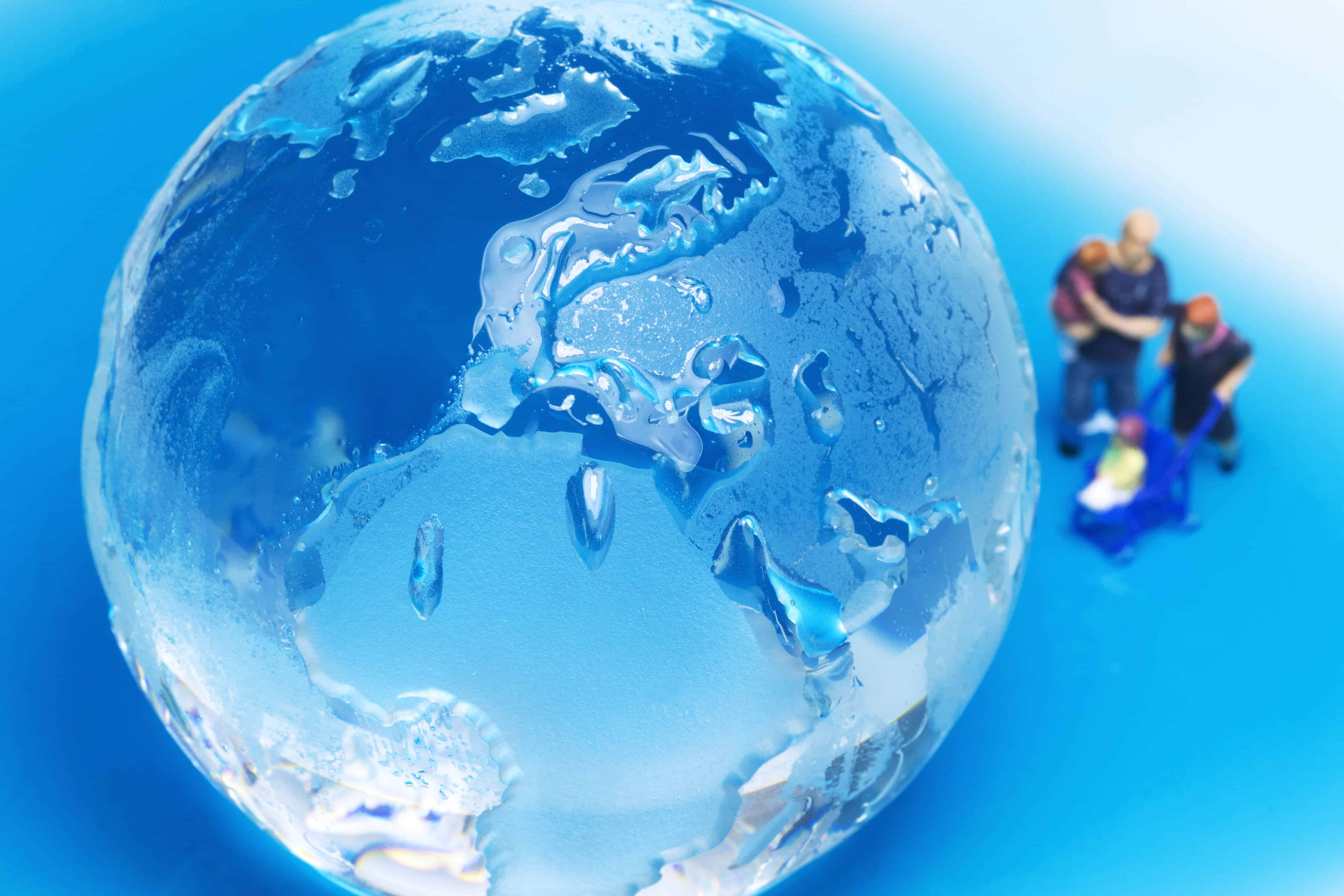 An illustration made in Paris on Nov. 8, 2015 shows figurines next to an Earth globe made of glass and covered in blue liquid. The Earth has heated up by 1 degree Celsius (1.6 F), Britain's weather office said in November. (Joel Saget/AFP)

PARIS – The proposed accord was just hours from a final vote when the glitch was spotted. Someone had changed a single word in the draft text — from a “should” to a “shall” — and suddenly the entire climate deal appeared at risk of faltering.

“We cannot do this,” Kerry warned.

Less than four hours later, the accord was approved with the bang of a gavel. A bit of diplomatic finesse had excised the troublesome word and helped clinch a historic agreement.

The formal adoption of the accord late Saturday was greeted with applause and cheers by thousands of weary delegates to the climate talks here. But the happy conclusion was preceded by days and weeks of tough bargaining, along with occasional flashes of drama.

Over the 13 days of the climate talks, and for months prior to it, negotiators faced the daunting task of forging consensus among government officials from nearly 200 countries — some of whom had been initially skeptical or even hostile to parts of the proposal.

U.S. and European officials prepared the ground for an agreement during months of heavy lobbying and deal-making in scattered capitals around the globe. But while the talks were far calmer than past climate negotiations, closing the deal was at times a diplomatic high-wire act, the success of which was never assured until the final moments.

“It took hard work, grit and guts,” said Jennifer Morgan, director of the climate program at the World Resources Institute.

Diplomats and observers who witnessed the proceedings from close range credited a handful of French, U.N. and U.S. officials who worked tirelessly over two weeks to keep the negotiations on track during the most difficult phases. With French prestige on the line, Fabius and Laurence Tubiana, France’s ambassador to the United Nations on climate change, kept a tight rein on the proceedings to prevent minor disputes from turning into revolts, which has happened famously in the past.

French officials insisted on continuing with the plans to hold the conference in Paris despite the terrorist attacks in the city two weeks earlier that killed 130. Even amid extraordinarily tight security, the hosts ensured that the thousands of delegates and journalists at the sprawling Le Bourget Exhibition Center saw few lines but plenty of catered French food and wine as talks dragged on.

Diplomats worked feverishly to ensure that many of the key struggles were resolved before the conference began. Obama administration officials pushed hard for the unusual “bottom-up” design of the draft climate accord, in which each country would submit its own, individualized plan for reducing or limiting emissions from fossil-fuel burning. The pledges would be non-binding, but for the first time, all countries, rich and poor, would be asked to make a contribution.

U.S. officials initially hoped that as many as 100 countries would submit pledges. By the second week of the talks, 186 capitals had done so.

Breakthrough with the world’s biggest polluters

A key breakthrough, diplomats said, was the U.S.-Chinese agreement in November 2014 to jointly announce ambitious pledges to reduce their countries’ emissions, setting an example for others as the world’s two largest economies and biggest emitters. Kerry traveled to India as well to enlist Prime Minister Narendra Modi’s support.

“The U.S. leaned hard on China and India to step up, while standing firm on its bottom lines,” said Elliot Diringer, a former Clinton administration environmental official and now executive vice president of the Center for Climate and Energy Solutions.

Kerry, a seasoned hand at climate diplomacy, flew to Paris during the second week of negotiations and remained there for the final five days, using his personal stature and longtime relationships with dozens of ministers at the talks to help keep wavering delegations in line.

“Kerry had plenty of other crises to deal with, but his presence at the talks was important,” said Durwood Zaelke, an expert in international environmental law and an observer to the negotiations. “And still, it was a real slog to get to where we got.”

The hard bargaining began midway through the second week. After an all-night session Wednesday appeared to make progress, the French on Thursday night convened an “Indaba of Solutions,” borrowing the South African term for large conference of leaders, in this case senior government ministers. But the session failed to make significant gains.

The U.S. team, led by Kerry and chief climate negotiator Todd Stern, struggled to fend off demands from small island states and other poorer countries for guaranteed “loss and damage” compensation, essentially payment for negative impacts of climate change. But the Obama administration would not contemplate such an open-ended financial obligation that Congress would have to approve and U.S. citizens would have to pay for.

Kerry sought to assuage the island states’ concerns by announcing a doubling of U.S. grants, to roughly $800 million a year, to help poorer countries harden their infrastructure again the effects of rising sea levels. The U.S. delegation also agreed to an aspirational goal of keeping future temperature increases below 1.5 degrees Celsius (1.8 degrees Fahrenheit), a far tougher challenge than the original target of 2 degrees C (3.6 degrees F).

By Friday afternoon, India and China expressed support for the latest draft text, as did Saudi Arabia, a country that has played a spoiler role in previous talks. Delegations began to push back against suggestions for further changes to the accord for fear that the agreement would unravel.

U.S. officials were sensing a growing optimism for an accord. At one point, when Stern walked into the main plenary hall with the representative of the Marshall Islands, delegates seated nearby broke into spontaneous applause. At a previous climate negotiation in Bali eight years earlier, the lead U.S. negotiator had been literally booed off the floor.

Paul Bledsoe, a former Clinton White House climate adviser, said the difference was less about American popularity and more about a trust that was built over many months.

“Unlike (earlier) Kyoto or Copenhagen talks, the Paris agreement is built to last,” Bledsoe said, “because it includes detailed emissions pledges by all major nations and clear rules to monitor those emissions.”

Deal nearly off over financial obligations

Yet, early Saturday afternoon, as U.S. officials huddled to pore over what they believed was the final draft, they discovered the tiny revision that threatened to derail the negotiations in the talks’ waning hours. The substitution of “shall” for “should” in a section that spelled out financial obligations was a potential deal-breaker. Had someone slipped in the language in an attempt to sabotage the deal?

“We made it crystal-clear that every text up until this particular one had a different wording,” Kerry said late Saturday of the incident. His message to Fabius: “Either it changes, or President Obama and the United States will not be able to support this agreement,” he said.

More hours passed as the Kerry team tried to investigate how the wording had been changed and whether they could fix the text without a risky reopening of the proposal for further debate.

After the call to Fabius, U.S. and French officials decided together that the word change had been accidental. As such, it could be handled as an ordinary typographical error and erased at the discretion of the conference leader.

Just after 6 p.m. Saturday, the full assembly was convened to give a final okay to the climate deal. A list of technical corrections was read and approved without debate.

Ninety minutes later, the Paris climate agreement, now whole, was declared adopted. But after the applause died down, Fabius took up the microphone to acknowledge yet another omission: He had neglected to sound the gavel to symbolically mark the pact’s approval.

Fabius picked up a small wooden mallet and gave the podium a resounding whack. The hall erupted in cheers.

Now, it was truly official.