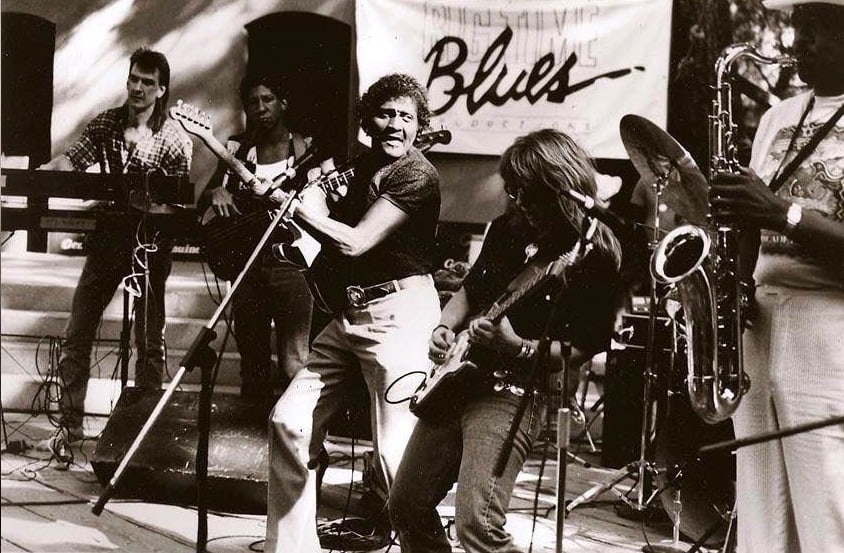 Singer, songwriter and guitarist Debbie Davies ranks among the top blues artists in the United States. Her career started in the early 1980s; she received the W.C. Handy Award for Best Contemporary Artist in 1997, and the 2010 Blues Music Award as Best Traditional Female Artist.

Davies just released her latest album, “Love Spin,” and is now touring to promote it. Costa Rica is on the tour list, and she will be playing Saturday at El Sótano in San José along with Costa Rica’s own JR Blues Band. The Tico Times caught up with her before her visit to discuss the new album and the tour experience thus far. Excerpts:

TT: What steered you towards blues, and what has kept you in that world?

DD: I always took to anything bluesy that I heard as a kid, but didn’t really know about the blues. My dad had a great collection of Ray Charles records that I always loved. Then it was the British Blues invasion, in particular, John Mayall’s Blues Breakers, that drew me to electric blues guitar.

Music is my life. Playing blues is what I do, and I just keep loving it and writing, recording and touring.

How does it feel when you are onstage showing your music to all your fans?

Onstage I try to get to that place where the audience and I become one.  Blues is the music of the human spirit, and it’s all about connection.

Tell us about your latest album.

“Love Spin” is all about getting your attitude right and turning a negative into a positive.  When I record a new CD, it always reflects where I am at in any particular point in my life while writing, and the experiences and feelings that are happening for me.

I had the pleasure of being able to get some very special guests on the album with me. Terry Hanck joins me on two tunes with his sax, and we do a duet on a tune called “Let the Heartaches Begin.” Terry toured for years with the Elvin Bishop Band, and is a triple threat as an artist who writes great songs, has one of the best voices in the biz, and is peerless on his instrument.

My longtime friend, Dana Robbins, who currently tours with Delbert McClinton, adds her superb sax playing on two other tunes on the CD: “It’s All Blues”, and “I’m not Cheatin’ Yet.” Dana and I toured with John Mayall in the early ’80’s and have been close ever since. She’s really a rare and beautiful talent.

A new artist on the scene, Jay Stollman, joins me in another R&B duet, “Don’t Change It Up.”  He’s got one of those rare, soulful, gravelly voices that just tears your heart out! I had the honor of producing Jay’s first CD which was just released in the States. We are currently touring and doing a lot of shows together. I am so grateful that “Love Spin” is getting really great reviews and airtime here in the U.S.

Is the album completely written by you, or did you collaborate with other musicians?

“Love Spin” is an all-original album, with two outside contributions by other great blues artists who are my friends. Lenny McDaniel, who wrote “Talk Real Slow,” just passed away in his home in New Orleans, so we dedicate this song to him every night.  The rest of the music is written by me and by my drummer, Don Castagno, who is a well-established songwriter here in the States. We have been working together for almost twenty years, writing sometimes together, and sometimes separately. For “Love Spin” we each had written our own tunes so there was no co-writing on this record.

I wrote “Life of the Party” in the funky style of blues that I have always loved, and that I had the pleasure of playing a lot when I was out on the road with Albert Collins.

How is the tour going? How have fans reacted to the new album?

We are on tour right now in the U.S., in California, and it is going great! I grew up in the West so it is so good to be back. We have a lot of fans out here!

Have you ever been to Costa Rica? How do you feel about coming to the country?

No, I have never been to Costa Rica and I am really looking forward to it. I feel like getting to travel and visit many countries is one of the blessings of being a musician. Since I grew up in California, I have always known some Spanish, and I hope I can improve it a bit while I am there.

What’s your message for all your fans in Costa Rica waiting for you to come?

I would like to thank all of the fans for coming out to support the blues. I hope you love the music. Have a great time at the shows!