Costa Rica recalls its ambassador to Venezuela after pro-Maduro statements 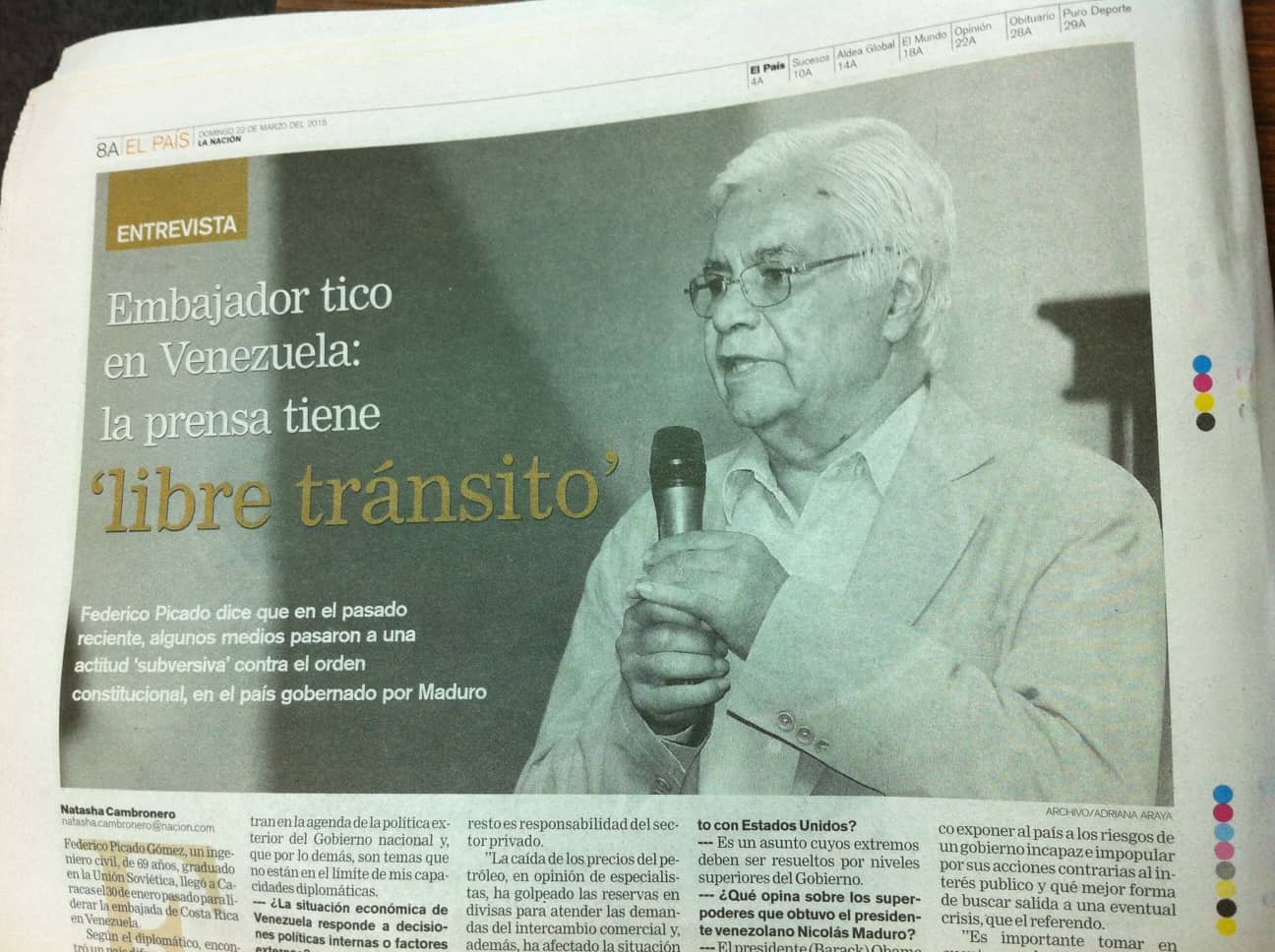 An interview with Federico Picado Gómez, Costa Rican ambassador to Venezuela, published in La Nación on March 22, 2015. Picado was ordered removed from his post on March 25. (Jill Replogle/The Tico Times)

When representing the Switzerland of Central America in the midst of a major diplomatic battle between powers to the north and south of you, it may be best to keep your mouth shut.

Costa Rica’s Foreign Minister Manuel González announced Wednesday afternoon that he was dismissing the country’s ambassador to Venezuela, Federico Picado Gómez. Picado found himself in hot water this week after voicing support for the Venezuelan government in an interview published in the daily La Nación.

González said Picado violated protocol by not asking permission from the Foreign Ministry to do the interview. Still, the minister said in a statement that Picado “is an excellent professional and political analyst with wide knowledge of international affairs and recognized personal virtues.”

Picado’s trouble began Sunday when La Nación published his emailed responses to questions from one of its reporters. Picado wrote that he observed a free press in Venezuela, and he blamed the country’s high inflation and shortage of basic goods on plunging petroleum prices and political maneuvers by “big business” looking to destabilize the Venezuelan government.

The diplomat also said he thought Venezuelan President Nicolás Maduro was right to ask for, and receive, extraordinary powers to bypass the country’s legislature in order to respond to U.S. President Barack Obama’s declaration of a “national emergency” to deal with the “threat” of Venezuela.

In the wake of the interview, reporters questioned Costa Rican President Luis Guillermo Solís about the appropriateness of Picado’s statements. They also questioned Solis’ appointment of Ambassador Picado, who studied in the former Soviet Union and has previously written admiringly of the vast socialist makeover initiated in Venezuela by former President Hugo Chávez.

Solís mostly defended his ambassador during his weekly press conference on Tuesday.

“One doesn’t have to be neutral to be an ambassador,” Solís told reporters. He said ambassadors should be chosen based on their diplomatic talents, not their political ideology.

“In the case of Venezuela, the only spokesman authorized to give statements about the issue is the foreign minister,” Solís said. “We’re centralizing all statements there precisely because the current situation is so delicate.”

On Monday, the Foreign Ministry reaffirmed Minister González’s position regarding Venezuela, which he voiced last week at a meeting of the Organization of American States in Washington, D.C.

“The situation in Venezuela requires us to stay alert to the evolution of events and to clearly signal the importance, in a full democracy, of exercising the democratic balance of power and generating appropriate conditions so that the opposition can carry out its actions within the framework of legality and respect.”

Tensions have escalated between the U.S. and Venezuela over the past month, forcing nations friendly with both countries, like Costa Rica, to walk a fine diplomatic line.

In late February, Venezuelan President Maduro announced mandatory visas for all U.S. citizens as a way to “control” U.S. interference. Soon afterward, Maduro ordered the U.S. Embassy to reduce its staff from 100 to 17 officials.

The following week, on March 9, Obama ordered the freezing of U.S. properties and bank accounts of seven Venezuelan officials — most of them accused of participating in the 2014 crackdown on opposition protests in which more than 40 people died.

In the wake of the new sanctions announced by the U.S., some Latin American countries backed Venezuela and indicated that the U.S. is inappropriately interfering in the country’s affairs. But Costa Rica has thus far remained more neutral.

The order recalling Ambassador Picado is effective April 1. Picado arrived at his post in January.