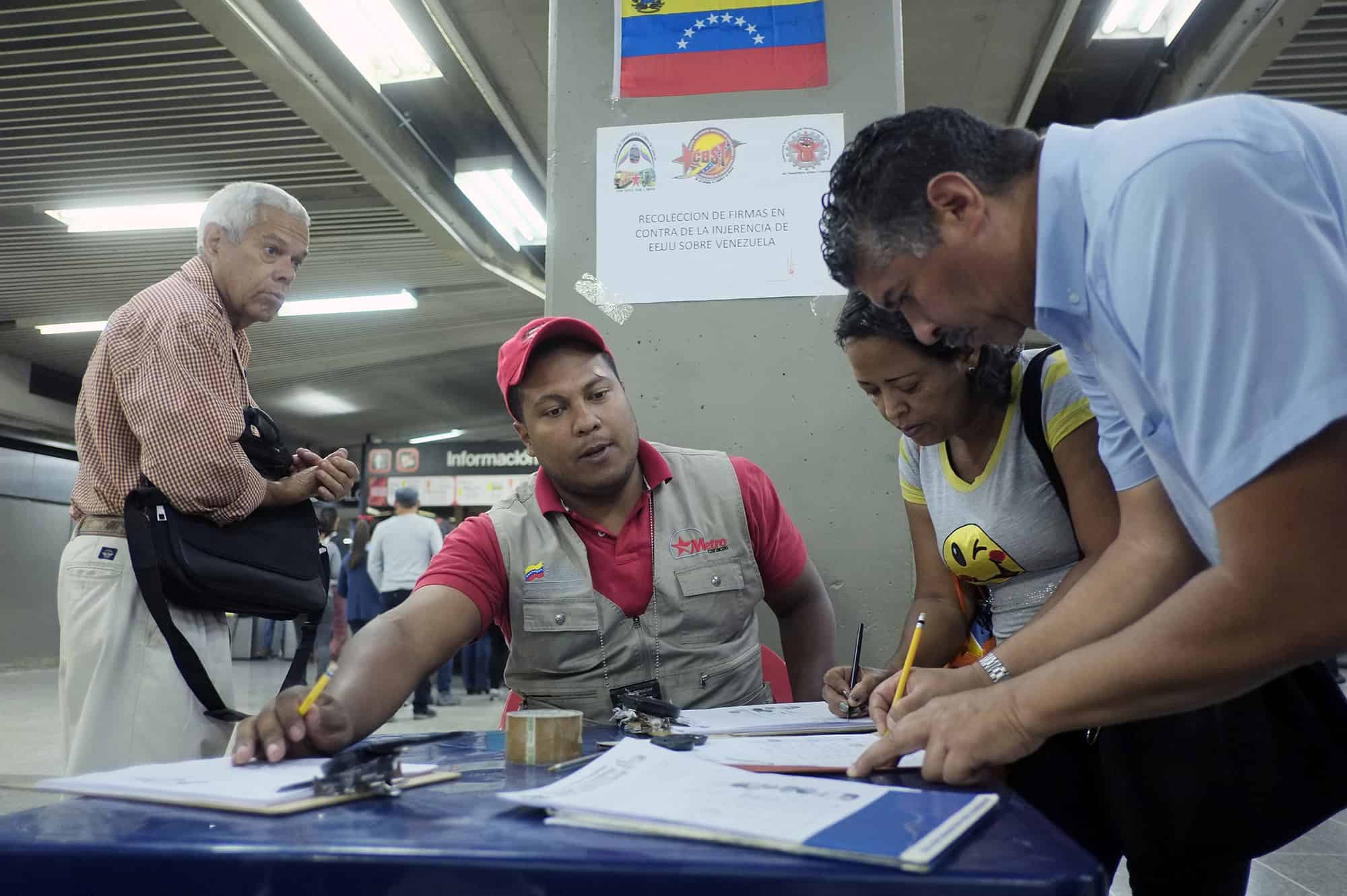 People sign documents in Caracas to show their support for the Venezuelan government after the U.S. imposed sanctions on Venezuelan officials, March 9, 2015. (Juan Barreto/AFP)

Obama ordered the freezing of U.S. properties and bank accounts of seven officials, including the director general of the intelligence service and the director of the national police.

“We are deeply concerned by the Venezuelan government’s efforts to escalate intimidation of its political opponents,” the White House said in unveiling the executive order.

The measures implement and extend sanctions adopted by the U.S. Congress last year that the president himself enacted in December.

But a senior U.S. official stressed that the sanctions would have “no direct effect” on the Venezuelan oil sector, of which the U.S. is the biggest consumer.

“In terms of the impact it may have on the energy sector or the oil industry, there is no direct effect from these sanctions,” the Treasury Department official said, speaking on condition of anonymity.

“There is no additional impact or additional sanctions on any industry, individual or entity that is not not specifically named in the executive order, or that is not named by the Department of Treasury in the future.”

The move is certain to worsen already fraught U.S.-Venezuela ties.

The two countries have lacked ambassadors in each other’s capitals since 2010, and are now locked in a bitter dispute over the size of their respective embassies.

Two years after the death of leftist firebrand Hugo Chávez, his hand-picked successor, President Nicolás Maduro has ramped up anti-U.S. rhetoric as the economy has worsened.

His government recently ordered the number of officials at the American embassy be reduced from 100 to 17 by March 17 and began requiring visas for U.S. travelers.

Patino, Ecuador’s top diplomat, backed Maduro after a meeting with his Brazilian and Colombian counterparts in Caracas with Venezuelan government officials and opposition leaders, in hopes of relaunching a dialogue that has been stalled since May.

“Insofar as President Nicolás Maduro is the president of all Venezuelans, elected in a democratic, transparent and clear manner, we will completely, head-on, with all our strength, oppose any attempt at destabilization,” Patino said.

Ecuador, one of Venezuela’s main regional allies, is led by President Rafael Correa, a leading leftist figure in Latin America.

Most of those targeted for U.S. sanctions were accused of being involved with a 2014 crackdown on opposition protests that left more than 40 dead.

The White House on Monday called the charges against Caracas Mayor Ledezma, an important opposition figure, as “based on implausible — and in some cases fabricated — information.”

A senior U.S. administration official described the measures as a “first round of actions under this executive order.”