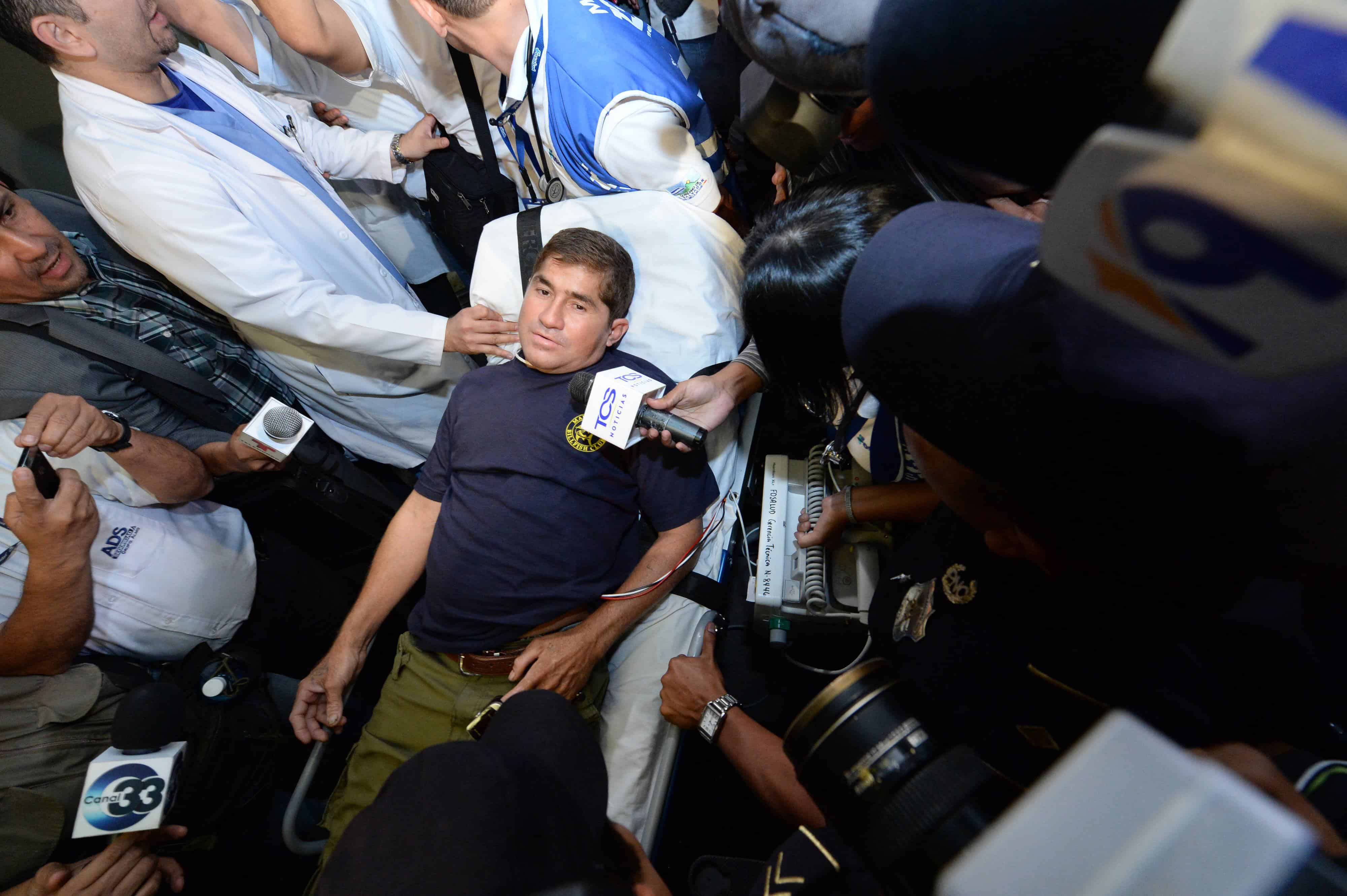 Salvadorean castaway José Salvador Alvarenga speaks to journalists in an ambulance on his way to San Rafael Hospital in Santa Tecla, El Salvador, on Feb. 11, 2014. The Salvadoran castaway who says he spent 13 months adrift in the Pacific arrived home Tuesday to the warm embrace of a family that thought him dead. (Marvin Recinos/AFP)

MAJURO, Marshall Islands – Fresh details have emerged of castaway José Salvador Alvarenga’s first encounter with other people after months at sea – including how Marshall Islands residents communicated with him in broken Spanish learned from popular children’s television show “Dora the Explorer.”

Until now, little has been known about the Salvadoran’s arrival on far-flung Ebon Atoll in the Marshall Islands, where he landed two weeks ago after setting sail from Mexico on a fishing trip in December 2012. Only a single telephone services the Pacific outpost.

But Ebon Mayor Ione de Brum revealed to AFP that Alvarenga “managed to swim his boat ashore” on the night of Jan. 29 after a 12,500-kilometer (8,000-mile) journey.

Exhausted, he fell asleep on a deserted beach to be awoken the next morning by roosters crowing.

Unknown to the 37-year-old, he had washed up at the tip of Ebon, the southern-most atoll in the Marshalls.

A U.S. study at the University of Hawaii of the prevailing wind and current conditions has supported his tale of survival, with a model tracing a remarkably narrow path across the Pacific to pass within 120 miles of Ebon.

“He was at the tip of the island where it’s uninhabited, but from that vantage point he would easily see the single house on the neighboring island across the pass,” said de Brum.

The two coconut-forested coral islands are just a stone’s throw away and “people can yell back and forth between these two,” she said.

Alvarenga did just that after the sunrise let him see where he was.

Amy Libokmeto and Russell Laijedrik, the only two residents on the tiny island of Eneaitok, said they heard shouting and spotted Alvarenga on the neighboring atoll’s beach.

They were likely the first humans he had seen for months. He left southern Mexico on what was supposed to be a one-day fishing expedition with a companion – who, after weeks adrift, died of starvation and was tossed overboard.

Alvarenga was frantically yelling in an incomprehensible language and waving his arms in the air while holding a knife, Libokmeto told AFP.

“As we approached him, I used broken English and motioned to the knife and told him, ‘put away, put away.'” A man reads a newspaper with the a picture of castaway José Salvador Alvarenga on the front page, in Santa Tecla, El Salvador on Feb. 12, 2014. Johan Ordóñez/AFP

With long hair, a bushy beard and dressed only in his shredded underwear, Alvarenga immediately dropped the weapon.

“He gave in to his weakened state and collapsed onto the beach,” Libokmeto said.

It was obvious to the couple that he must have washed ashore. The entire atoll has fewer than 700 residents, most of whom are related by blood or marriage to Libokmeto and Laijedrik.

They said they took him to their home, where Libokmeto prepared a bucket of fresh water so he could have his first proper wash in over a year, then gave him clothes to wear.

Unable to communicate verbally as he spoke Spanish and they did not, the couple gave Alvarenga some paper and a black marker while Libokmeto whipped up pancakes, which the hungry man devoured.

Laijedrik took his notes and crossed the reef to the main Ebon island, where he sent a young boy to get the local mayor de Brum and then retrieved Alvarenga’s boat.

De Brum quickly rounded up the island’s health assistant, her chief of police and Ola Fjeldstad, a visiting Norwegian student anthropologist and the only other foreigner on Ebon.

They grabbed some coconuts and bananas and rushed to meet the stranger, giving him a brief health check while checking his 24-foot boat, whose motor had long since died.

“In the boat was a live bird tethered by its leg, bird scraps, bones, feathers and a small turtle shell,” de Brum said.

The mayor discovered that her son had a few words of Spanish “learned from the ‘Dora the Explorer’ cartoon show his children used to watch”, and with the pictures Alvarenga drew a basic understanding of where he came from emerged.

Alvarenga said he survived on a diet of raw bird flesh, turtle blood, his own urine, rainwater and dreams of eating his favorite food – tortillas. The turtle shell was used as a cup to drink.

The castaway was starving, but it wasn’t just food he was hungry for.

“He was so hungry to give us information he kept talking fast but we couldn’t understand him,” said the mayor, adding that she initially refused to allow him to use the island’s phone.

“He wanted to contact his family but I was concerned because we were unsure of who he was, his motives or if he had other friends (on ships nearby) that he would alert – I just did not know and did not want to risk it,” she said.

Instead she contacted the police and ministry of foreign affairs in the Marshalls capital Majuro.

The Salvadoran remained on Ebon for five days until a government patrol boat took him to Majuro, from where he eventually left for El Salvador and an emotional family reunion.

He gifted his boat to Libokmeto and Laijedrik. It is now being used to carry cargo and passengers on Ebon.