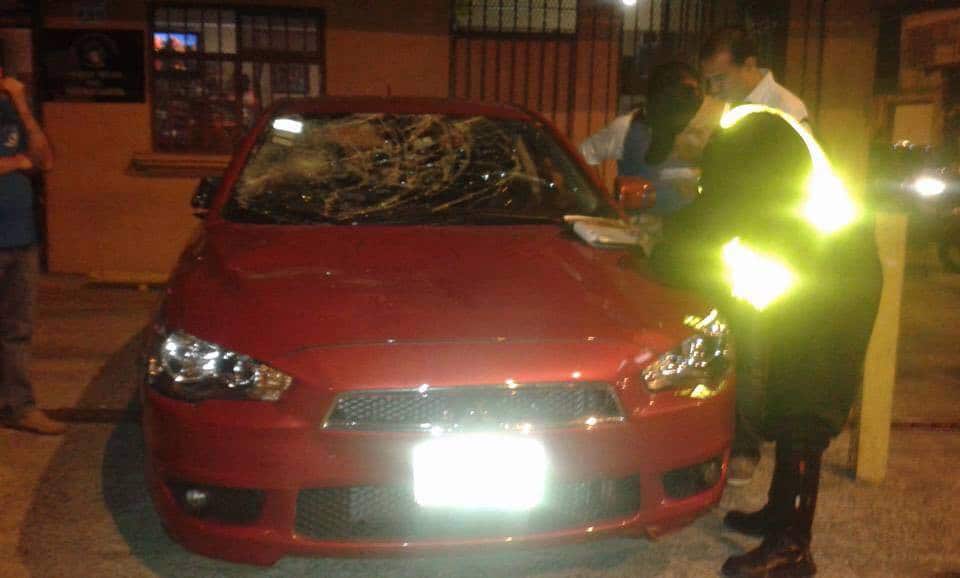 A photo of a Mitsubishi Lancer that was damaged by vandals on the evening of Aug. 21, 2015 in Costa Rica, reportedly because the driver was working with the ride-hailing service Uber. ((Courtesy El Infierno en Costa Rica Facebook))

Uber went live in Costa Rica Friday afternoon but within hours the Public Works and Transport Ministry (MOPT) announced that it had fined two of the ride-hailing service’s drivers, according to a Facebook post from the ministry. As MOPT denounced Uber, it released a statement repudiating any violence against the company’s drivers after photos of a car with smashed windows surfaced on social media in the pre-dawn hours Saturday, reportedly showing a vehicle that was damaged because it was working with Uber.

MOPT has called Uber an “illegal public transportation service,” a distinction the company refutes. According to a statement from the ministry, Vice Minister of Transport Sebastián Urbina said that Uber drivers caught by Transit Police would have their vehicles impounded and fined ₡103,544.10—an amount that apparently continues to change—and lose their license plates.

Rocío Paniagua, spokeswoman for Uber Costa Rica, told The Tico Times that the drivers whose vehicles were impounded have the “full legal and economic support” of the company. She said that Uber is not public transportation but a private club of members offering a transportation service.

Two vehicles were impounded by MOPT Friday but another might have been damaged by a group of vandals. Several sources on social media shared images of a red Mitsubishi Lancer identified as an Uber vehicle that was damaged in Tibás in the predawn hours of Saturday morning.

The photos show the front and back windshields smashed and several windows broken.

Paniagua said the case was under investigation and said she could not confirm that it was an Uber vehicle at the time she spoke with this newspaper.

“Violence is totally unacceptable to us and not the way to come to an agreement,” she said, “We continue to cooperate with the authorities and dialogue about how we operate.”

The Tico Times was not able to reach the Transit Police for comment Saturday. If it was an Uber vehicle, it was not listed among the two that were impounded.

The MOPT crackdown on Uber drivers followed another dispute, this one between the media and Urbina. The daily La Nación reported that Urbina asked licensed taxi drivers to report Uber drivers they saw on the roads and report them to the Transit Police.

Urbina tweeted a denial that he asked for assistance from taxis during a meeting he held with representatives Friday.

Yo no estoy haciendo llamado a los taxis rojos a que identifiquen a choferes de Uber.

Saturday, MOPT released a statement decrying “violence in any form against drivers using Uber’s service.” According to the statement, Urbina said:

I never incited anyone to violence, nor have I asked the taxi drivers of this country to take actions against drivers that use the Uber platform, nor that they report them to MOPT. I hope that the Prosecutor’s Office acts with all the force of the Law against those responsible for this vandalism that occurred this morning.

Despite the cold shoulder from the government, Uber reported a warm welcome from users. Paniagua said that 4,500 new users signed up with Uber Friday.

“We’re going to continue looking for opportunities to dialogue and clearly with the excellent welcome we’ve received from users and the media we want to continue growing our users and collaborators so every Tico can have an Uber within a five-minute drive,” she said.