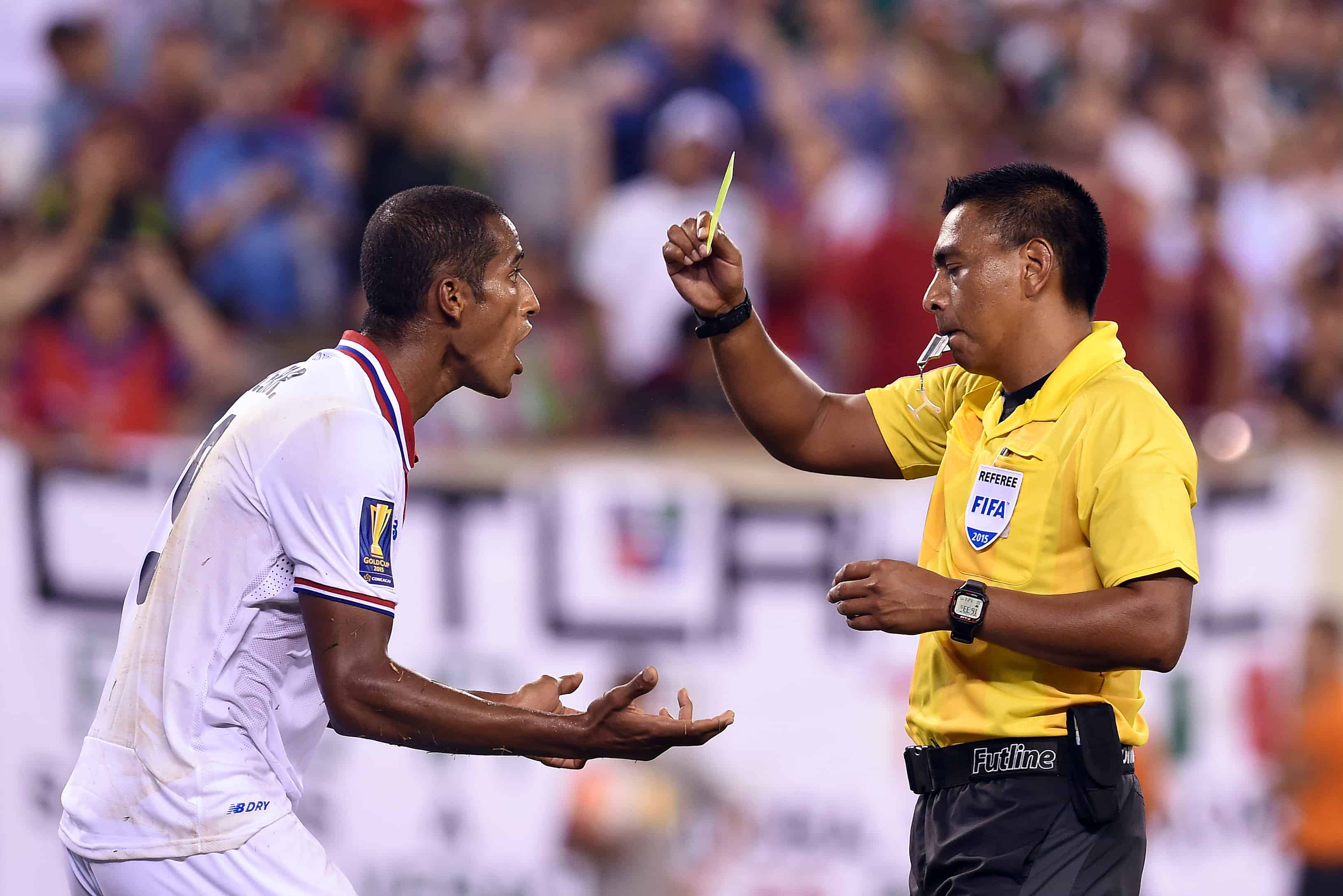 Costa Rica's defender Roy Miller (L) is given a yellow card by the referee during the CONCACAF Gold Cup quarterfinals soccer match against Mexico at the MetLife Stadium in East Rutherford, New Jersey, on July 19, 2015. (Jewel Samad/AFP)

Just seconds away from taking the game into a shootout, a stunning yellow card against Costa Rica brought about the one and only penalty kick needed to send the Ticos home from the Gold Cup. The controversial call landed on Roy Miller in the 122nd minute after Oribe Peralta landed awkwardly in the penalty box in Costa Rica’s 1-0 loss Sunday night at MetLife Stadium in New Jersey.

An Andrés Guardado penalty kick at the end of the second stoppage time gave Mexico the only goal of the quarterfinal matchup. For the Confederation of North, Central American and Caribbean Association Football (CONCACAF), the officiating again becomes the story for a federation marred with past referee controversies.

If CONCACAF wanted to lose its reputation as a punch line, that wasn't the way to do it.

Though he drew the game-defining foul, Peralta was fortunate to even be on the field. The 31-year-old tackled Elías Aguilar while blatantly swiping his right leg to cut the back of Aguilar’s legs. Officials gave Peralta a yellow card for a play that probably merited a red.

But for Costa Rica, the loss puts one more game on the Paulo Wanchope winless counter. Under the young coach, La Sele advances to 0-4-5 and has failed to answer its most consistent concerns, namely a defense that continues to suffer from breakdowns in communication.

But Costa Rica’s defense held on for the entire game, despite a string of close calls, especially in the second half where Carlos Vela had some great opportunities at goal. However, Mexico’s attack, minus injured stars Giovani dos Santos and Javier Hernández, couldn’t finish on nearly a dozen opportunities near goal.

La Sele had a multitude of chances to get on the scoreboard as well. A perfect cross from Joel Campbell in the 34th minute went for naught when Johan Venegas pushed the ball over the crossbar. Minutes later, Celso Borges missed high on a beautiful setup by Bryan Ruíz when Mexican defenders were caught off guard.

After allowing four goals in its last match against Trinidad and Tobago, Mexico’s defense looked much improved against Costa Rica. Besides the first half misses, the Ticos weren’t able to really threaten again until Joel Campbell broke through a maze of Mexican defenders and got a beautiful shot on goal that was saved by a diving Guillermo Ochoa.

In Costa Rica’s most meaningful game since the World Cup quarterfinals a year ago, the team exits the 2015 Gold Cup in a far more disappointing manner than when it departed proudly from Brazil after a grinding battle with the Netherlands. This time around, thanks to a questionable yellow card, Costa Rica fails to make the Gold Cup semifinal’s for the third straight time.