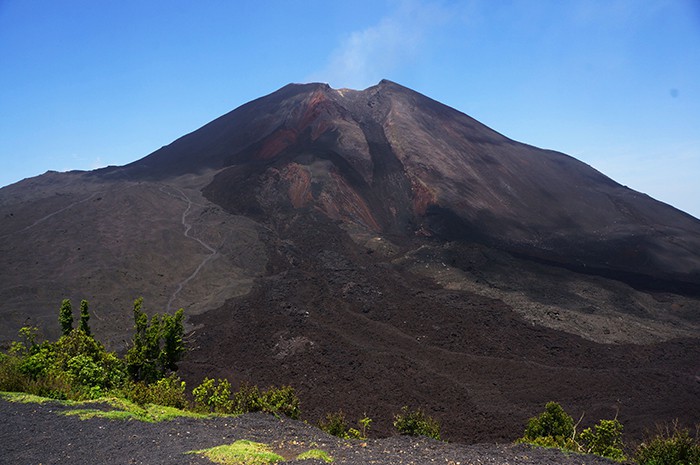 Pacaya is the most active volcano in Guatemala. (Lauren Salisbury/The Tico Times)

PACAYA VOLCANO, Guatemala — The crater of Pacaya Volcano emerges from the craggy landscape of what once was a sea of lava, now hardened into rippling waves of rocks. The deep brown, black and red sands of the crater gently collide with blue sky. There are no clouds on this bright, sunny day in Guatemala, but today Pacaya is showing signs of activity and white puffs of smoke dot the horizon.

The panorama before me stretches wide, with sharp and spongy volcanic rocks beneath my feet, rolling on as far as the eye can see. I am struck by the feeling that this must be the closest one can get on Earth to understanding how it felt for astronauts touching down on the moon. Or maybe how Frodo Baggins felt climbing to Mordor in The Lord of the Rings trilogy.

The scene is completely uninterrupted by signs of humanity, apart from a tiny red building painted with the words “Lava Store.”

Pacaya, named for a vegetable that grows on trees found in the surrounding lowlands, is part of a volcanic complex of 17 craters. Situated at 2,552 meters above sea level, it isn’t the tallest volcanic crater in Guatemala, but it is the most active.

The crater was dormant for nearly a century, but after an eruption in 1965 it has erupted quite frequently in recent years. The largest and most destructive eruption occurred in 2010, covering nearby towns in lava and ash. It has erupted 23 times since the Spanish colonization of the Americas, making it more active than any of the other 33 volcanoes found in the country.

The crater of Pacaya is a 2.5-hour climb from the nearest town and visitor center in San Francisco de Sales. The ascent is steep, so steep that locals on horseback follow tour groups up just in case tourists decide the trek is too strenuous and they would prefer to ride the rest of the way.

A highlight of the hike is a mirador that overlooks the lagoon of Calderas and offers a view of the Agua, Fuego and Acatenango volcanoes, as well as Guatemala City in the distance.

The trails leading up to the crater are green and vibrant. All the foliage here has grown back since the 2010 eruption destroyed nearly all vegetation in the national park. The amount of foliage here today is a testament to the quality of the soil and the fierce desire of life to return.

Near the base of the crater sits the Lava Store, a humble shop that sells jewelry and crafts made by local artisans.

On May 27, 2010, Pacaya had its largest eruption ever, destroying many homes in the villages below.

After this catastrophic eruption, two young men with Guatemalan roots were inspired to take action. David Flores, a California native of Guatemalan descent, and Fernando De Leon, born and raised in Guatemala but working in Los Angeles, had recently left their Southern Californian careers in the hospitality and entertainment industries in search of building a more meaningful life in Guatemala.

“We were in search of more purpose in our lives,” David says. “We wanted to find a way to give back to the world.”

When they learned of the destruction caused by the volcano, David and Fernando came up with the idea of founding Mayan Rebirth, a jewelry collection that benefits the local people near Pacaya. The jewelry line crafts Mayan symbols using lava ash and coconut shells.

“We decided to turn this devastating act of nature into a constructive circumstance,” the founders wrote on their website. “We needed to find a way to generate resources to further assist the families who lost their homes. This is how our idea came into fruition.”

As David tells me the story of the eruption and the Lava Shop, a necklace featuring a volcanic symbol catches my eye, speaking to me as few souvenirs have. I decide to purchase it.

“Look at this piece and remember that with everything inside yourself you can do something about the things that threaten to destroy you and turn it into something positive,” David tells me.

The message shared by the Lava Shop atop Pacaya Volcano rings true, and I know the necklace will serve as a reminder for me in years to come. As humans we may not have the force of a volcano, but we do have the power to turn negative circumstances into something beautiful, like the soft gray of a volcano etched onto a coconut shell necklace.

To support the work of Mayan Rebirth online, visit http://mayanrebirth.com.