How not to visit Irazú: A cautionary tale 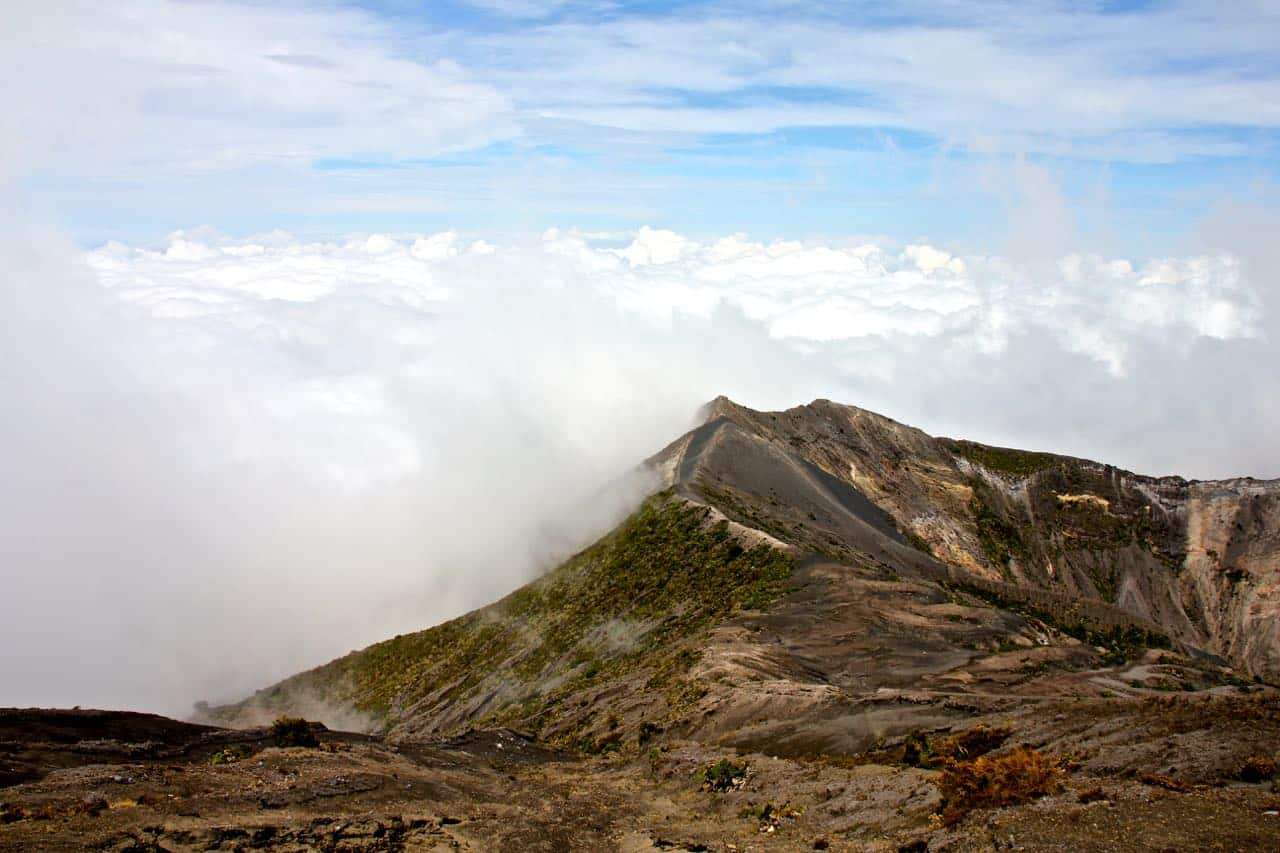 When I first arrived in Costa Rica, now more than a year ago, I wanted to see everything. I had this desire to throw myself in a dozen directions at once. I wanted to leave no stones unturned, and I didn’t want to waste a second overturning them.

One Sunday afternoon, I decided to take a spontaneous trip. I was high on instant coffee, I had just started renting my first apartment in Costa Rica, and the idea of staring into the depths of an active volcano excited me. I could hop a bus at the Plaza de la Cultura at 8 a.m. the next morning, ride to the summit, hike around the rim, and be back home by 3 p.m. Perfect.

The trip isn’t even that expensive. Compared to a tour company, $9 round-trip was a steal. The $10 park fee supported a good cause. (The fee has since risen to $15 per person.) According to scattered websites, there were even some snack shops at the trailhead, no picnic preparations required.

Yet what followed was a cavalcade of misfortunes, starting the night before and continuing until long after I returned. Here, in short, is how not to visit Irazú.

I’m fairly athletic these days, but after a recent visit to Puntarenas Beach, I returned with a sunburn that could only be described as “medically worrying.” I had slathered myself in sunscreen, before and after my dips in the water, but the sun had still managed to sear my torso like a fillet of mahi.

The night before my ascent, I cooked up some pasta for my wife and fried rice for myself. We enjoyed a couple of mugs of guaro-and-guava juice, and we stayed up late watching a BBC drama, “The Hour,” which strung us along until 12:30 a.m.

What does it matter? I thought. It’s not like I’m climbing Irazú. It’s just a bus trip. Whatever.

I should have known not to drink liquor the night before, but I figured knocking back a few liters of water would do the trick. My runner’s backpack is too small to carry a serious Nalgene, so I purchased a small bottle of water from a pulpería in town, remembering those snack shops on the mountain. Once at the top, I could buy all the water I wanted.

But there was a hitch: From the moment I woke up, I felt a niggling nausea. I couldn’t understand why; I had felt so good the night before. Even my dreams were easygoing. Yet my stomach felt distended and dense, as if refusing to digest. I diagnosed the feeling as a lack of sleep (only five-and-a-half hours) and resolved to nap on the bus. No problem.

The bus arrived on Second Avenue only 15 minutes late, and I realized that the long line of commuters was not headed to Irazú. I paid my fare, found a seat, and soon the bus lurched forward, carrying only me and a guy going to Cartago. It was, in essence, a private ride.

As the bus meandered around mountain switchbacks, my stomach continued to burble. We passed through small towns and light woods, between cliffs and over potholes, and my stomach objected to every wobble and thud. I did not grow up in a Dramamine family; I have decent sea legs and actually enjoy turbulence. This feeling did not compute. As I spread out across two seats, I stretched my belly to ease its queasiness, aggravating my sunburn as I did so. This posture worked for a while, but I couldn’t enjoy the broadening vistas of the Central Valley. Every time I glanced through the window, seeing the cream-colored sprawl of Cartago recede in the distance, I felt a stab of wooziness.

At the park entrance, I inhaled a draught of fresh alpine air and paid my entrance fee.

“I’ve been really looking forward to seeing the volcano,” I told the park ranger in prim Spanish.

He grinned, amused, as if to say: Yeah, well, I’m here every day.

When we arrived at the parking lot, I debarked feeling good. I had followed the websites’ advice and worn a decent jacket and durable shoes. I even knew to arrive early, because the views are clearest in the morning. From the parking lot, the site is a vast bowl of rock strata and ash fields. A trail circumscribes the blackened flats, and clouds drift over carpets of vegetation. Hikers dotted the trail, but again, the place felt empty of human life, as if it had been intended only for me.

The Stores Are Closed

Now I felt annoyed: The Irazú parking lot had one kiosk (for snacks) and one sizeable general store. Both had been closed indefinitely. (Not to fear, though – they have since reopened.)

I asked a park ranger whether they would open later. “No,” he said. “They have been closed for some time.”

“Is there any water?” I asked. The signs in the public bathroom read, Not Potable.

“Not really,” said the ranger. He looked disheartened on my behalf. I thanked him and started to walk.

Meanwhile, I felt myself belching with every step. My guts gurgled in protest. I felt light-headed and clammy. But I had come all this way, and there was no way back, so I continued down the smooth concrete path.

Irazú isn’t the tallest peak in Costa Rica, but it’s still enormous: The volcano rises more than two miles above sea level, and if you’ve lived most of your adult life at 1,000 ft., the thin air can be dizzying. Costa Ricans fully appreciated the immensity of Irazú in 1963 when the cone started to erupt, gushing clouds of ash into the air, and continued to the darken the sky for three full years.

Having hiked high-elevation mountains before, I was very conscious of altitude sickness, and as I walked the edge of the ash fields, I started to resent the lack of water—the first resort for dealing with symptoms. I wished I had known about the stores’ closures, because I wouldn’t have felt so cavalier about my preparations.

But the view made up for it: Irazú is the 15th-tallest mountain in Central America, which is no small distinction, and it’s the highest active volcano in Costa Rica. From the trail, the mountain seems to split apart, and instead of land, all you can see is an ocean of clouds. Awash in sunlight, the bleached billows stretched endlessly below. This was something I had never seen before, in the dry Rockies or low Appalachians—a layer of clouds below me, like a landscape photograph turned upside-down. For full minutes, I forgot about my ailments and basked in the beauty of it all.

The cliffs of Irazú drop precipitously into a broad crater, and its size and texture is awe-inspiring. From my vantage point, I couldn’t see the lake at its core, famously tinted green. The lake grows and shrinks at different times of year, but I wondered how I could miss it in the middle of the rainy season. Little did I know, there was a second trail that climbed an even higher outcropping. Every snapshot I’d seen of the lake had been taken up there.

As I rounded my way back, crossing the vast black ash fields, I started to swallow bile. Much of the fields has been reclaimed by wild grasses, but the tract still seems empty and desolate, like a desert. I felt parched and sicker than ever.

When I spotted a tour group, I followed them into the middle of the basin. I was relieved to hear them speaking German, since my German is vastly better than my Spanish.

“Excuse me,” I said to a random couple. “Do you have a tour guide?”

“A guide? Yes, over there,” said a silver-haired woman.

The guide was petite and peppy, and after I described my condition and need for water, she advised me to return to the parking lot.

“Just look for our tour bus,” she said. “You can ask our driver for some water.”

“I really appreciate it,” I puffed with relief. “I thought the stores were going to be open.”

The guide smiled and shook her head, as if everybody knew the stores were closed, and said she could drive me down the mountain, if I wanted. I declined, not wanting to be a bother, and not knowing where they were headed next. One of the German hikers even offered her own bottle of water, still half-full, for good measure. No one has ever said, “Vielen Dank,” quite so adamantly as I did.

When I returned to the parking lot, I noticed a rain barrel by the side of the general store. I refilled the empty bottle and drank it down greedily. Still, my stomach roiled and spasmed. The Germans returned and asked how I was doing. I said I was feeling much better, thank you, which was partly true. Then they drove away in their minibus, honking and waving. I smiled crookedly, waved back, and then felt an operatic wave of nausea.

Waiting to Get Sick

How to describe what happened next?

Let’s put it this way: Imagine an old shower head. It’s rusty and wide, and its pipes jiggle in place. The water sprays broadly, and in violent bursts.

That is exactly the way I vomited into the bushes. Broad, violent bursts.

I had made every mistake: Not listening to my body, foregoing water, permitting physical exertion, even consuming alcohol the night before. But as I puked my breakfast, dessert and finally dinner into the underbrush, I realized that I should probably have manned up and stuck a finger down my throat the moment I arrived. Now the sickness felt inevitable, a logical finale to a series of bad signs. Whether you’re bussing or ice climbing, 11,000-plus feet is nothing to trifle with.

During my final rib-cracking session, I launched a wad of fried rice into the grass. I blinked, wiping mucus from my eyes, and identified the true culprit: shrimp fried rice from a can. I had never heard of canned rice, and I’d tried it as an experiment—an easy-to-make lunch or dinner for lazy days—but my digestive system had clearly rejected it. I had endured food poisoning before, and that was exactly what this felt like. I am not 100% certain that the can of dry grains and dubious-looking decapods were responsible for my vigorous upchucking, but call it an educated guess.

As I lay on a picnic bench, groggy and miserable, my only real regret was not hiking the second trail. A ranger told me that the view was spectacular, and on clear days you can see both the Pacific and Caribbean from the same vantage point. By the time I could sit up again without teetering, it was noon, and I didn’t have time to ascend the cliff and also catch the 12:30 bus back to San José.

I still felt woozy on the two-hour bus ride home, and by the time I reached my front gate, I was exhausted. My wife foraged for crackers and Gatorade, but the biological war continued to wage until 10 p.m., when my sheet-soaking fever finally broke, and I could hold down food again.

In retrospect, the food poisoning wasn’t really my fault, just a stroke of bad luck, and if you’re the kind of New Englander to muscle through discomfort, my choices didn’t seem all that unwise at the time. Take away the bad shrimp, and everything would have been fine.

But lesson learned: You don’t mess around with a volcano.