HomeCosta RicaPride and resignation in Costa Rica after being left out of the... 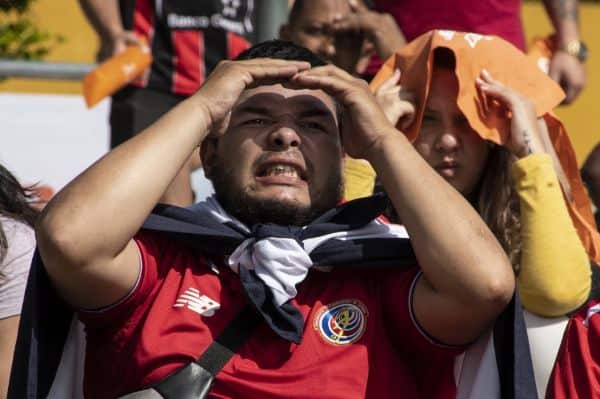 Disappointment, joy, enthusiasm, resignation and pride were the emotions that Costa Rica fans experienced on Thursday during the match against Germany, which the Ticos lost 4-2 and left them out of the World Cup Qatar-2022.

A carousel of emotions with their eyes on the giant screens in the squares of downtown San Jose in the midst of a comeback that ended frustrated by German goals in the last 15 minutes.

But with Kai Havertz’s first in the 73rd minute came the nerves and with the Chelsea striker’s second five minutes from the end, resignation, which was deepened by Germany’s fourth, scored by Niclas Fuellkrug a minute from time.

“It doesn’t hurt us much for the loss we had because we fought hard enough, as the Ticos say. Our saying is ‘we are always pure life’. We always go forward,” Denis Matapasos, a 64-year-old cab driver, told AFP.

Hopes of advancing to the round of 16 were high in the previous days after the Tico’s 1-0 victory over Japan following the debacle in the debut against Spain (7-0).

The four-time world champions needed a big win to qualify, but the 4-2 result left both Costa Rica and Germany out.

The result in the other Group E match, in which Japan beat Spain 2-1, eliminated both teams from the finals.

“From the Japan game onwards they went up. I think this last match was quite exciting, it was a real thriller. I am quite satisfied with this last game,” Paola Campos, 22, a student, told AFP.

The Costa Rican team finished last in the group with 3 points, Germany third with 4, the same as Spain, which qualified on goal difference along with Japan, first with 6 points.

Japan will face Croatia and Spain will face Morocco in the round of 16.