Taxi drivers to stage another demonstration against Uber 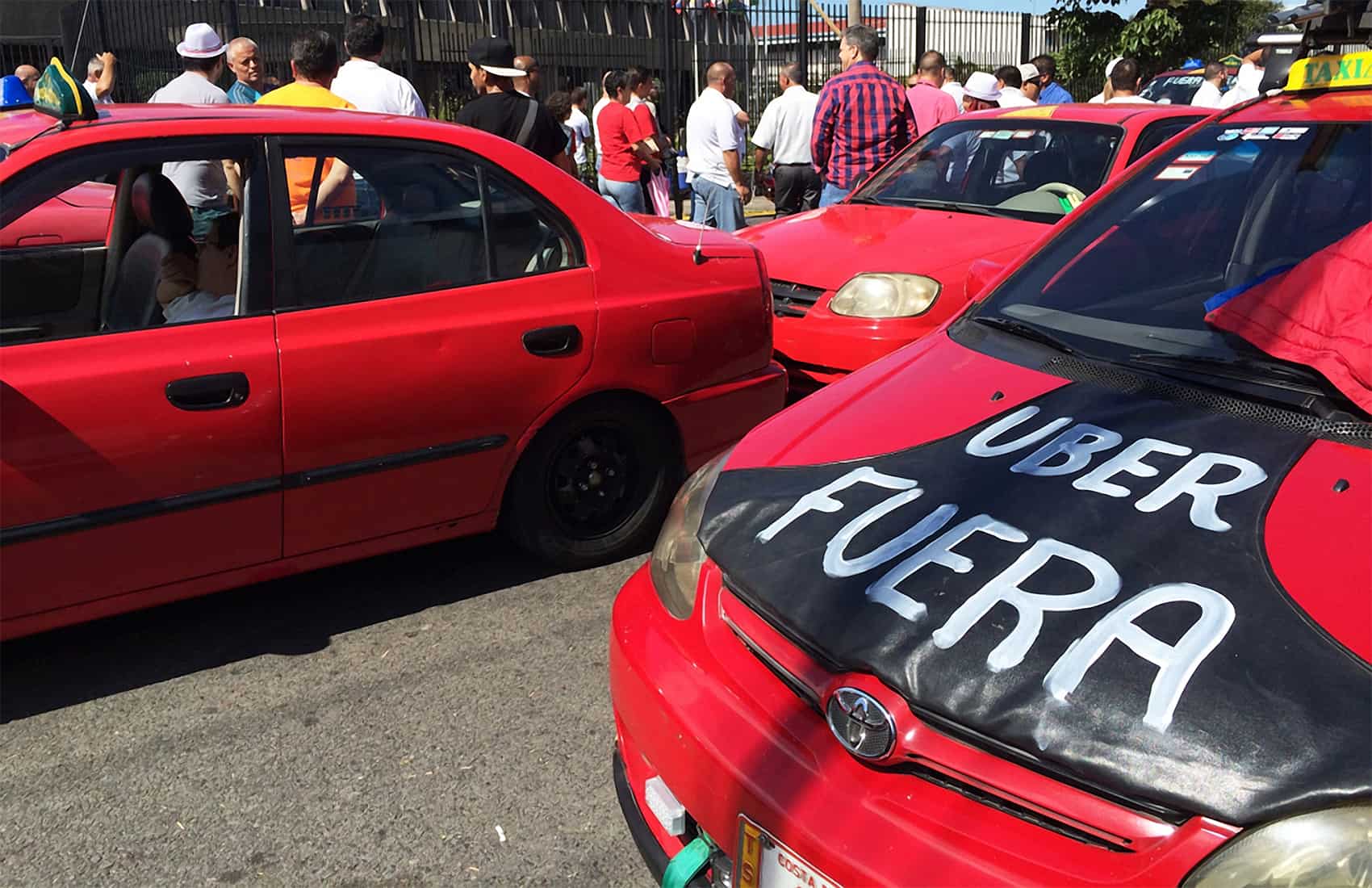 Members of the Union of Costa Rican Taxi Drivers (UTC) will march Wednesday to demand that courts block the ride-hailing service app Uber in Costa Rica.

Union leaders are calling on taxi drivers to gather at 9 a.m. in front of the National Oil Refinery in Calle Blancos, northeast of San José. From there they will march to the San José Administrative Court in Goicoechea.

“We either unite or lose our jobs. United is the only way we can defend our jobs,” the group wrote in a Facebook post.

Wednesday’s march is the latest in a series of demonstrations from official taxi drivers. Protests have been staged in front of Casa Presidencial, at President Luis Guillermo Solís’ house, and along major highways and in downtown San José.

Union secretary general Rubén Vargas said he will ask the Administrative Court to order the government to rule Uber services illegal. The organization will also ask the court to immediately halt the operation of Uber here, pending the issuing of a final ruling on its request.

The Facebook post asks all taxi drivers to join union leaders in the legal case against Uber by signing the complaint.

Taxi drivers also are planning on taking the demonstration to downtown San José. Vargas said that after delivering the petition at the Administrative Court, a group of drivers will go to the Supreme Court and stage a “honk-in” protest. The demonstration is specifically aimed at a complaint filed last year by two Libertarian Movement Party lawmakers who support the legalization of ride-hailing services like Uber.

Lawmakers Otto Guevara and Natalia Díaz filed a complaint with the Constitutional Chamber of the Supreme Court, or Sala IV, against a bill that created the Special Taxi Service, or SEE Taxi, a separate transport service run by private chauffeurs known here as porteadores.

Libertarians believe that bill created a public monopoly on private ride services and therefore is unconstitutional, as well as violating free trade agreements to which Costa Rica is a party.

Sala IV spokeswoman Vanlly Cantillo on Tuesday confirmed that justices have received nearly 800 documents both for and against the Libertarian lawmakers’ complaint.

Among them are two separate petitions filed by taxi drivers. Those petitions included some 20,000 signatures from people supporting taxi drivers’ argument that eliminating the SEE Taxi law would open a loophole for the legalization of Uber and similar apps here.

Cantillo said Sala IV justices in February also admitted a petition from the National Association of Free Consumers asking for the approval of ride-hailing services. The group claims current public transportation laws in the country created a monopoly that is harming consumer rights.

Besides more protests, Vargas said drivers are also working to improve cab services. One strategy involves launching a new app that will “bring benefits for both the driver and the passengers,” the union leader said. Details on the new app are forthcoming.

Uber launched operations in Costa Rica last August, and taxi drivers since have staged street demonstrations against it that escalated in several clashes with Uber drivers and their customers.