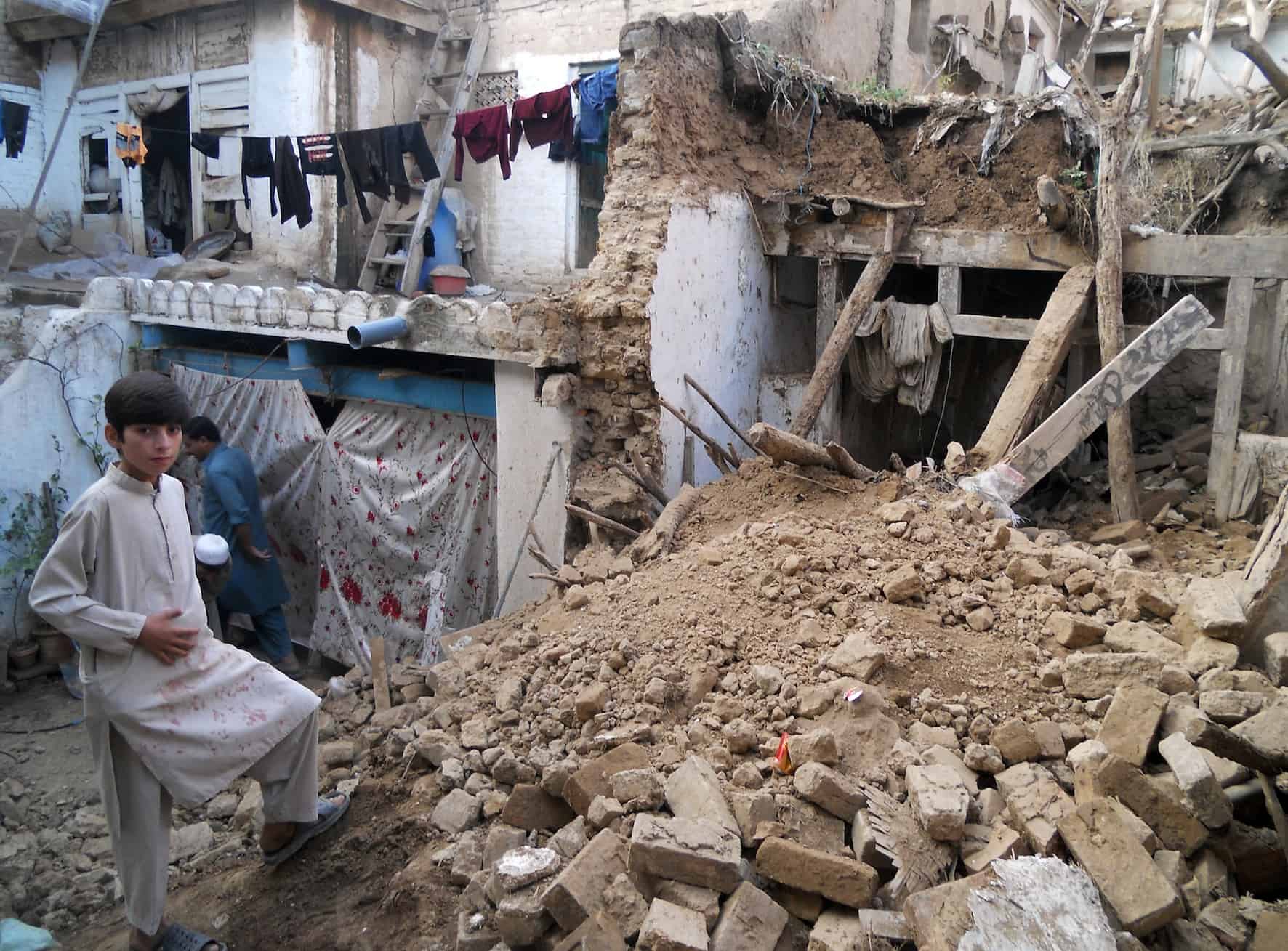 A Pakistani boy stands on the rubble of houses after an earthquake in Kohat on Oct. 26, 2015. A powerful 7.5 magnitude earthquake killed at least 215 people as it rocked South Asia. Thousands of frightened people rushed into the streets in Afghanistan, Pakistan and India as the quake shook a swathe of the subcontinent. (Basit Shah/AFP)

ISLAMABAD, Pakistan — A powerful 7.5 magnitude earthquake which rocked parts of South Asia killed 215 people Monday, including 12 Afghan girls crushed in a stampede as they fled their collapsing school.

At least 1,000 more were injured and hundreds of homes destroyed as the quake shook a swathe of the subcontinent, sending thousands of frightened people rushing into the streets in Afghanistan, Pakistan and India.

It was centerd near Jurm in northeast Afghanistan, 250 kilometers (160 miles) from the capital Kabul and at a depth of 213.5 kilometers, the U.S. Geological Survey said.

At least 63 people were confirmed dead in Afghanistan and 152 in Pakistan, according to officials, with the toll set to rise.

“Exact numbers are not known because phone lines are down and communication has been cut off in many areas,” Abdullah said, adding that the government has asked aid agencies for relief.

“The quake wreaked huge devastation in some districts,” said the governor of Badakhshan province, Shah Wali Adib. “So far 1,500 homes are reported to be damaged or destroyed.”

Horrifying news emerged of at least 12 schoolgirls being trampled to death in a northern Afghan province.

“Twelve students, all minors, were killed and 35 others were injured.”

Arbab Muhammad Asim, district mayor for Pakistan’s northwestern city of Peshawar, said more than 100 people had been injured there alone.

“Many houses and buildings have collapsed in the city,” he said.

Dr Muhammad Sadiq, the head of emergency services at a government hospital in Peshawar said the injured were still being brought in.

“Many are still under rubble,” Sadiq told AFP.

“The building was swinging like a pendulum, it felt as if the heavens would fall,” Peshawar shop owner Tufail Ahmed told AFP.

“I have never seen such a massive earthquake in my life, it was huge,” 87-year-old Peshwar resident Mohammad Rehman said.

The quake, which lasted at least one minute, shook buildings in Kabul, Islamabad and New Delhi.

Traffic came to a halt in downtown Kabul, with frightened people getting out of their cars as they waited for the quake to stop.

Live footage from an Afghan news broadcast showed the anchor abandoning his desk as the quake shook the cameras.

Restaurants and office buildings emptied in Islamabad, with cracks appearing in some buildings but no major damage reported.

“We grabbed each other and were crying, we could not do anything, I felt so helpless,” 16-year-old student Farhana Parveen, whose Islamabad school was evacuated, told AFP.

“I had the scary feeling that the whole world would collapse.”

Hundreds of people in north India poured onto the streets from office blocks, hospitals and homes.

Delhi’s metro ground to a halt during the tremor although the airport continued operating.

In the Kashmir region, panicked residents evacuated buildings and children were seen huddling together outside their school in the main city of Srinagar.

The rescue effort was being complicated by the lack of communications, with the region’s already fragile infrastructure hit.

Gul Mohammad Bidar, deputy governor of Badakhshan in Afghanistan, told AFP lines were down and it was difficult to reach stricken communities.

“The earthquake was very powerful — buildings have been damaged (in Faizabad) and there are possible casualties,” he said.

At least 63 people were killed in Afghanistan, 30 of them in the eastern province of Kunar alone, officials said.

In Pakistan at least 152 people had been killed, according to a tally from local and provincial officials.

The military put the toll at 123 with 956 injured, and the National Disaster Management Authority put the official death toll at 43, but said it was checking unconfirmed reports of more deaths.

One aftershock hit shortly afterwards, with the USGS putting its magnitude at 4.8.

Indian Prime Minister Narendra Modi took to Twitter immediately after the quake, saying that India stood ready to assist, including in Afghanistan and Pakistan if required.

Afghanistan is frequently hit by earthquakes, especially in the Hindu Kush mountain range, which lies near the junction of the Eurasian and Indian tectonic plates.

South Asia’s quakes occur along a major fault line between the two plates — one under India pushing north and east at a rate of about two centimetres (0.8 inches) per year against the other, which carries Europe and Asia.

The epicentre of Monday’s quake was just a few hundred kilometres from the site of a 7.6 magnitude quake that struck in October 2005, killing more than 75,000 people and displacing some 3.5 million more, although that quake was much shallower.

In Nepal twin quakes in May killed more than 8,900 people, triggered landslides and destroyed half a million homes.