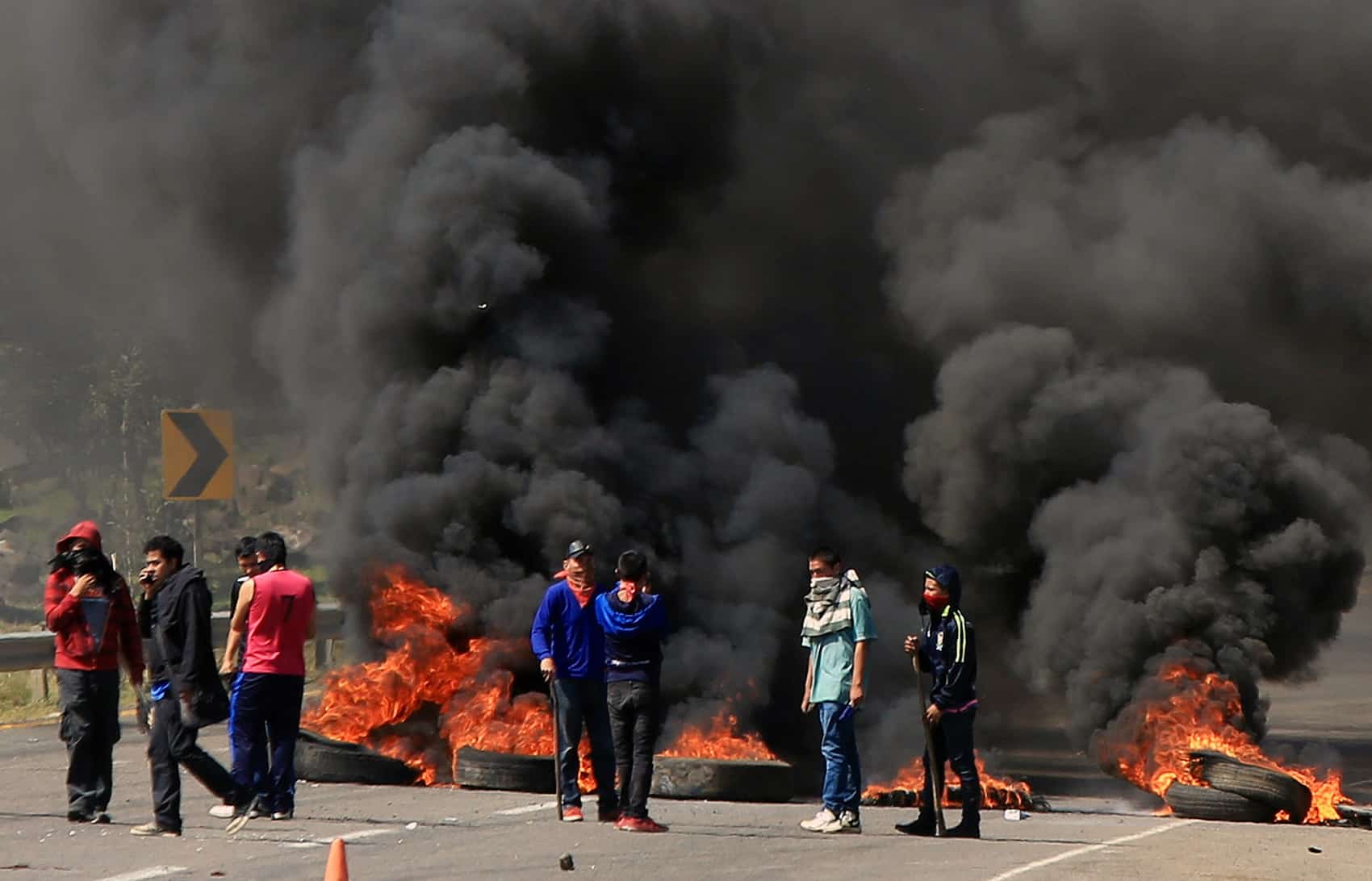 Students from the Tiripetío rural teachers training college block the Morelia-Pátzcuaro road in the state of Michoacán, Mexico, on Sept. 25, 2015. The students from Tiripetío were on their way to Mexico City to participate in a rally on Saturday for the first anniversary of the disappearance of 43 students from a rural teachers college from Ayotzinapa. (Enrique Castro/AFP)

They arrived in buses, just as their children had a year ago. They carried photos of their missing sons and daughters. And they listened as Mexican president Enrique Peña Nieto, a handsome man hardly older looking than their abducted children, promised them that the investigation into the horrific crime had not been closed.

But the parents of the “Ayotzinapa 43″ – students kidnapped and presumed killed on Sept. 26 of last year – were not placated. They were, after all, literally starving for answers.

On Thursday, family members of the disappeared students met with Peña Nieto in Mexico City to present him with a list of their demands. In the middle of a two-day hunger strike, they accused the Mexican government of telling them a “historic lie” about the incident almost a year ago. And they reiterated their plans to protest in the city’s historic center on Saturday – the one-year anniversary of the suspected massacre – and beyond.

“We won’t rest,” María de Jesús Tlatempa, the mother of one disappeared student, told AFP. “We will be a pebble in his shoes. We won’t go home.” A woman passes by the intersection where, on Sept. 26, 2014, Iguala municipal police and cartel gunmen killed six students and kidnapped another 43 from the Ayotzinapa Normal School. Photo for The Washington Post by Jonathan Levinson

Even by Mexican standards, however, the past 12 months have been unusually miserable. First, the students went missing in bizarre circumstances. Then the efforts to find them, or their bodies, only unearthed other mass graves. Faith in Peña Nieto and his government plummeted, particularly after a series of political scandals.

And then there was El Chapo’s July 11 prison escape: an unthinkable twist to an already terrible year.

All the while, Donald Trump tried to turn the country into his personal presidential punching bag, falsely painting Mexico as a land of drug traffickers and rapists and blaming it for America’s ills.

Related: For Mexicans, the Donald Trump candidacy is getting scarier

As the anniversary of the Ayotzinapa students’ disappearance looms, however, it’s becoming increasingly clear that Mexico’s pain and America’s anguish are, indeed, connected – just not in the way Trump claims.

America is in the midst of a deadly heroin epidemic, and the drug is increasingly coming from Mexico. At the same time, American demand for the drug continues to fuel violence in Mexico.

Bodies are piling up on both sides of the border, but so, too, is the blame.

In the case of Ayotzinapa students, Mexico’s misery may be even more directly linked to its northern neighbor. A recently released report suggests that incident, and its alleged government cover-up, probably stemmed from a secret drug shipment hidden inside a bus bound for the United States.

In other words, Saturday’s Ayotzinapa anniversary will likely mean little to most Americans – but it should mean the world.

Imagine 43 American students suddenly vanishing with hardly a trace. Then add half a dozen dead bodies, more than 100 arrests, mass graves, allegations of torture, political scandals, a protest movement not seen since the 1960s and a prison escape by the world’s most wanted criminal.

That is what Mexico has gone through, just in the past year. And that’s not even counting thousands of deaths related to the drug trade.

The year-long nightmare began with a bizarre and bloody night in Iguala, a city in the southwestern Mexican state of Guerrero. On Sept. 26, 2014, roughly 100 students from a teacher’s college in the tiny, poor town of Ayotzinapa commandeered a bus and drove it to Iguala. The plan was to commandeer several more buses – a common practice by student groups in Mexico – to raise money and vehicles for an Oct. 2 trip to the capital.

Once in Iguala, however, all hell broke loose. The students had commandeered a total of five buses, but their vehicles were now under attack from uniformed officials. First, it was tear gas. Then bullets. Then they began dragging the students out of the buses, throwing them into trucks and driving off.

By the time the strange siege ended, six people were dead on the street, including three students and three bystanders. One student was found with his face peeled off. Scores more were alive but injured, some of them shot.

Most terrifying of all, almost half the students were simply gone. Federal police take part in a search on the outskirts of Cocula, Guerrero State, Mexico, on Oct. 19, 2014 for students who went missing in Iguala on Sept. 26, after clashes with local police. Ronaldo Schemidt/AFP

Even in a country where roughly 25,000 people are considered missing, the disappearance of the 43 students created a firestorm of controversy. Student witnesses said that their attackers included city cops as well as what appeared to be federal police, yet, local investigators appeared to do little. Iguala’s mayor, his wife and the city’s police chief went into hiding.

It was nearly a month before the federal government announced it was going to get involved. Peña Nieto met with the families of the missing students for the first time in late October, but by then the families had lost faith in the government.

“We told the president we don’t trust your government,” said one parent, according to the BBC.

“The promises aren’t enough”, said another, Meliton Ortega. “The results will be significant when they return our children to us alive.”

On Nov. 4, nearly six weeks after the students’ disappearance, officials apprehended the mayor and his wife. Then, in an hour-long press conference three days later, Attorney General Jesús Murillo Karam laid out the government’s version of events. Worried that the students and their hijacked buses were going to interrupt his wife’s political event, Iguala mayor José Luis Abarca allegedly ordered that local police get rid of them “by any means,” Karam claimed. Cops shot at the buses, killing six people, and then turned the wounded, terrified students over to a local drug gang, Guerreros Unidos.

The gang then took the 43 students to a trash dump and executed them, burning their remains in a giant funeral pyre and dumping their ashes into a river, Karam claimed, citing alleged testimony from several arrested members of Guerreros Unidos.

“The testimony very unfortunately points to the homicide of a large number of people,” Karam said, indicating that the students were likely all dead.

But the students’ relatives were skeptical of the story. Some thought the federal government was involved in the killings. Others thought their children had been kidnapped by soldiers and could still be alive.

“Since there is no proof, our children are alive,” Felipe de la Cruz, a spokesman for the relatives, told reporters. Protesters demand justice for the 43 missing students along a street in Mexico City on Oct. 22, 2014. Mexican authorities ordered the arrest of the mayor of the city of Iguala, José Luis Abarca, his wife and an aide, charging them with masterminding last month's attack that left six students dead and 43 missing. Ronaldo Schemidt/AFP

Searches around Guerrero state unearthed 60 mass graves containing 129 bodies – but none of them belonged to the students. The investigation was unearthing evidence, but all it showed was that Peña Nieto’s campaign promises of a safer, more prosperous Mexico were premature.

“This latest macabre revelation confirms what we had already found: the sheer magnitude of the crisis of enforced disappearances in Guerrero and elsewhere in Mexico is truly shocking,” announced Erika Guevara-Rosas, Americas Director at Amnesty International.

Anger escalated towards the handsome young president, and on Nov. 20 more than half a million people poured into Mexico City to protest his government’s inaction. Peña Nieto responded by accusing some protesters of trying to “destabilize” the state.

But the Ayotzinapa affair was only one of several scandals to hit the president. Mexican journalists revealed that the president and his telenovela star wife were living in a luxurious $7 million, 10,000-square-foot house that actually belonged to a company affiliated with a business group that has received lucrative government contracts.

And then, of course, there was the escape of Joaquín Guzmán Loera, aka “El Chapo,” from a supposedly supermax prison. The escape was a monumental embarrassment, not only for the embattled president but also for a country that had spent incredible resources to capture him (twice). Since then, things have only gotten worse for the government. Journalists, particularly those working for news magazine Proceso, have picked apart the official Ayotzinapa story, suggesting that federal police and soldiers were involved. Argentine investigators brought in to assist the Mexican government said that they were misled and manipulated. Meanwhile, a group of experts appointed by the Inter-American Commission for Human Rights have released a handful of reports questioning not only the incident, but its investigation.

The most recent report, released earlier this month, claimed that the bodies could not possibly have been burned at the trash dump. It also said federal police and soldiers didn’t stop the attack, and that important evidence – including CCTV footage of the attacks – had been destroyed.

The biggest bombshell was that the students might have been killed not because of any threat to a political speech, but because they happened to commandeer the wrong bus.

There were signs that Iguala buses were being used to transport heroin into the United States, the experts said in their report. The students may have inadvertently taken one of the drug-packed vehicles, prompting corrupt police, crooked politicians and a drug cartel to scramble to recover the multi-million-dollar cargo at all costs.

“This report provides an utterly damning indictment of Mexico’s handling of the worst human rights atrocity in recent memory,” José Miguel Vivanco, Americas director at Human Rights Watch, said in a statement. “Even with the world watching and with substantial resources at hand, the authorities proved unable or unwilling to conduct a serious investigation.”

The bus allegedly full of drugs is more than a glaring miss by the Mexican government, however. It’s also a reminder of how Mexico’s year of misery is interwoven with America’s own drug agony; how bloodshed south of the border is connected to overdoses above it. Mexican President Enrique Peña Nieto delivers his third annual report at the National Palace in Mexico City, on Sept. 2, 2015. He acknowledged his country's "outrage" over a drug kingpin's jailbreak, the presumed massacre of 43 students and other scandals in his state-of-the-nation speech. Alfredo Estrella/AFP

On Thursday, Peña Nieto met the students’ relatives for the second time. He listened to their demands for international oversight of the Ayotzinapa investigation, but didn’t agree to anything concrete, according to AFP. The president did, however, order the creation of a special prosecutor’s office to investigate disappearances.

“We are on the same side and that we want the same thing: to know what happened to every single one of your children, and for justice to be done,” Peña Nieto tweeted afterward. “I assured them that the investigation is still open and will not be shelved.”

For the parents of the missing students, however, Mexico’s year of misery ended in more pain and uncertainty.

“We went today to try and make the government take off its mask, be transparent and help us find our children,” one of the mothers said, according to Vice. “But our government just gives us more psychological blows.”