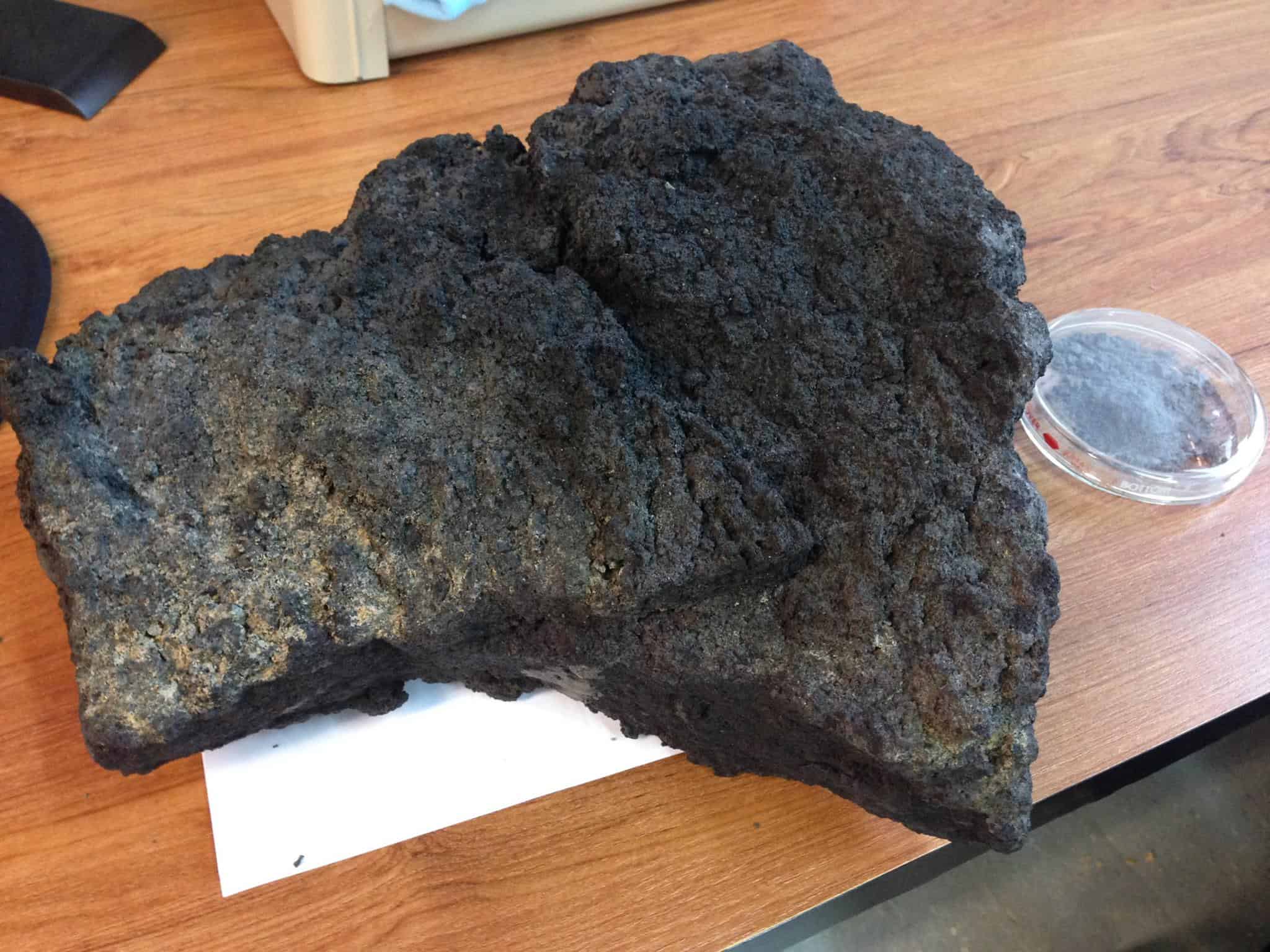 Fragments found near the crater of Turrialba Volcano are believed to be fresh, cooled lava. ((Courtesy of RSN))

Scientists believe they’ve found fresh lava at Costa Rica’s Turrialba Volcano, which may indicate that the volcano has moved into a more active phase. Still, others say it’s too soon to tell.

During a field inspection Friday morning, scientists with the University of Costa Rica’s National Seismological Network (RSN) confirmed the presence of lava at Turrialba, located 50 kilometers northeast of the capital San José. The volcano has been experiencing violent eruptions since last October.

According to a post on the network’s Facebook page, volcanologists found what they believe to be large blocks of fresh, cooled lava near the crater of the volcano. They think that the lava was ejected during an eruption on April 7 at 2:07 a.m., when the volcano was observed ejecting hot rocks and ash two kilometers into the sky.

Volcanologists have suspected the volcano may be erupting fresh lava since incandescent material was observed near the crater during an eruption on March 12. The RSN said discovery of the fragments on Friday confirms that juvenile lava material is being ejected from the volcano.

But vulcanologists with the National University’s Volcanological and Seismological Observatory (OVSICORI) — Costa Rica’s other leading authority on volcanoes and earthquakes — say more studies need to be conducted before the rocks can be confirmed as fresh lava.

“So far we have only seen photos of these fragments,” María Martínez, a geochemist with OVSICORI, told The Tico Times. “While these fragments could be fresh lava, they could also be something else.”

Another possibility, Martínez said, is that a chunk of old cooled magma inside the volcano was dislodged during the last explosion, melted down and re-cooled. In both of these cases, the fragments would not be considered fresh lava. Regardless of whether or not the fragments are lava, OVSICORI said that the April 7 eruption marked a significant step forward in volcanic activity at Turrialba. During field inspections more than a day after the eruption, scientists used a thermal imaging camera to study the volcano and noticed that some of the rocks ejected during the eruption were unusually hot.

“We’ve reached the conclusion that the rocks ejected during the April 7 eruption are coming from much deeper within the volcano,” Martínez said. “The eruptions are coming from gradually deeper areas and building pressure that could bring magma towards the surface.”

That means the magma inside Turrialba Volcano could be much closer to the crater than scientists originally thought.

Since 2010, both RSN and OVSICORI have estimated the magma inside Turrialba to be around three kilometers below the earth’s surface. But the hot rocks reveal that it may be closer to one kilometer below the surface.

This also means that the rocks recovered by RSN very well could be fresh lava, which indicates the volcano has passed on to a more serious phase of activity.

Turrialba Volcano has been in a phreatic eruption phase since 2010, where water is heated below the volcano’s surface and ejected out of the crater along with ash, gas and sometimes rocks. The presence of fresh lava would mean Turrialba is in a phreatomagmatic phase where magma is also lifted to the surface during an eruption.

Phreatomagmatic eruptions often eject large rocks, can shoot lava and are much more dangerous. If Turrialba has entered a phreatomagmatic phase then eruptions will become more frequent and violent, and will require the country to begin considering taking more protective measures.

“This could become a big problem for the country,” Martínez said. “The people who live in the area are exposed to greater and greater danger every day.”