Poet Ernesto Cardenal on Gran Canal project: ‘We should denounce to the world what is happening in Nicaragua’ 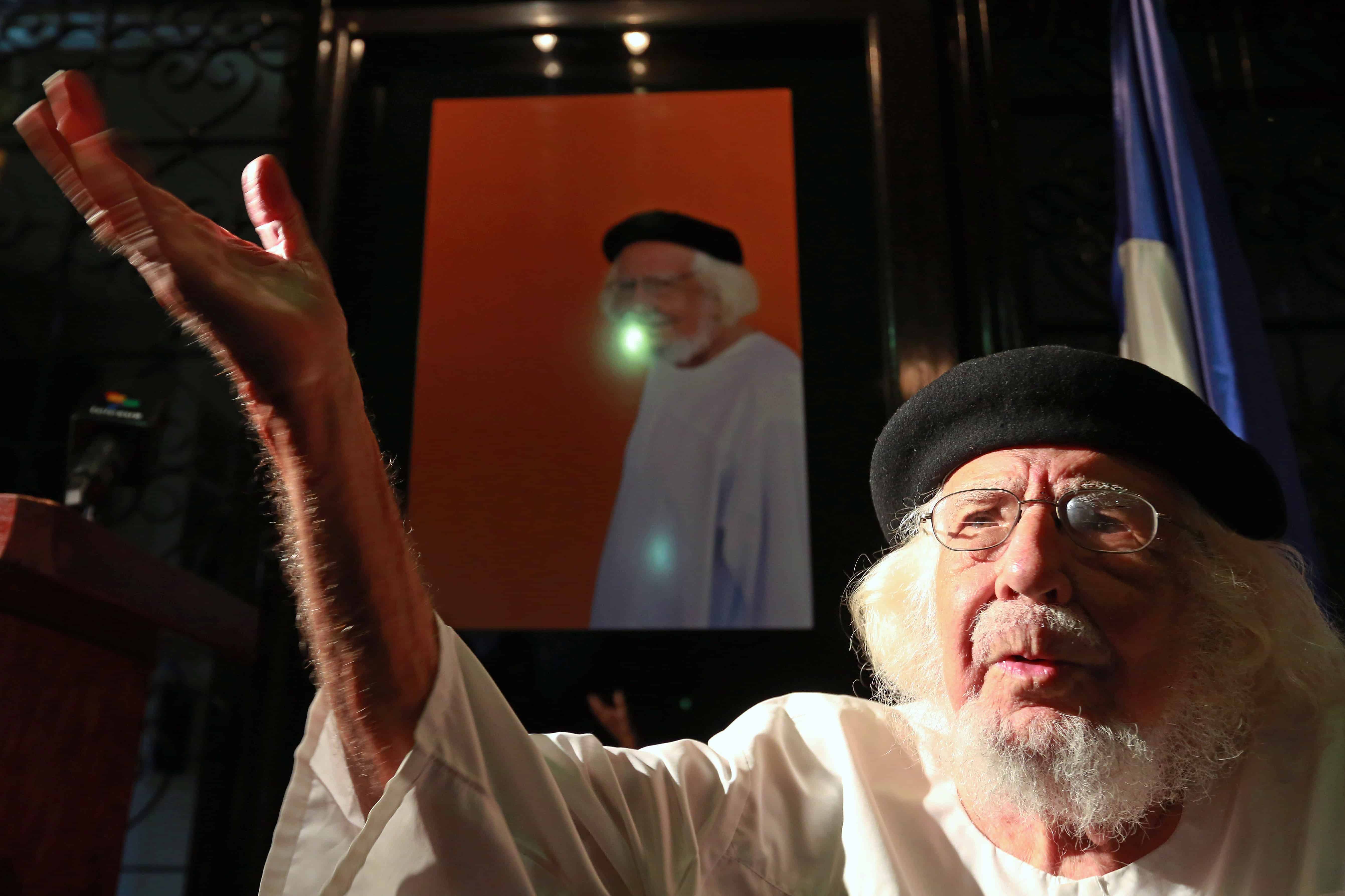 Nicaraguan poet, writer, priest and supporter of liberation theology, Ernesto Cardenal, gestures during a ceremony in which he was decorated with the rank of Officer of the Legion of Honor at the French Embassy in Nicaragua on Sept. 30, 2013. (AFP/Inti Ocón)

Recommended: Nicaragua canal survey off to rocky start marked by fear and mistrust

MANAGUA, Nicaragua – Nicaraguan writer and Catholic priest Ernesto Cardenal this weekend blasted plans for the construction of a massive interoceanic canal, calling it a “monstrosity” that would split the country in two and irreversibly damage Lake Cocibolca, the biggest freshwater lake in Central America.

Cardenal penned an op-ed column in the local newspaper La Prensa titled “La monstruosidad del canal” – “The monstrosity of the canal” – in which he criticized the favorable conditions that the government of Daniel Ortega granted to Chinese businessman Wang Jing in the canal concession.

“We should denounce to the world what is happening in Nicaragua,” Cardenal wrote, accusing Ortega of imposing the project on the country with “power absolute.”

Ortega and his Sandinista administration granted the canal concession in June 2013 to the firm HK Nicaragua Development Investment (HKND), whose owner is Wang, for the construction and administration of the canal for 50 years, with the option to renew for an additional 50 years.

“Our entire national geography has been handed over so that Wang Jing can carry out construction wherever he pleases, and he’ll have all of the permits he needs for any decision he makes,” Cardenal wrote.

The author of “Cántico Cósmico” also highlighted the environmental damage that likely would occur to Lake Cocibolca – also known as Lake Nicaragua, one of Central America’s most important drinking water sources.

“We won’t be able to produce food via irrigation; we’ll only be able to watch the passing of ships. … We also won’t be able to drink the lake water. Many people rely on fishing in the lake to survive, and that’s going to come to an end,” he wrote.

The canal, which is slated to undergo construction beginning next month, will stretch some 278 kilometers from coast to coast, of which 105 km span the lake, according to HKND plans.

Cardenal, who is 89, said the canal would affect 36 cities, as well as several islets that would disappear with the rising of the lake surface level by an estimated two meters.

The Solentiname Archipelago, which was declared a national monument and where Cardenal created a “meditative community” in the 1970s, also could disappear, he said.

“With this canal, Lake Nicaragua, which for us is a blessing from God, will be converted into a curse,” said the author of “El evangelio de Solentiname,” a key piece of literature in the liberation theology movement.

Said Cardenal: “Ruining Lake Nicaragua would be the greatest crime in the history of our country.”

Follow all of our coverage of the Nicaragua canal plans here.