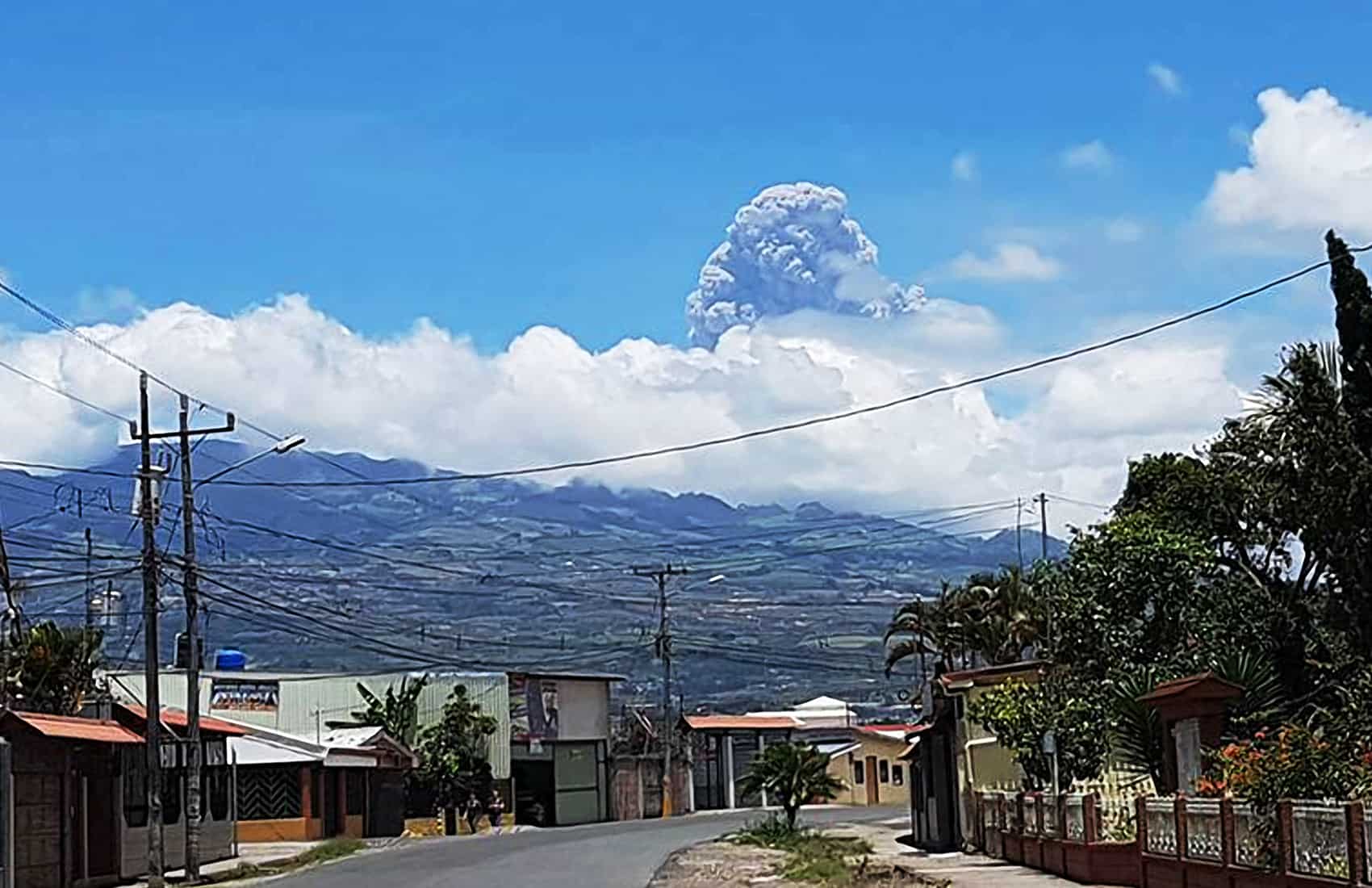 Users of the National Seismological Network's Facebook profile posted pictures of the ash column formed after the explosion of Turrialba Volcano on Sept. 19. ((Via RSN/UCR))

Update: Tuesday, Sept. 20, 6:00 a.m.: Juan Santamaría International Airport was scheduled to be closed until 11 a.m. Tuesday morning as airport crew continue to clean the runways of ash from Turrialba Volcano.

Since the airport closed early Monday afternoon, 52 inbound flights and 68 outbound flights have been cancelled, delayed or rerouted, affecting an estimated 3,000 passengers.

Update: 7:25 p.m. Delta, Copa, Lacsa, United and Southwest have all cancelled flights scheduled to arrive at Juan Santamaría International Airport between 6 p.m. and 11:30 p.m. Monday. Travelers are advised to check with their airline for flight status.

Update: 5:15 p.m. The Juan Santamaría International Airport outside of San José closed at 5 p.m. for the second time Monday. The airport is scheduled to remain closed until 9 p.m., an airport spokeswoman reported.

One JetBlue flight scheduled to leave in the evening was cancelled.

A Southwest Airlines flight scheduled to arrive at 8:40 p.m. was cancelled.

Customers should check with their respective airline for flight status.

Eruptive activity at Turrialba Volcano resumed Monday with two new explosions, one of which reached nearly 4,000 meters (13,100 feet) in height, according to reports from the National University (UNA).

The first eruption of Turrialba, located in Cartago province, some 50 kilometers east of San José, occurred at 2:53 a.m. and lasted about 15 minutes.

The explosion launched ashes, gases and incandescent rocks into the air to about 1,000 meters (3,280 feet) above the volcano’s crater, UNA’s Volcanological and Seismological Observatory of Costa Rica (OVSICORI) reported.

OVSICORI volcanologist María Martínez said that after the second explosion, reports were received of ash falling in communities north and west of San José, including Coronado, Moravia, Tibás, Guadalupe, Escazú and as far away as Alajuela province.

A report from the University of Costa Rica’s National Seismological Network (RSN) states that the second explosion lasted about 13 minutes. RSN volcanologist Raul Mora said the explosion also launched a large amount of gas, ash and rocks into the air.

Ashfall over the runways at Juan Santamaría International Airport prompted a temporary closure of the airport at 1:15 p.m.

Silvia Chaves, a spokeswoman for Aeris, the company that operates the airport, said the preventive closure caused the delay of eight departures and four arrivals.

Chavez said the airport will evaluate the reopening of the airport, pending the results of an inspection.

Both terminals resumed their normal operations at around 4 p.m.

The Cartago volcano is one of Costa Rica’s five active volcanoes, along with Arenal, Poás, Irazú, and Rincón de la Vieja.