Along with being one of the happiest places in the world, it turns out Costa Rica is among the healthiest. A recent study by Bloomberg ranks Costa Rica as the healthiest country in Latin America and 24th worldwide.

Bloomberg used data from the United Nations, World Health Organization and World Bank to create health scores and health risk scores for countries with populations of at least 1 million. The World’s Healthiest Countries list ranks countries by subtracting their risk score from their health score.

The analysis takes into account health indicators including child mortality, life expectancy and mortality rates from 145 countries. It also evaluates health risk factors such as the percentage of the population that smokes, is obese or overweight or has high cholesterol or high blood pressure, among others.

In the Americas, Costa Rica ranks as the second healthiest country behind Canada. The U.S. ranks fifth in the regional list and 33rd in the global ranking.

Other Latin American countries that made the world’s top 50 healthiest countries are Mexico at 37, Panama at 38, Ecuador at 47 and Argentina at 48.

The worst-rated Latin American countries are El Salvador, at No. 78 out of 145 countries, Guatemala at 83 and Bolivia at 93.

Singapore is the world’s healthiest country, according to the Bloomberg ranking, followed by Italy and Australia. 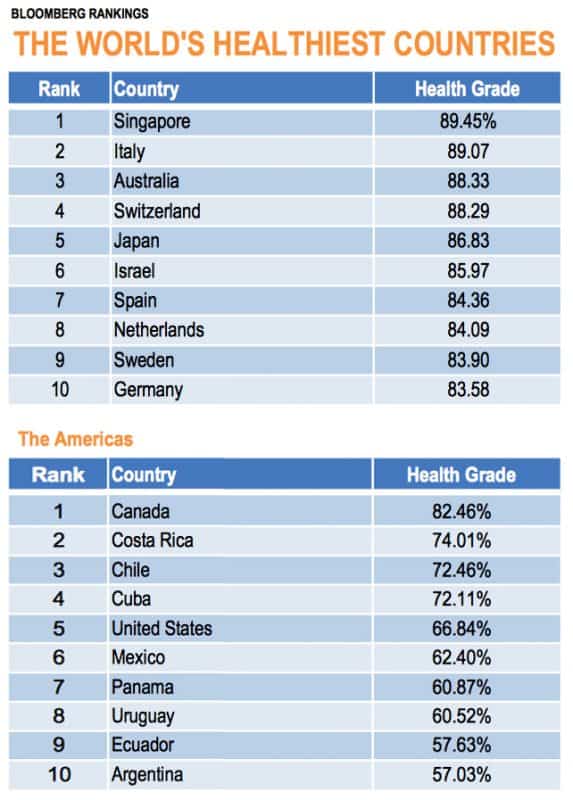