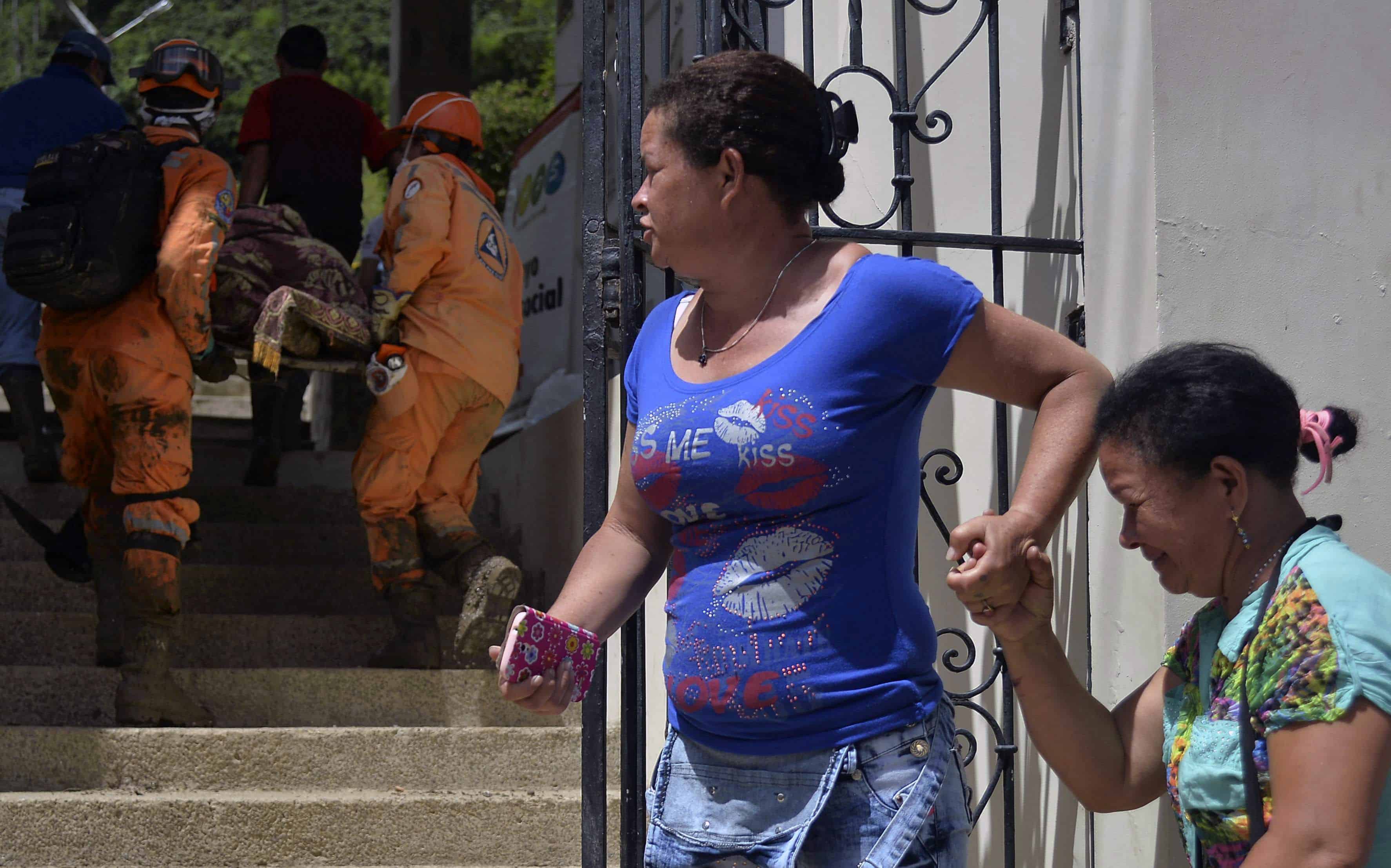 Women react as rescue workers carry a corpse after a landslide in Salgar Municipality, Antioquia, Colombia, on May 19, 2015. (Raúl Arboleda/AFP)

SALGAR, Colombia – Residents of the Colombian town hit by a massive landslide began a difficult clean-up Tuesday, as rescuers resumed the increasingly hopeless search for those still missing after a disaster that claimed at least 64 lives.

After spending the night in shelters, residents of La Margarita, the hardest-hit town, returned to the ruins of their community to search for missing family members or shovel out the mud that filled their homes.

Rescue workers, meanwhile, resumed the search for victims, which they had to call off overnight as the heavy rains that triggered the landslide continued pounding the area.

With the help of residents and specially trained dogs, they swept the area looking for more bodies buried in the mud and hoping to find some of the missing still alive.

But hope was growing slim as the death toll continued to rise. The national disaster management agency said Tuesday morning that at least 64 people were killed in the landslide, increasing its previous toll by two.

Forensics experts have identified 18 of the bodies, which will undergo autopsies in the city of Medellín.

“It’s horrible. There are no words for it. It’s like a dream, like coming in for a landing when you see the magnitude of the disaster,” said Nora Quinceño, who was sleeping like most locals when the disaster struck around 3 a.m. Monday. Residents stand next to rubble after a landslide in Salgar Municipality, Antioquia, Colombia, on May 19, 2015. A massive landslide tore through a ravine in northwest Colombia Monday before dawn. Raúl Arboleda/AFP

At least 40 people were injured in the landslide, which tore through the municipality of Salgar in the mountains of northwest Colombia after the Liboriana River burst its banks and sent a flood of mud rushing down a ravine.

“I had a daughter and granddaughter living there who were swept away. We’re at a loss, we don’t have anywhere to go,” Omar Londono, another survivor, told AFP.

Electricity and water service have still not been restored to the area, but dump trucks arrived to cart off loads of mud and debris.

President Juan Manuel Santos, who visited the area Monday, promised residents: “We will not forget you.”

He described the scene as something out of Dante.

More than 350 emergency workers have been dispatched to the area to assess the damage, set up shelters, distribute drinking water, treat the injured and provide psychological counseling. Residents clean a home after a landslide in Salgar municipality, Antioquia, Colombia on May 18, 2015. Raúl Arboleda/AFP

Santa Margarita, which the local mayor said was practically “wiped off the map,” is one of four towns that make up Salgar, a municipality of 17,000 people in the department of Antioquia.

“The rain fell all night, the river’s current swelled again and that is going to make recovering victims very difficult,” said Alfredo Vergara, the chief of the Salgar fire department.

The hope of finding the missing alive is growing ever slimmer, he said.

“I think what we’ll find now are bodies,” he told AFP.

Officials are monitoring the river to warn residents if there is a risk of another landslide.

Those who lost their homes are being housed in three temporary shelters and on coffee plantations, the main industry in the area.

“It’s not an easy situation. Whole families have been lost,” said César Ureña, the head of the Colombian Red Cross.

Salgar’s Municipal Development Plan for 2012 to 2015 had highlighted the risk of landslides in the area, local media reports said Tuesday.