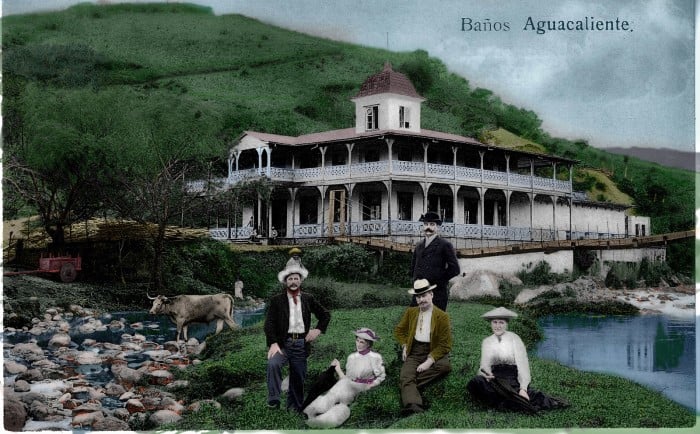 An old postcard shows the Bella Vista Hotel at the site of hot springs south of Cartago. ((Courtesy of Palacio Purapora))

Werner Herzog’s 1982 film “Fitzcarraldo” tells the story of an audacious rubber baron who’s determined to get a steamship over a hill in the Peruvian Amazon in order to access prime rubber territory and make enough money to build an opera house in Iquitos.

The film was pretty good, but a documentary about the making of the film, “Burden of Dreams,” was even better — mostly because it captured just how crazy Herzog became in his quest to recreate the legend.

Cartago seems to have its Herzog equivalent in Israeli adventurer Avraham Kotlitzky. Kotlitzky has been working for the last eight years to recreate a legendary hot springs resort on a hill just south of the city.

The resort was Costa Rica’s biggest tourist attraction in the 1880s and, legend has it, the especially hot waters can cure all kinds of ails, from psoriasis to indigestion.

Tico Times Travel Editor Karl Kahler and photographer Alberto Font went to meet the man behind the madness, and test out the waters. You can read their story in our Travel section.