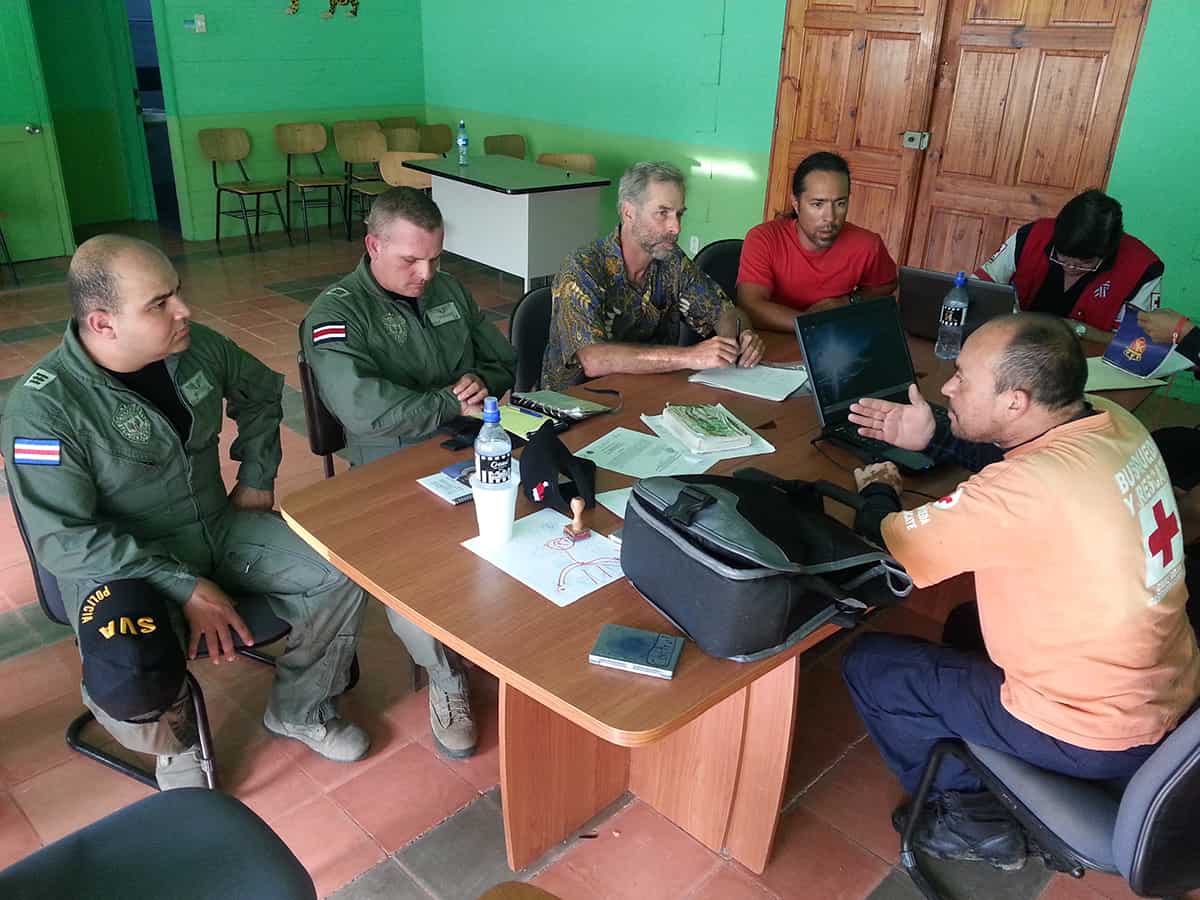 Roman Dial, center right, the father of a missing hiker, meets with Red Cross officials and members of the Aerial Vigilance Service. ((Courtesy of the Public Security Ministry))

The Red Cross, Public Security Ministry and Environment Ministry pulled back volunteers and personnel on Tuesday from efforts to find missing U.S. hiker Cody Roman Dial in Corcovado National Park, on the Osa Peninsula. The Red Cross and the Costa Rican government have been searching for the 27-year-old Alaska native since July 23. Dial has been out of contact with his family since July 10, the day of his planned entry into the park.

Representatives from the U.S. Embassy are now in Puerto Jiménez, near the park’s eastern entrance, to take over the search, accompanied by Dial’s father, Roman Dial, a National Geographic explorer and well-known adventure sportsman. Based on Dial’s emails with his father and sightings by local residents, officials suspect that Dial was hiking alone in the park in areas off-limits to tourists. In order to search these areas, the new search-and-rescue team will need to negotiate for permits with the Environment Ministry.

That team will revisit areas mentioned in Dial’s emails and already searched by Red Cross crews, but conflicting information from local residents who claim to have seen Dial have complicated efforts.

“It has gotten really confusing because we have reports from people who believe they’ve seen him on the same day in areas that are kilometers and kilometers apart,” Gilberth Doundi, one of the Red Cross search coordinators, told The Tico Times. “We believe he left and re-entered the park a number of times, but that is really the only thing we are confident about.”

The Red Cross turned up no sign of Dial in their searches except for a possible campsite in Piedras Blancas National Park, northeast of Corcovado. The teams searched rivers, mining tunnels and waterfalls, but saw no other signs of the young hiker. According to Doundi, search-and-rescuers believe it is possible that Dial left the park and may be elsewhere in Costa Rica.

“We are sending out alerts to beaches and other possible tourist areas, we are monitoring his credit cards in case he makes a purchase, and we have alerted immigration officials to watch for him at the borders,” Doundi said.

When The Tico Times contacted Dial’s father for comment, he said he was preparing to enter the park, but he lost a phone signal before he was able to provide more information.