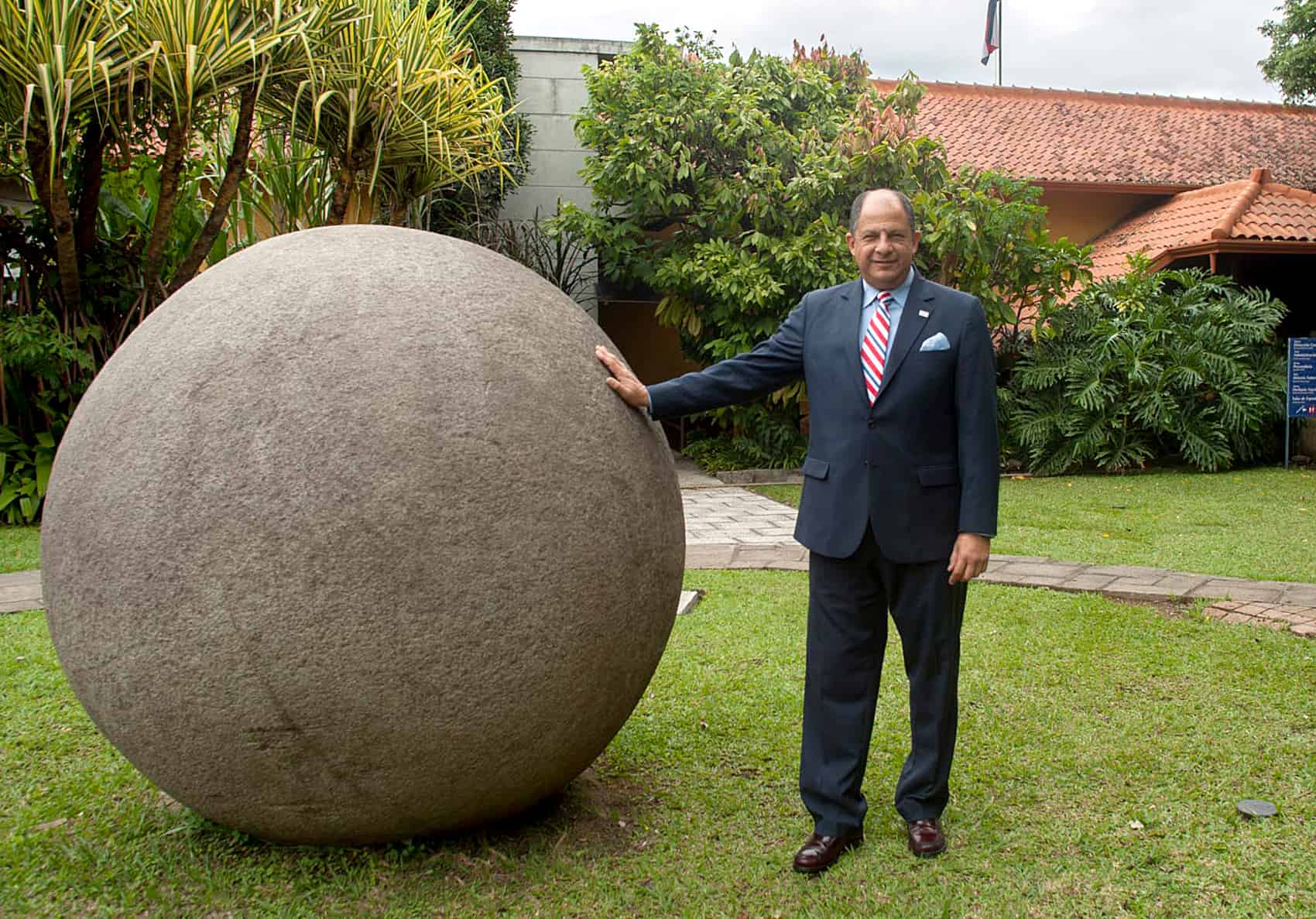 President Luis Guillermo Solís stands next to one of the pre-Columbian spheres at the National Museum in San José on Monday, June 23, 2014. (Courtesy of Casa Presidencial)

Strange stone spheres crafted by pre-Columbian peoples in the southern region of Costa Rica were granted World Heritage recognition from United Nations Educational, Scientific and Cultural Organization on Monday morning. This is the first time Costa Rica has received the honor.

President Luis Guillermo Solís said the international recognition could ignite rural tourism in the economically depressed Southern Zone. The president said he was honored as a Costa Rican and a historian at the news.

The archeological sites Finca 6, Batambal, El Silencio, and Grijalba-2 in the Diquís Delta in the Osa canton received the international recognition after former President Laura Chinchilla (2010-2014) submitted the areas for consideration in June 2012. The perfect spherical quality of the stones, along with their number and density marked them as signs of a complex pre-Columbia society, said UNESCO in a statement.

“Costa Rica has been a destination for ecotourism, but our country is much more than that,” she said. Little is known about the mysterious stone spheres, lending them an air of mystery. Archeologists do not know how pre-Columbian peoples crafted the perfect globes or why. Solís said he hoped the distinction would encourage more research into the objects and their creators.

The president lamented that Ticos have not been well-educated about the artifacts. Solís, a historian by training, recalled cases when the sculptures were pulled out of fields with tractors or even blown up by treasure hunters who thought they were filled with gold. Fonseca added that Costa Rica has long lacked policies that value the contributions of the country’s indigenous and Afro-descendent peoples.

According to Solis and Fonseca, communities in Osa caring for the stones would need additional training to guarantee the preservation of the artifacts. Roughly $1 million would be requested for the next four years to preserve and care for the spheres, said Christian Kandler of the National Museum. The director said that additional funds would be needed to upgrade museums and landscapes displaying the stone spheres, which can weigh over a ton.

The stones, which range greatly in size and weight, are sometimes held in private collections. Kandler told The Tico Times that the National Museum lacked the space and resources to collect and display all the spheres. Instead, the objects are registered with the museum and reviewed once a year to ensure their preservation. Kandler did not specify any change in the museum’s policy now that the spheres are considered part of international patrimony.

Several other sites were added to the World Heritage list, including Bolgar Historical and Archaeological Complex in Russia, Trang An Scenic Landscape Complex in Vietnam, Great Himalayan National Park in India, Mount Hamiguitan Range Wildlife Sanctuary in the Philippines, Stevns Klint in Denmark, Bialowieża Forest in China, and the Wadden Sea shared by Germany and Denmark.