What history tells us about Russia, Crimea and Putin 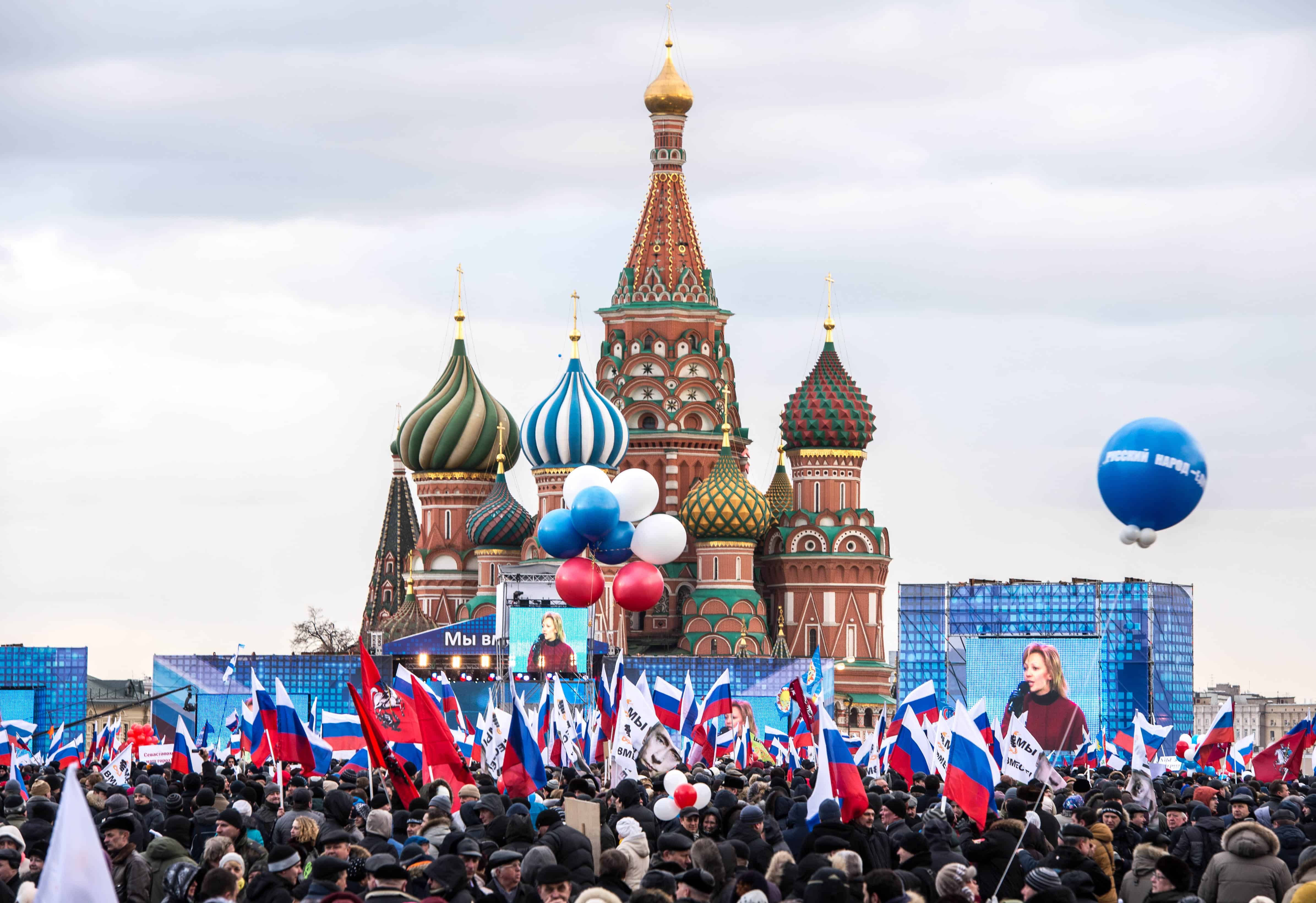 Pro-Kremlin activists rally at the Red Square in Moscow, on March 18, 2014, to celebrate the incorporation of Crimea into Russia. President Vladimir Putin on Tuesday pushed every emotional button of the collective Russian psyche as he justified the move, citing everything from ancient history to Russia's demand for respect to Western double standards. (Dmitry Serebryakov/AFP)

On Tuesday, Russian President Vladimir Putin signed an agreement that formally recognized the “reunification” of the breakaway Ukrainian region of Crimea with Russia. “To understand the reason behind such a choice,” he said in a speech to parliament, “it is enough to know the history of Crimea and what Russia and Crimea have always meant for each other.”

History. That was the central point of Putin’s speech. And he wasn’t just creating history by agreeing to accept Crimea — he insisted he was correcting history. Correcting the historical mistake from 1954 that led to Crimea becoming part of Ukraine.

Putin didn’t stop there. In his speech, he lashed out at the West over the Soviet Union’s downfall, Kosovo, Libya, Iraq and Syria. He argued that the Western historical narrative was twisted; that U.S.-led military action in places such as Kosovo and Libya had been illegitimate and that the United States’ reaction to Crimea’s referendum on joining Russia was naive and hypocritical.

Few Western observers missed the historical references. Fareed Zakaria called the situation “the most significant geopolitical problem since the Cold War,” while Brookings Institution scholar Steven Pifer argued that the Crimea takeover was the “most blatant land grab in Europe” since World War II.

Putin believes he has learned history’s lessons. But has he?

The collapse of the U.S.S.R. has always been a bugbear for Putin: Not so much because he loved Communism, but because it seemed to mark the end of Russia’s time as a great power at the center of an empire.

In his speech, the Russian president returned to his anger over the end of the Soviet era. “Millions of people went to bed in one country and awoke in different ones,” he said, “overnight becoming ethnic minorities in former union republics, while the Russian nation became one of the biggest, if not the biggest, ethnic group in the world to be divided by borders.”

The situation, he said, was especially significant in Crimea, which became part of Ukraine in 1954 at the “personal initiative” of Communist Party head Nikita Khrushchev. “It was only when Crimea ended up as part of a different country that Russia realized that it was not simply robbed, it was plundered,” Putin said.

Putin’s theory on Crimea’s place in Russian history makes some sense: The peninsula had been part of Russia from 1783 to 1954 and even under Ukrainian rule housed Russia’s Black Sea Fleet. It’s not always a pretty history, though: The entire Crimean Tatar population was deported during World War II, and a huge number are thought to have died. Putin touched on this in his speech, admitting that the Crimean Tatars were “treated unfairly” but adding that “millions of people of various ethnicities suffered during those repressions, and primarily Russians.”

Putin also neglected to mention that Crimea’s decision to remain part of Ukraine after the collapse of the Soviet Union came in a referendum on independence in December 1991. In that election, 54 percent of Crimean voters favored independence from Russia — a majority, though the lowest one found in Ukraine.

Two of the most important events in post-World War II history were the division of Germany among Allied powers and the subsequent reunification of Germany after the Soviet Union’s collapse.

“I believe that Europeans, firstly Germans, will understand me,” Putin said during his speech, pointing out that Russia had supported German reunification when others hadn’t. “I am certain that you have not forgotten this, and I count that German citizens will support the aspiration of the Russian world and historical Russia to restore unity.”

It’s true that Russia did play a significant role in reunification negotiations after the fall of the Berlin Wall in 1989, with Mikhail Gorbachev a key supporter of a tactic that allowed the two Germanys to negotiate on their own, without outside powers coming in until later. Regardless, it doesn’t seem as if Germany feels much gratitude here. German Chancellor Angela Merkel has been a frequent critic of Russia’s stance on Crimea over the past few weeks.

After the fall of the Iron Curtain, Yugoslavia fell into a number of wars that eventually led the country to split into the states of Bosnia and Herzegovina, Croatia, Serbia, Slovenia, Montenegro and Macedonia.

Of particular note was the Bosnian war, which began in 1992 after a successful referendum on independence in the multiethnic region, despite a significant boycott by members of the Serbian minority and their attempts to establish their own state. After Bosnia and Herzegovina declared independence, Bosnian Serbs, with the support of Slobodan Milosevic’s Yugoslav government, began a strategy of ethnic cleansing of Muslim Bosniaks and Croats in the eastern part of Bosnia. After the massacre at Srebrenica in 1995 (during which an estimated 8,000 unarmed Muslim men and boys were killed in a U.N. safe area), NATO intervened with a sustained air campaign called “Operation Deliberate Force” that attacked Bosnian Serb forces. Within months, a peace agreement was reached.

The breakup of Yugoslavia, and especially the Bosnian war, has an interesting legacy for Russia in light of the situation in Crimea. At the time, Russia contributed forces to help with the NATO-led peacekeeping efforts, but later events, including in Kosovo and the allegations that Russia was helping to hide Bosnian Serbs involved in atrocities, made it clear that Russia wasn’t happy with how things went.

In a key part of his speech, Putin contrasted the situation in Crimea with that of Kosovo, an Albanian-majority region of Serbia that was eventually recognized as independent in 2008.

“The Crimean authorities referred to the well-known Kosovo precedent,” Putin said, “a precedent our Western colleagues created with their own hands in a very similar situation when they agreed that the unilateral separation of Kosovo from Serbia, exactly what Crimea is doing now, was legitimate and did not require any permission from the country’s central authorities.” He later added that the U.N. regulation on declarations of independence was “crystal clear, as they say.”

Putin is right that in some ways Crimea, with its Russian majority, does look a little like Kosovo, with its own Albanian majority. Both held successful referendums on independence against the wishes of the states they were a part of.

But what’s more significant than the similarities between Crimea and Kosovo are their differences. In The Guardian newspaper, Daniel Drezner has pointed out that NATO only intervened in Kosovo in 1999 after significant evidence of Serbian abuses was collected. Notably, while NATO military action wasn’t sanctioned by the U.N., it did take place after the adoption of U.N. Security Council Resolution 1199, on which Russia had voted.

Perhaps more important, although Kosovo was a de facto independent state after NATO intervention, it didn’t formally announce independence until 2008. That’s almost 10 years between conflict and independence, rather than the mere weeks it has taken in Crimea. Even then, a significant number of states and organizations, including Russia, China and even the United Nations, have not recognized Kosovo as a sovereign state. Putin does have an argument, but it’s certainly not a “crystal clear” situation.

Ultimately, Putin’s appeal to history merges two strands of his political thought: The memories of a Russian empire that drive his plans for a Eurasian Union and his belief that the West’s international dominance is decadent and undeserved.

Where he trips up, however, is in arguing that history can act as a justification in the Crimea situation. History is often complicated and incoherent: Europe’s ever-changing borders don’t necessarily justify anything.