Selfie with a wild animal? Not in Costa Rica

Slothy Sunday: For the love of sloths 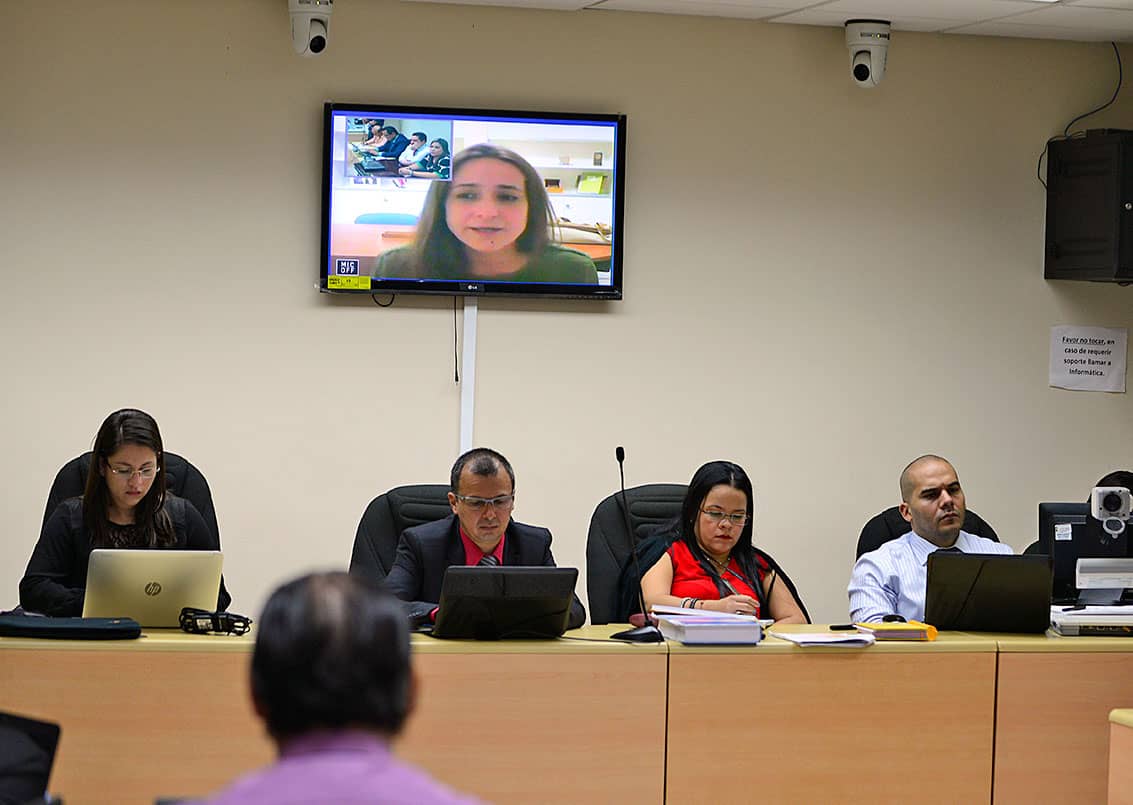 Almudena Amador testified Monday via video conference in the retrial of murdered sea turtle conservationist Jairo Mora. She was kidnapped along with Mora in 2013. (Lindsay Fendt/The Tico Times)

LIMÓN, Limón — Tangled wires and malfunctioning microphones interrupted crucial testimony in the Jairo Mora murder retrial Monday morning as technicians struggled to maintain a Skype connection with a key witness testifying from Madrid, Spain. The witness, 28-year-old Almudena Amador of Spain, was kidnapped and sexually assaulted along with three U.S. women while on a beach patrol with sea turtle conservationist Jairo Mora, who was murdered that same night.

The seven alleged sea turtle egg poachers accused of the murder and the crimes against the four women were acquitted last January, but the verdict was overturned by an appeals court. In the original trial, judges barred Amador from testifying, relying instead on written transcripts of police interviews with the four female  kidnapping victims. But this time around — seeking to avoid the mistakes of the last trial — prosecutors and Amador herself insisted on her live testimony.

“This time she’s like a bulldog,” said Vanessa Lizano, who ran the animal rescue center where both Amador and Mora worked at the time of the crimes. “She’s determined to testify.”

Despite her face sporadically pixelating like a moving Picasso painting on the courtroom monitor, Amador delivered a clear account of her kidnapping and assault.

She had been working as a veterinarian at the Costa Rican Wildlife Sanctuary on Moín beach just outside Limón at the time of Mora’s murder on May 30, 2013. Mora, a 26-year-old sea turtle monitor for a local NGO, was also based out of the sanctuary.

It was one of the last nights at the sanctuary for one of the U.S. volunteers, and Mora agreed to take her and the three other volunteers out to the beach at night in hopes of catching a glimpse of a nesting leatherback sea turtle.

Mora knew the night patrol was risky, and according to numerous witness testimonies, he had been getting death threats from local poachers who disapproved of his conservation activities. Amador said she hesitantly agreed to drive.

“Jairo always helped me with the animals in the rescue center and I knew that it would be easier and a little bit safer with the car,” she said. “So even though I was afraid of being on that beach, I went with them.”

Though the group did spot a leatherback turtle, that was the end of their good luck. On their way back to the rescue center, Amador stopped at an obstacle in the road and the car was overtaken by a group of masked men. They threw Jairo in the trunk and put Amador in the backseat with the other volunteers. As they took off back towards the beach, Amador couldn’t understand why Mora was silent from the trunk. She reached her arm back and put her hand into his. He gently squeezed it.

For a full account of the night’s events see: Why Jairo Died

Amador went on to describe being taken to an abandoned house with the other women where they were held for several hours and sexually assaulted. Eventually, their captors left and, near dawn, the four women made it back to the rescue center. Several hours later, she said, the police came and told her they found her car with Mora’s body beside it.

“I couldn’t believe it, I thought they were joking,” she said. “But they just looked at me and said, ‘Señorita, we don’t joke with these kinds of things.’”

During her testimony, Amador was able to identify physical features of four of the assailants. She also described seeing a green bus surrounded by three men. According to prosecutors this bus was registered to Felipe Arauz, one of the defendants. Despite her determination to testify, Amador said she was too afraid to come back to Costa Rica to testify in person.

“No, [I won’t come back], and it’s upsetting because it really is a paradise,” she told the courtroom. “But I went to Costa Rica thinking it was green and safe, but obviously it isn’t safe. And as for green, it’s clear that there is a fight ahead to continue doing the [conservation] we were doing there. If not, you will lose much more than the turtles.”

Alejandro Zúñiga - Feb 19, 2020
Do NOT follow this link or you will be banned from the site!