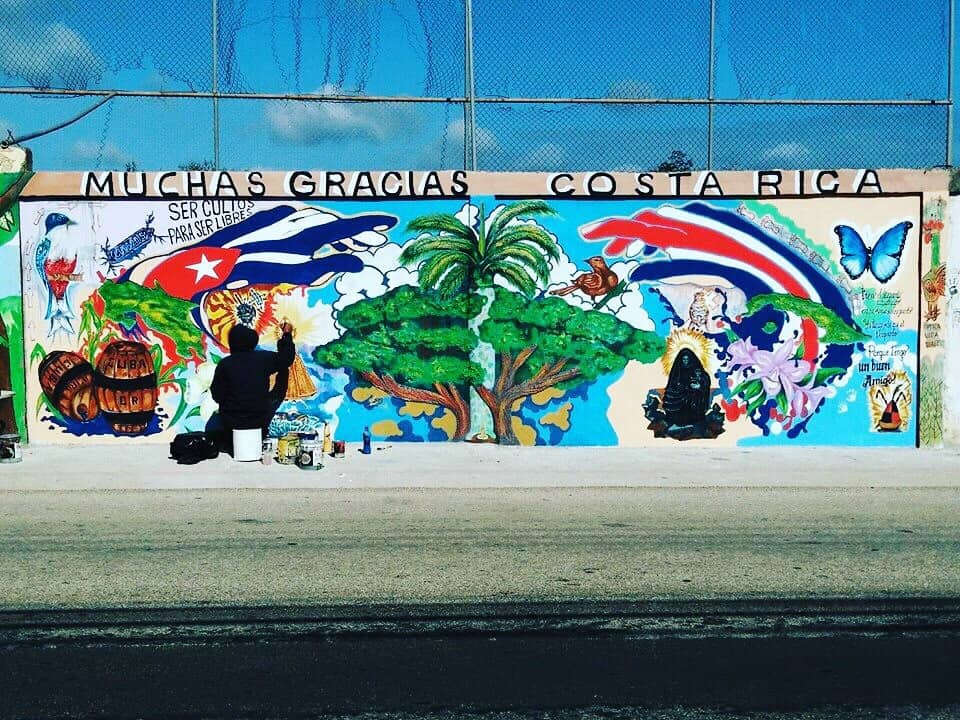 A mural painted by Cuban migrants staying at a shelter in the town of La Cruz, Guanacaste, near the border with Nicaragua. (Courtesy: Gustavo Zeledón, Municipality of La Cruz)

After Central American countries spent months at loggerheads over what to do with thousands of Cuban migrants stranded in Costa Rica en route to the United States, a solution finally has been reached.

Cuban migrants with temporary Costa Rican transit visas will be allowed to fly from Costa Rica to El Salvador, where they will be allowed to travel by bus through Guatemala and Mexico and up to the United States border, according to a statement from the Costa Rican Foreign Ministry Monday evening. If they can manage to set foot on U.S. soil, the Cuban migrants can claim refugee status and permanent residency, thanks to the 1966 Cuban Adjustment Act.

The flights out of Costa Rica could start as early as next week, according to a statement from the Guatemalan Foreign Ministry. Migrants will be expected to pay for their own flights and bus transportation. The exact details of the agreement and the logistics have not been publicly released, including what will happen to migrants who cannot afford the plane fare to leave Costa Rica.

Costa Rica’s Immigration Administration has issued 8,000 temporary visas to Cuban migrants since Nov. 14 and there are 37 temporary shelters housing many of them across northern and central Costa Rica.

President Luis Guillermo Solís is scheduled to meet with U.S. Rep. Kay Granger and Rep. Henry Cuellar, both from Texas, at the Daniel Oduber International Airport in Liberia, Guanacaste on Tuesday afternoon to discuss the immigration crisis.

Monday’s meeting in Guatemala was the first success in a series of frustrated attempts to secure a regional agreement to allow the Cubans to pass through the isthmus. Cubans typically require restricted visas to travel to Central American countries and Mexico.

After one failed meeting earlier this month, President Solís announced that Costa Rica would suspend political participation in the Central American Integration System, or SICA, a body designed to address issues that affect the isthmus. Solís was exasperated by the perceived “lack of solidarity” between Central American nations over the crisis.

The Cuban migrant crisis started on Nov. 10, when Costa Rican authorities dismantled a human smuggling network that ferried migrants from Panama, through Costa Rica and into Nicaragua on their way north. Costa Rica announced it would close its border to the migrants, and a crowd of more than a thousand Cubans quickly amassed at the Costa Rica-Panama border checkpoint at Paso Canoas.

Costa Rica started issuing temporary transit visas to Cubans on Nov. 14, but the Nicaraguan military violently turned back hundreds who tried to cross the border en masse on Nov. 15. The migrants continued arriving in Costa Rica until the government stopped issuing the temporary visas on Dec. 18.

The Solís administration previously said that it would not deport any Cubans back to the island who were in the country with a visa, but the same courtesy would not be extended to those entering the country after Dec. 18. The Immigration Administration recently announced it would deport 56 Cubans who arrived after the visa deadline.