‘Cocorí,’ a racism debate, and a brief history of controversial children’s lit 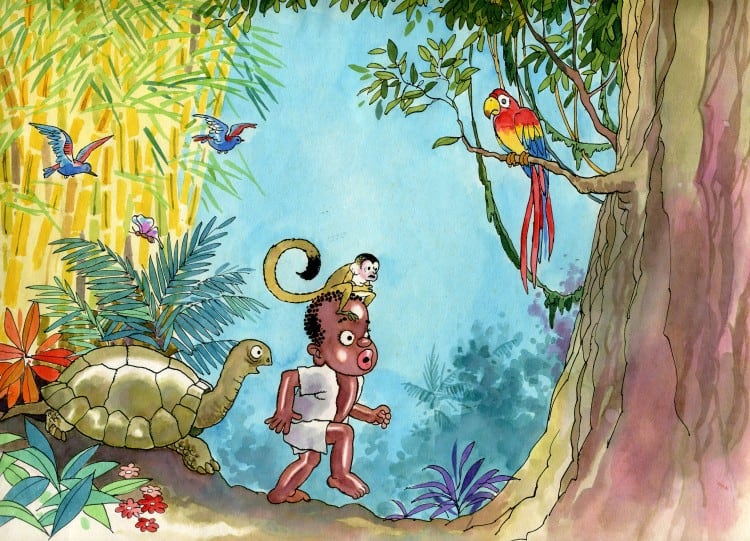 “Cocorí” has raised ire among some Afro-Caribbeans, who find its depictions racist, and fans, who fear censorship. ((Courtesy The National Theater))

Not long ago, legislator Epsy Campbell Barr took issue with one of the most famous works in Costa Rican literature, “Cocorí.” Written in 1947 by Joaquín Gutiérrez, the book is required reading in public schools. But Campbell objects to this requirement, because she says the book has racist content. She also objected to a new musical adaptation by the National Music Center, which led to a freezing of the project.

The book concerns an Afro-Caribbean boy who stumbles into a blonde girl from a distant land. She gives him a rose, then asks Cocorí to find her a monkey as a gift. He spends most of this book embarking on this quest, interacting with talking turtles, crocodiles and snakes. He narrowly avoids getting eaten in the jungle, and meanwhile contemplates the fleeting nature of happiness.

Whether you find “Cocorí” racist may depend on how you perceive the image above. Since its publication, Cocorí has become a beloved classic of Costa Rican literature. There is a Cocorí bookstore in Escazú, a Hotel Cocorí, and cocori.com, a tourism information site. An English-language version of the book presents a more stylized illustration, reminescent of artist Romare Bearden. Courtesy of Goodreads

But you might also look at a large-lipped, wide-eyed, kinky-haired boy with an unbuttoned shirt searching for a monkey and feel uncomfortable – or even horrified – by the caricature. Many different artists have illustrated their version of Cocorí, and in many different styles. Yet “Cocorí” has enflamed debate since at least the 1990s. An art exhibit last year at TEOR/éTica gallery took its inspiration from “Cocorí” and the ways that Afro-Caribbeans are represented in Costa Rican media.

Predictably, the disagreement has become a polarizing debate about racism versus censorship, and everyone from Facebook users to the president have weighed in. Children’s books are always a sticky issue, because they are often the first stories a child ever encounters. The literature we read in youth, say critics, might impact our worldview for years to come. Throughout the world, concerned parents and politicians have disputed the appropriateness of certain works, duking out their philosophical differences in newspapers and courtrooms.

In honor of this ongoing debate, here are some examples of beloved children’s books that have caused controversy or fallen completely out of favor. Most of these authors probably did not consider their depictions racist, but their words and illustrations have become more controversial over time.

When the first “Uncle Remus” book was published in 1881, people loved it. Like Costa Rica’s own Tío Conejo, Br’er Rabbit was a wacky bumpkin who liked to play jokes on his fellow mammals. The idea of publishing African-American folktales might have seemed progressive for the time, considering lynching was a routine pastime in the U.S. South during Reconstruction, and phrenologists viewed African-Americans as an inferior species. (Even Mark Twain allegedly read “Uncle Remus” tales to his children.) The stories were so beloved that Walt Disney Studios produced its film adaptation, “Song of the South,” in 1946. Today, the movie is widely viewed as unwatchably offensive – so much so that Disney no longer distributes the film in the United States. You can easily find the book, but it isn’t read in your standard U.S. kindergarten.

In many ways, “Peter Pan” both celebrates and critiques the nature of youth: A boy who never grows up is always vibrant and fun, but he remains immature his entire life. Neverland is exciting and full of adventure, but the “Red Indians” of J.M. Barrie’s novel don’t sit well with a modern adult. Concerned parents might accept an 8-year-old pretending to beat a tom-tom, speaking in broken English and claiming to be of the “Piccaninny tribe,” but they might object to this portrayal of Native Americans in a public school classroom. And in case you aren’t current on your Edwardian slurs, “Piccaninny” was not a flattering word, even in 1911.

Overall, the Belgian journalist Tintin is a globetrotting do-gooder, and he interacts with all kinds of different people. He’s a brave and accepting little rascal, and his natural curiosity makes him a worthy hero – until he arrives in the Congo. Tintin’s African adventure is one of the most infamous episodes in popular comics, and Tintin’s creator Hergé later expressed regret over his embarrassing portrayal of Congolese people. As expected, Cracked.com provides a hilarious, NSFW analysis of exactly what’s wrong with “Tintin in the Congo.” The not-funny part of this story is how thoroughly the Congolese suffered at the hands of the Belgians.

Like most of Rudyard Kipling’s books, there are at least two ways of looking at the children’s story “Rikki-Tikki-Tavi”: On the one hand, it’s the tale of a heroic mongoose who dutifully protects his home from venomous snakes. He cares about his adoptive human family, and he fearlessly fights off the home invaders. On the other hand, “Rikki-Tikki-Tavi” is a nonsense name for an animal that could easily represent the loyal Indian servant. Just as British imperialists invaded India and violently subjugated its people, the English family builds a house and must fend off “natives,” here represented as conniving serpents.

Much like “Uncle Tom” and “Mammy,” the very name has become a synonym for racism. In the United States, even uttering the phrase “Little Black Sambo” is to invite a long and passionate argument about race relations. But it’s safe to say that most people have never even read “Little Black Sambo,” the original book by Helen Bannerman. The plot itself is harmless, even a little trippy, with talking tigers that turn into butter. (No, really.) If the protagonist’s name were changed to “Eustace,” it might not receive a second glance. Weirder still, the story takes place in southern India, and Bannerman was Scottish. In this case, the name has become far more significant than the original text.

How will “Cocorí” seem to Costa Rican readers in 60 more years? Only time will tell.