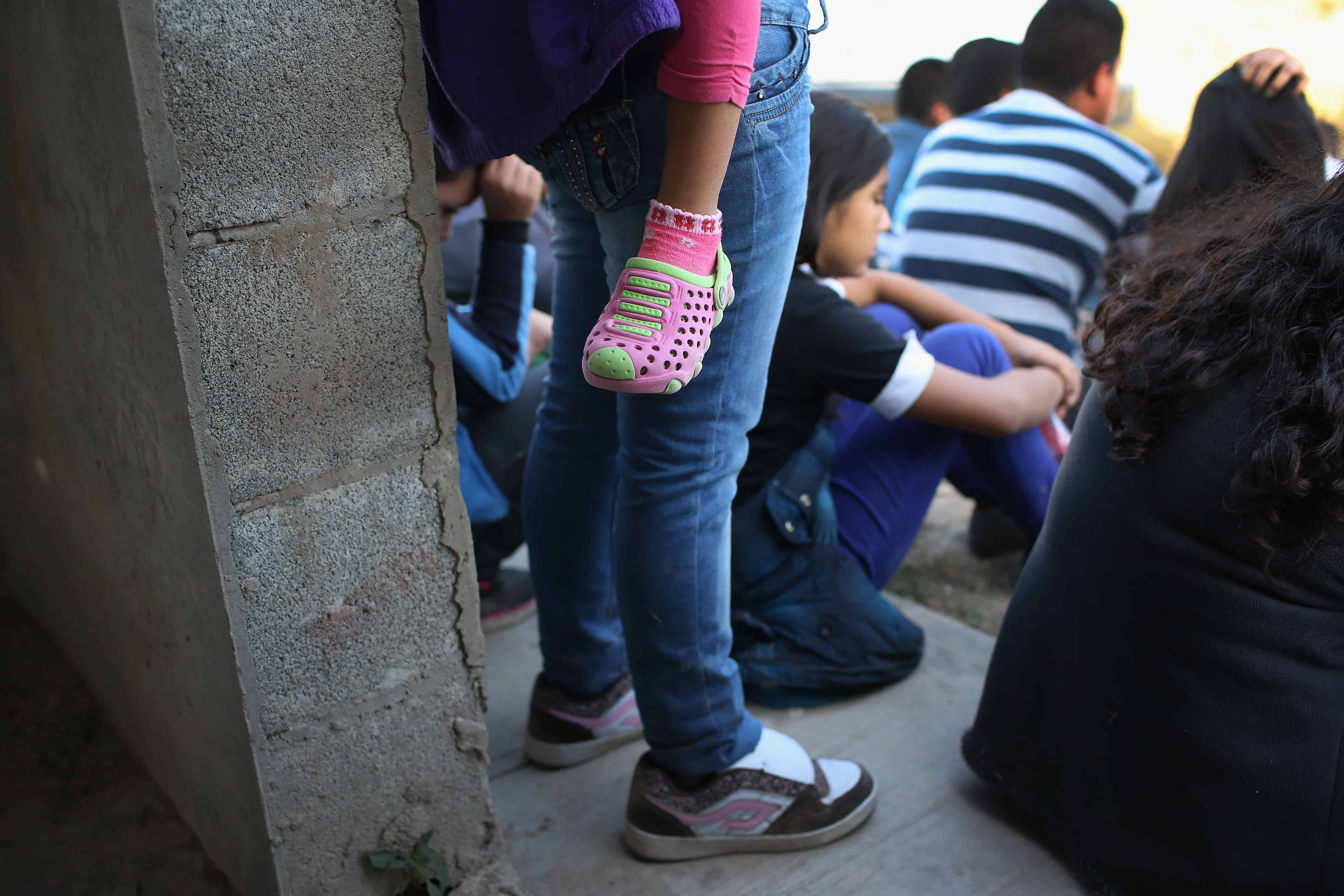 Central American migrants wait to be processed after turning themselves in to U.S. Border Patrol agents on Dec. 8, 2015 near Rio Grande City, Texas. (John Moore/Getty Images/AFP)

Unaccompanied minors are crossing the U.S. Southwest border in growing numbers again, sparking concerns that the new influx of children could eventually approach the levels that last year prompted the Obama administration to declare a humanitarian crisis.

In October and November, more than 10,500 children crossed the U.S.-Mexico border by themselves, the vast majority from El Salvador, Guatemala and Honduras, according to U.S. government data analyzed by the Migration Policy Institute, a nonpartisan think tank. That’s a 106 percent increase over the same period last year, reflecting a steady increase that began in March.

The numbers are still far below the peak period last year, when more than 10,600 unaccompanied minors crossed the border just in the month of June, swamping federal resources. And the administration, widely believed to have missed the warning signs before the previous surge, “is certainly a lot more concerned and on top of it than they were two years ago,” said Marc Rosenblum, deputy director of the U.S. immigration policy program at the policy institute.

Still, the administration and immigrant advocates are growing increasingly worried, especially because some of the same conditions that drove last year’s surge, including gang and drug-related violence in Central America, have grown even worse. The Department of Health and Human Services, which is required to shelter and care for the children after they are apprehended by the Department of Homeland Security, last week opened a new, 700-bed shelter in Texas and is planning to open another 300-bed facility in Texas as early as Friday. A third, 400-bed facility in California may also be needed, officials said.

“This sharp increase in children entering this country is a result of many factors,” HHS Secretary Sylvia Burwell wrote in a letter last week to the House appropriations committee. “While it is impossible to know if these trends will continue for the duration of the fiscal year, we are very concerned about having adequate resources to meet the needs of the unaccompanied children.” The letter urged lawmakers, who are negotiating final details of a year-end spending deal, to grant President Obama’s request for a contingency fund of up to $400 million if the numbers of children continue to grow, beyond the nearly $950 million already requested for the unaccompanied minors program. 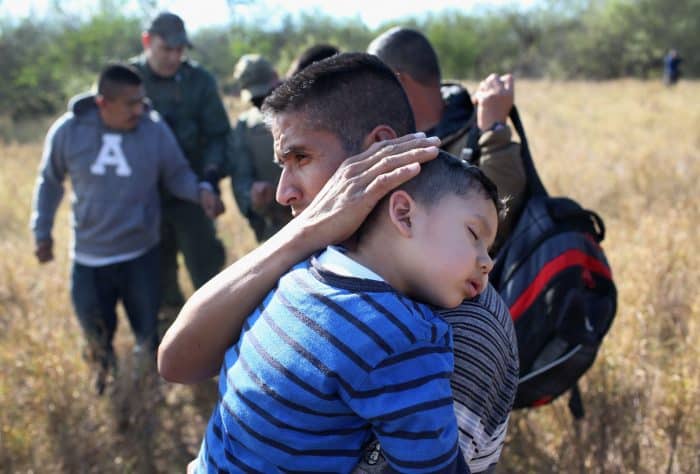 A father holds his sleeping 3-year-old son after they and other undocumented migrants were detained by U.S. Border Patrol agents on Dec. 7, 2015 near Rio Grande City, Texas. John Moore/Getty Images/AFP

The concern also extends to the state level, where Texas Gov. Greg Abbott (R) 0n Tuesday ordered Texas National Guard troops to remain at the Mexico border, extending a mission that began last year at the height of the surge. It is unclear how many troops will remain.

In a joint statement, HHS and DHS said the entire administration “has been closely monitoring these current trends and coordinating across the whole of government to ensure an effective response to any changes in migration flows.” The statement added, “We continue to aggressively work to secure our borders, address underlying causes and deter future increases in unauthorized migration, while ensuring that those with legitimate humanitarian claims are afforded the opportunity to seek protection.”

A DHS official, speaking on condition of anonymity because the official was not an authorized spokesman, added that the government “is definitely concerned, but it’s really, really hard to predict what’s going to happen.”

“We don’t want a repeat of 2014,” the official added. “Nobody likes to see young children and others sitting in Border Patrol stations because we have nowhere to release them to. Nobody wants to see that situation again.”

Before the last surge, the administration did too little to heed warning signs that extended back several years, according to interviews with former government officials, outside experts and immigrant advocates. The result was an inadequate response that contributed to a rapidly escalating crisis in the summer of 2014.

But a series of steps by DHS and other federal agencies – including opening new processing centers across the Southwest, reassigning hundreds of Border Patrol agents to the Rio Grande Valley in Texas and amping up a public awareness campaign in Central America about the dangers of border crossing – helped dramatically reduce the numbers through the second half of last year and the first few months of this year.

A key factor in the decline was Mexico’s decision to launch a new policy called the Southern Border Program, intended to shore up that country’s porous frontiers with Guatemala and Belize by deploying more police officers and increasing operations and checkpoints. Since then, the number of Central American migrants captured in Mexico and deported has increased substantially.

The United States has also provided equipment such as scanners and vehicles to Mexican migration officials working on the southern border. U.S. officials have said they plan to spend about $150 million on two major programs, including a biometric system for Mexico to keep track of the migrants it detains and a series of cellphone towers along the rural border to help government agencies communicate.

But the violence that was a key factor in driving people to leave has surged again. El Salvador’s homicide rate, for example, is now at its highest since the country’s civil war ended in 1992, after a truce between two prominent gangs broke down last year. A drought across the region has also helped spur departures, but experts point to violence as the primary cause.

“These children are especially vulnerable. They are not fleeing because they can’t find a good-paying job. They are fleeing because of violence,” said Carmen Chávez, executive director of the Casa Cornelia Law Center in San Diego, which has provided legal services to more than 800 unaccompanied minors this year. “It’s a humanitarian crisis that has been building. It blew up last year, and the situation hasn’t changed.”

The children still fleeing have been aided by smugglers forced by the heightened enforcement in Mexico to find new routes into the United States. During last year’s migrant surge, the vast majority of children crossed the U.S. border through the Rio Grande Valley region near the southern tip of Texas.

But the latest U.S. Customs and Border Protection data shows rapid increases of children and families crossing farther west, such as in the El Paso, Texas, and Yuma, Arizona, areas. Immigration experts say migrants are increasingly traveling in small boats from Central America north along the Pacific and Gulf coasts of Mexico to evade immigration authorities, while also hiding more in tractor-trailers and in secret compartments of vehicles to avoid detection.

Wendy Young, president of Kids in Need of Defense, a Washington, D.C., nonprofit that represents unaccompanied minors in deportation proceedings, said smuggling “is a big business, it’s an illicit business, and it’s connected to the same narco-traffickers driving people out of their countries. We do understand that smugglers have adjusted their routes across Mexico.”