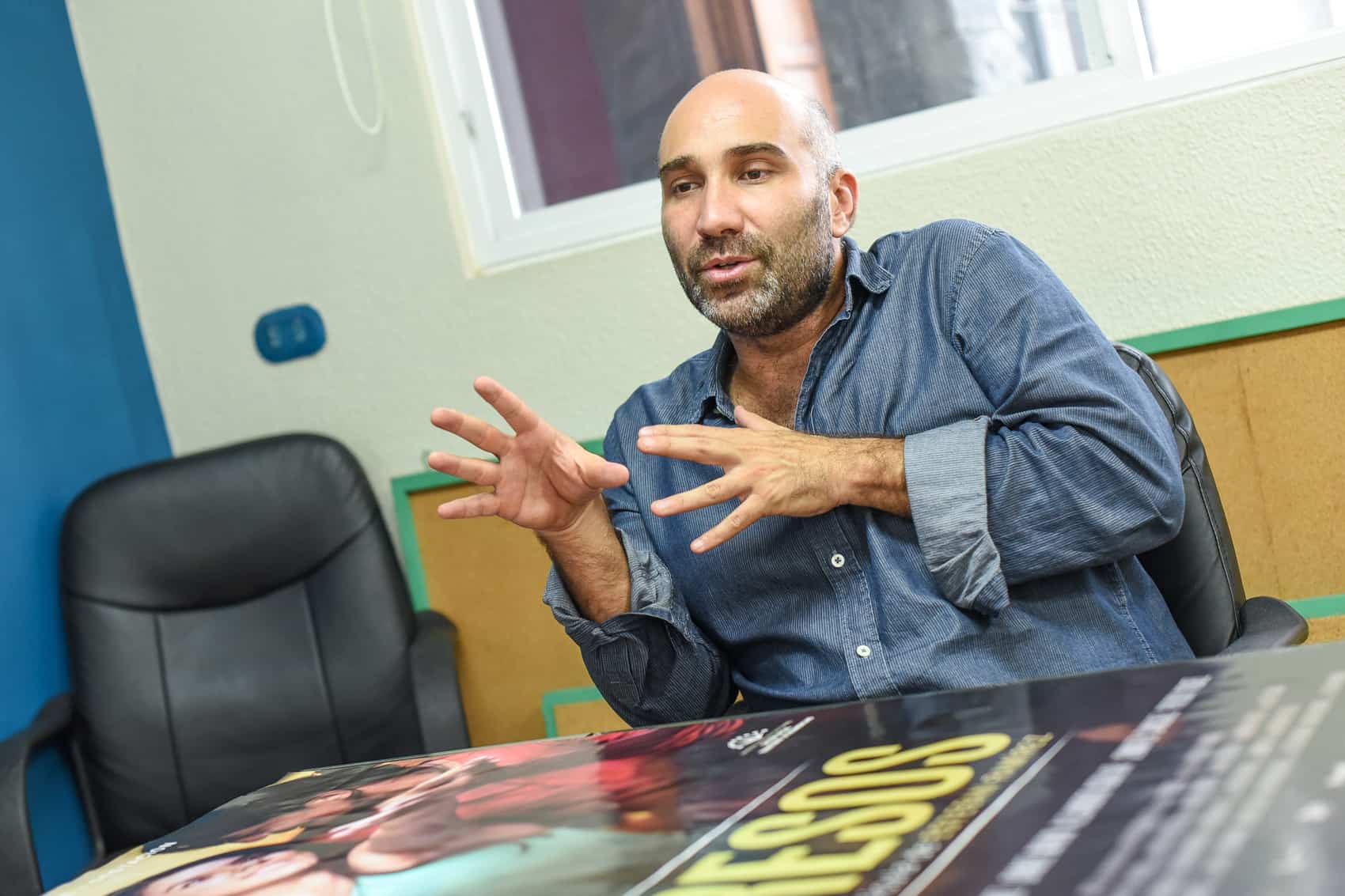 Esteban Ramírez is a second-generation Costa Rican director: the son of filmmaker Victor Ramírez, he worked for many years in audiovisual advertising in television, but then gained international recognition with two critically acclaimed films he cowrote, produced and directed: “Caribe” in 2004 and “Gestación” in 2009. At the moment, Ramírez is totally devoted to his latest production “Presos“ (“Inmates”), though he is also pondering what lies ahead.

The Tico Times sat down with Ramírez at his office to talk about his influences and the challenges of his latest movie. Excerpts follow.

Did your father’s career lead you toward becoming a filmmaker yourself?

It wasn’t easy. Both of my parents had non-traditional professions: my mom was a dancer, so I grow up on a house that was also a dance academy, and it was an unusual situation starting with that. With my dad, I didn’t really see him producing, but he did some interesting documentaries such as “La energía y nosotros,” “Tengo Cuerpo” and “Los Presos.” This one in particular [“Los Presos”], was the work that had a greater impact on me, a pretty emotional effect. There’s when I started to think about getting into the audiovisual world. At the beginning it wasn’t clear that I wanted to do movies, because between 1986 – 2001, no [Costa Rican] movies premiered.

I wouldn’t say [my eventual entry into film] was under the influence of my dad, because by that time he didn’t make movies any more. I did see my mom dancing all the time, but I didn’t want to become a dancer, even though I dance pretty well [laughs].

Film is not a strong field in Costa Rica. What is the life of a filmmaker like here?

Exciting! But rough. I’d also say gratifying, because a lot of people have appreciated the work we have done. And when someone appreciates your work is because that person has seen the effort. It’s true that is not the best market here in Costa Rica, but it’s still gratifying.

The key to success is to be honest with your work. There is a huge difference between the people who want to be filmmakers and the ones who actually make films. There are people who only like the glamour, and only [want to be able to] say that they are making a movie; they make mediocre films. This field requires a lot of work, strong commitment,  seriousness. You don’t make films only to say that you are a director. You do it because there is a need to tell something. You want to entertain people, but not only that! At least in my case, it is important to transmit a message, to make people think about something, make them feel something, make them reflect about something. That’s really important. To make a film that will leave people thinking about it, not a film that they will see on Sunday night and then forget.

Your movies have had really good acceptance by the public, but what would you say has been your most significant project?

All of them! Many people have said “Presos” is the best one so far, but I have the same affection towards all my works. I can’t choose one of them. What I can say is that the common dominator of all my works is that I have put all my effort into them. I’m glad there haven’t been one project that I have abandoned or neglected at the end. I have finished them all, doing all I can do.

The difference between “Presos” and the other two movies is that when the others premiered, there was more uncertainty because it was at the start of the year, so there were more competition in the movie theaters, and they became less compared with the other films [international films]. Also, with the other movies, I ended up really tired, but with “Presos,” it left me wanting to make another film really soon.

The challenge of filming in a prision – what was that like? What was the motivation to make this film?

Well, before we start talking about the movie I have to say that the important thing is that there were no animals wounded during the film [laughs].

There was always the tension that we wouldn’t be allowed to film, because at the moment [authorities or inmates] say, “We don’t want to be part of this,” we would have had to stop. There were some of the inmates who didn’t want to be filmed, so we just didn’t film those inmates. Fortunately, they never put a stop on the filming. I’d say it was easy and difficult at the same time. Easy because they really wanted to be there and to help, and if they didn’t want to participate they just didn’t. There was a lot of respect. Difficult because it was an uncontrollable place, and “Hollywood” always tries to have everything under control, and there, we couldn’t control that location. We couldn’t just say, “Silence.” It is not possible! If you are on a film set with paid actors, you ask for silence and they will be quiet because you are paying them. Here’s, it was different. The interaction between the actors and the inmates was super cool; we had a great relationship. It is true that they had done bad things, but they are not doing bad things the whole time. Most of them regret what they have done.

The movie covers many topics: drugs, prejudice against Colombians, the prision, family. My idea was to break up the prejudices people have towards these topics, and try to understand these people better. When someone sees a person in prision, they start to criticize the person. Of course you wouldn’t say that what he or she did is correct, but we don’t know what made them do what they did, and we have to keep in mind that circumstances change, and one day something can lead you to do something “bad,” which is what happens to Victoria [the film’s protagonist, played by Natalia Arias]. It is so easy for people to criticize without knowing the whole story, and that’s basically the main motivation: less hate and more understanding.

When I saw the inmate interviews in the documentary my dad made [“Los Presos”], it was, to me, a more human and gentle approach to these people, less sensationalist and tabloid. I wanted to give a more human approach to people, but through fiction.

What do you think is the effect the movie is having on people, both the general public and inmates?

I think even though people don’t want to accept it, there is a feeling of some kind of identification, not only with characters out of the prision but also with the ones inside. I think we all have done something incorrect, so it also works as a mirror: one of them could perfectly well be one of us. It is a really carefully made film. The characters are well-constructed and very Costa Rican, so there the public really identifies with them. It has generated real feelings and has created consciousness in people.

As for the effect on the inmates, I think it is exciting to feel that we are giving them a voice. It is good that they feel reflected in the movie, because this is not a situation they usually experience.