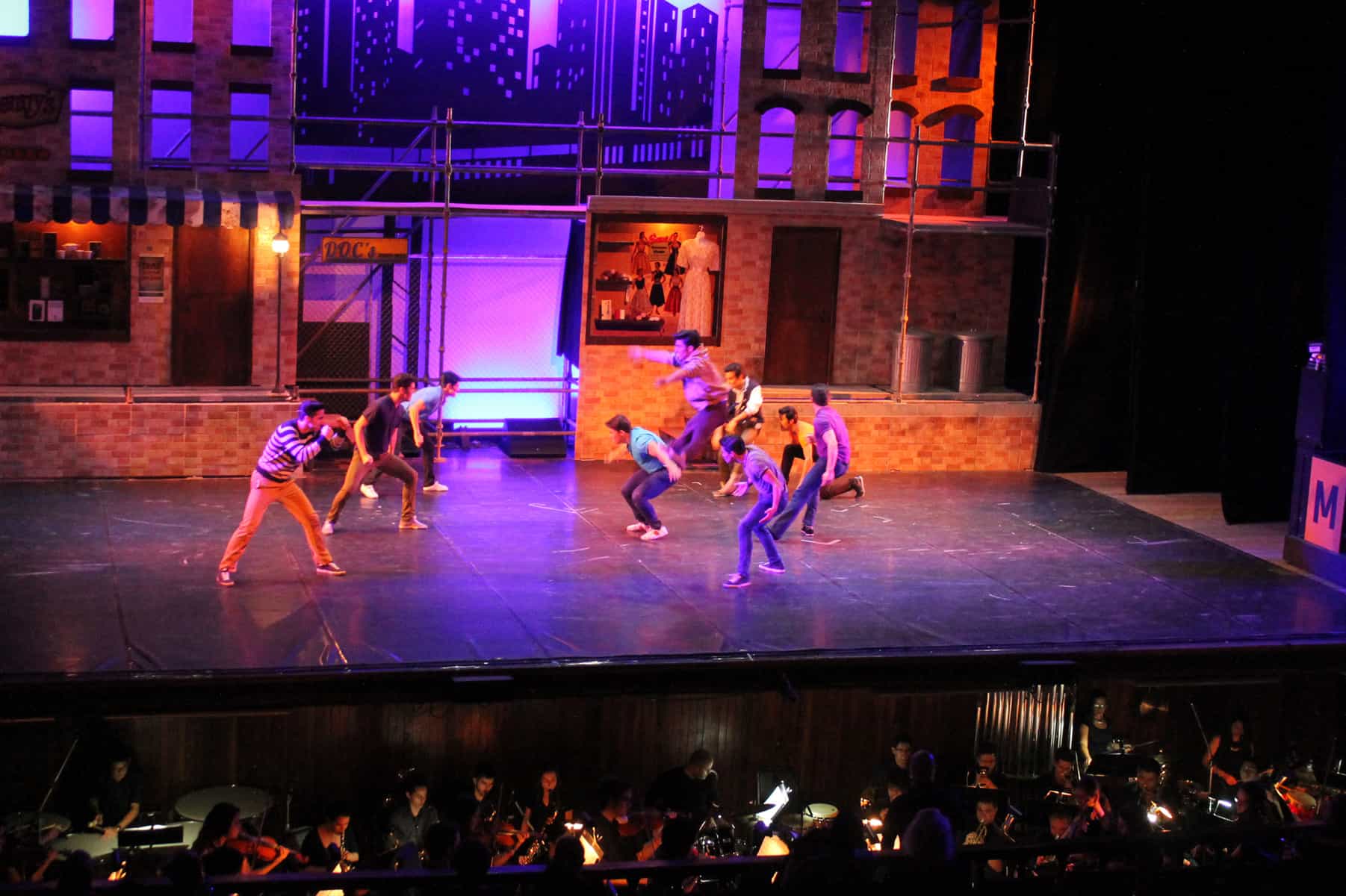 When you're a Jet you're a Jet: The cast of "West Side Story" mixes battle with ballet, May 2015. (Courtesy of Luciérnaga Producciones)

“West Side Story,” the first offering from new theater company Luciérnaga Producciones, is in full swing – or full mambo, as it were – at the Melico Salazar Theater in downtown San José.

The production has some weak spots: the orchestra isn’t quite up to the challenge of Leonard Bernstein’s epic score, and while the lead vocals are strong, some of the smaller roles fall far short in terms of singing ability (fortunately, the boisterous, scrappy nature of the gangs’ musical numbers help camouflage this).

However, Broadway’s first major foray into Costa Rica is well worth a visit. Here’s why:

The iconic dancehall scene, “America,” and pretty much any moment where the cast members really let loose are well worth the ticket price.

For someone who grew up memorizing the original English version with Stephen Sondheim’s brilliant lyrics, it’s definitely strange to see “West Side Story” in Spanish. Songs such as “One Hand” just can’t be translated without altering the clean rhythms of the original. However, the translation does work quite well overall.

What’s more, there’s something very right about telling this particular story in Spanish. A musical largely about Puerto Rican immigrants to New York, whose 1961 film version is infamous as an example of Hollywood racism – María was played by notably non-Latina actress Natalie Wood – is meant to be translated, in many ways. An added perk? No “West Side Story” nerds singing along in the audience (ahem).

The production does a fantastic job channeling the fashion and feel of an earlier time, but it’s impossible to see “West Side Story” today without thinking about how much hasn’t changed. The shoddy treatment of immigrants and the tension between young people and police officers are two aspects of the plot that are ripped right from today’s U.S. headlines. “Gee, Officer Krupke,” the song in which the Jets lampoon the justice system, is a comic piece, but a sad one, too.

Fortunately, if you get too glum, someone will start snapping and doing backflips. And did I mention the dancing and the dresses? Check it out. (Just don’t sit at the front edges of the upper levels. While anyone buying a balcony seat expects to crane a little, entire sections of the action are totally invisible from those seats, which really should have been blocked off or sold at a steep discount. It’s sort of cool to find yourself mere feet above Tony and María’s balcony scene – but we would rather have seen their faces.)