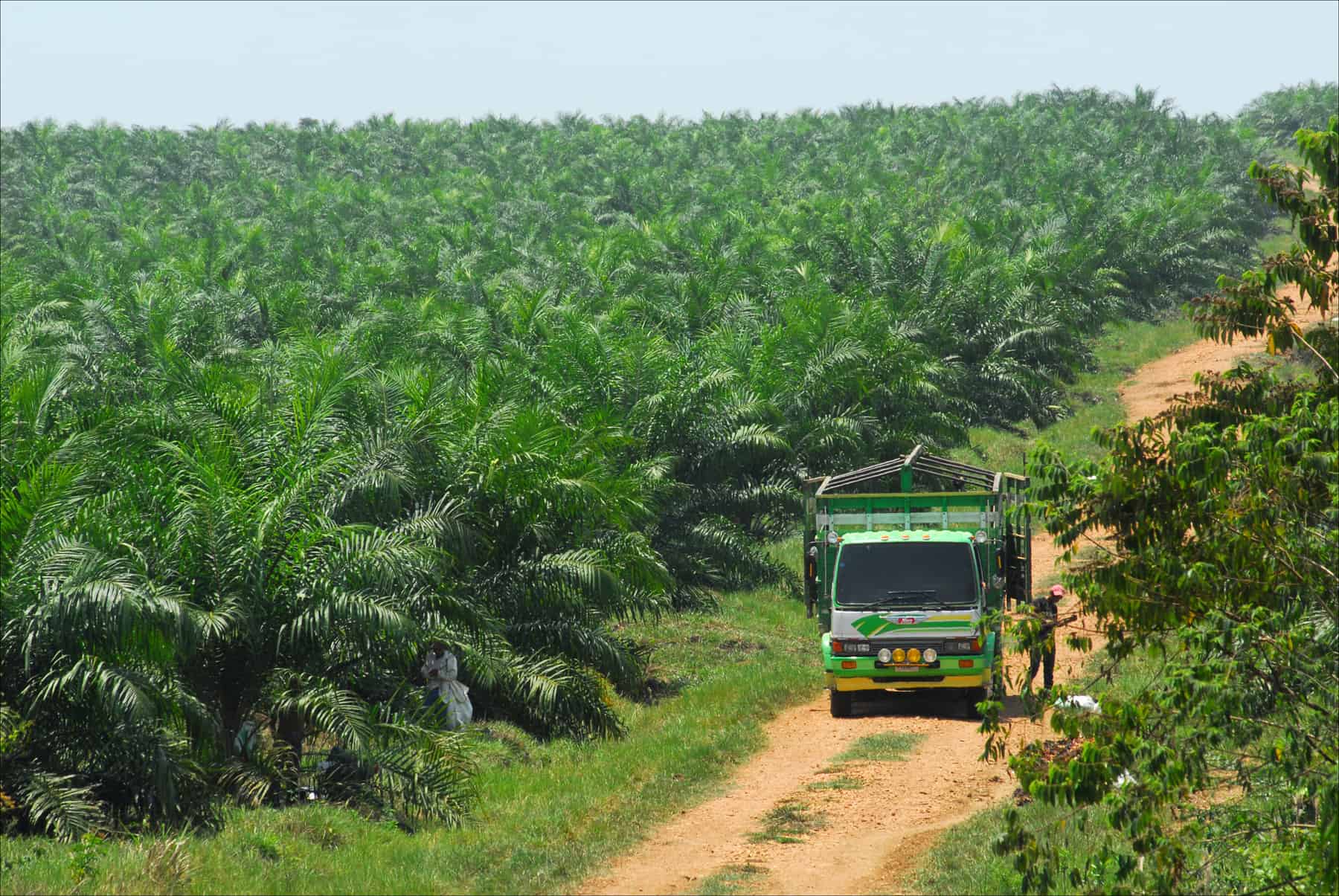 A worker loads a truck in the middle of a huge palm oil plantation in Petén, northern Guatemala. (Larry Luxner/The Tico Times)

Third in a four-part series on Guatemalan agribusiness based on a recent visit by correspondent Larry Luxner. The first two stories covered sugar and bananas.

FINCA VICTORIA, Guatemala – The sun had been up for more than two hours at Finca Victoria, but the morning was still so quiet we could hear howler monkeys screaming way out on the horizon. I’d just arrived on a charter flight from Guatemala City, touching down at the nearby Rubelsanto airstrip and bouncing over dusty dirt roads by four-wheel-drive the rest of the way.

It seemed like the end of the world, yet this lonely outpost – located just 35 kilometers from the Mexican border in the department of Alta Verapaz – is at the epicenter of what is quickly becoming Guatemala’s newest, and most controversial, agricultural commodity: African palm oil. 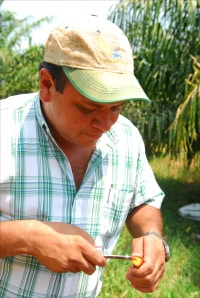 Here, stretching off into the distance, are rows upon monotonous rows of African palms. They all belong to Palmas del Ixcán, one of the country’s largest exporters of edible palm oil. The company’s nursery, or vivero, contains 107,000 baby trees, all of them cultivated from seeds purchased from Colombia, Costa Rica and Honduras.

If there’s one thing Guatemala has in abundance, it’s land – and vast tracts of scrubland and otherwise unproductive space in the departments of Alta Verapaz and Petén are now planted with African palms that can grow up to 20 meters high.

“In Guatemala, there’s a lot of land that isn’t being used. Planting palms generates income and jobs,” said Alfonso Portugués, agricultural manager at Palmas del Ixcán, which employs 1,500 people in the peak season between June and September, and around 600 at other times.

He says it costs half as much to produce palm oil in Guatemala as in his native Costa Rica. Palm oil, in fact, now represents one-third of the vegetable oil consumed worldwide, and its use is increasing thanks to its high productivity, which uses much less surface area than similar crops.

Portugués, who has a degree in agronomy from the University of Costa Rica and who worked in his country’s banana industry for 20 years – mostly for Dole and Del Monte – says Guatemala has a potential 650,000 hectares to use for palm oil, up from the current 120,000. By comparison, Costa Rica has 40,000 hectares of African palms under cultivation.

He says workers here earn 85 to 95 quetzales per day (equivalent to about $1.25 an hour) for backbreaking work that requires standing long hours in the sun – often without protection – lifting heavy bunches of palm-oil berries, known as racimos, and being exposed to thorny leaves and undergrowth.

Each racimo contains an average of 2,300 individual berries and weighs up to six kilograms. A worker on average can cut 120 stems per day, though particularly skilled employees can cut up to 200. A truck can hold about 3,500 racimos, and it normally takes six to eight able-bodied men about two hours to fill these trucks, which carry their loads from the farm directly to a recently completed $16 million extraction plant capable of processing 40 tons of fruit per hour. 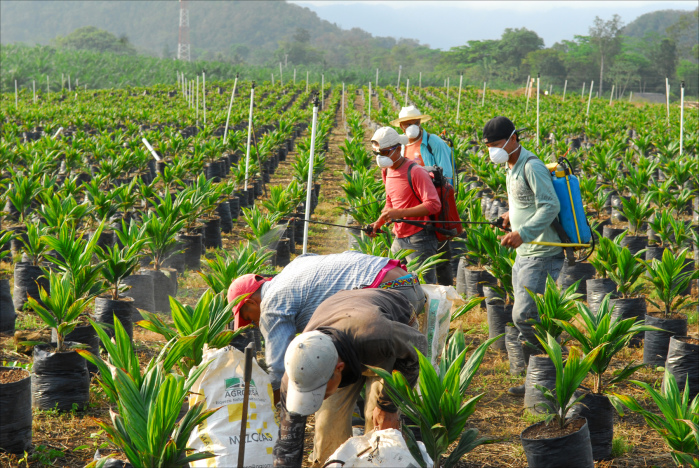 Farmworkers spray pesticides on baby African palm trees at the Finca Victoria nursery, about 35 kilometers from the Mexican border in the department of Alta Verapaz, Guatemala, May 10, 2014. Larry Luxner/The Tico Times

Alexander Ramírez, production manager at Palmas del Ixcán, explained the whole process. Fruit is hoisted from the trucks by big orange cranes, which drop their loads into a holding area. From there, they slide down an embankment into huge steel baskets, each one holding up to six tons of berries. They then pass through a sterilization tank, where the berries are heated to 140 degrees Celsius for an hour, and next into a de-pulping machine.

The sophisticated factory, which employs 18 people, generates energy by burning plant fibers, thereby avoiding the use of bunker fuel or diesel. It produces about eight tons of edible palm oil per hour.

Despite the hard work involved, Luís Velázquez Quiroa says the local campesinos are grateful to be employed at all.

“If the palm oil companies weren’t here, these people wouldn’t have any work,” claimed Velázquez, Guatemala’s former minister of economy and now a paid consultant for the palm oil industry. “Most of the adults have not gone to school, and the type of soil here is not suitable for growing other crops.”

Not everyone buys that argument.

Oxfam America came out swinging against Palmas del Ixcán in a damning 2011 study titled “The Power of Oil Palm: Land-Grabbing and Impacts Associated with the Expansion of Oil Palm Crops in Guatemala.”

In the 64-page report, Oxfam says Guatemala now ranks ninth among palm oil-exporting countries worldwide, and second in Latin America, only behind Ecuador. It claims that the cultivated area dedicated to oil palm in Guatemala has quadrupled in a decade, while production of staple food crops has declined in the same period, from 155 kilograms per capita in 1993 to 125 kilograms in 2007.

“Just five Guatemalan companies control the entire production chain, from farming to commercialization. They operate like a cartel, as they avoid competition and dominate production, sales and prices,” says the report. “Together, the palm oil businesses occupy an area in plantations equivalent to the land used by more than 60,000 subsistence farmers.”

The report also disputes the industry’s wage claims, adding that palm oil harvesting is dangerous work, with risk of exposure to injuries, insect bites and pesticides – and often no medical assistance for miles around.

“Payment depends on productivity, and minimum goals demand a strenuous effort. Most of the men do not earn more than 60 quetzales (about $7.50) per workday, and the women earn less than 40 quetzales (about $5.00),” it says. “The day begins at 6 a.m., and ends at 3 p.m. The women who don’t work in the plantations need to get up before 4 a.m. to prepare lunch for their partners.” 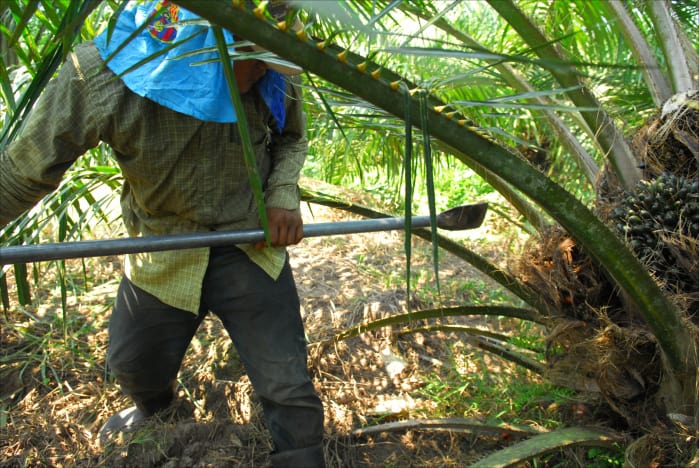 Guatemalan worker harvests the fruits of the African palm at the Palmas del Ixcán operation in the department of Petén. Larry Luxner/The Tico Times

Similar charges have been leveled at other Guatemalan industries in the past, including sugar, coffee and bananas – with industry leaders almost universally blaming leftist labor unions and politicians for stirring up trouble.

“These campesinos are not making semiconductors, so people of this intellectual level are easier to influence,” said Felipe Molina, the owner of Grupo Olmeca, Guatemala’s largest palm oil producer. “Organizations are investing money and paying labor leaders to get into these communities and trying to convince these people of things that are not true.”

Molina’s conglomerate, operating under the names Hame, Repsa and Santa Rosa, controls 46,000 hectares cultivated with African palms and employs 22,000 people, more than half of whom work at palm oil plantations in Escuintla, Sayaxché (Petén), Ocós (San Marcos) and Coatepeque (Quetzaltenango). The remainder works in the banana industry.

“My father established this company in the 1950s, beginning as a cotton grower,” Molina told The Tico Times during an interview at his Guatemala City office. “He eventually branched into vegetable oil, and later got into the refining business. In the 1980s, world prices for the fiber came down, so he began investigating many different crops: soybeans, sunflowers, corn, peanuts, anything you could extract oils from. But those are not tropicals, so in the end he decided to go for palm oil, knowing Guatemala has a big agricultural potential. That was in 1988. When he started, there were some small-scale plantations, but they were not properly developed, so they weren’t successful.” 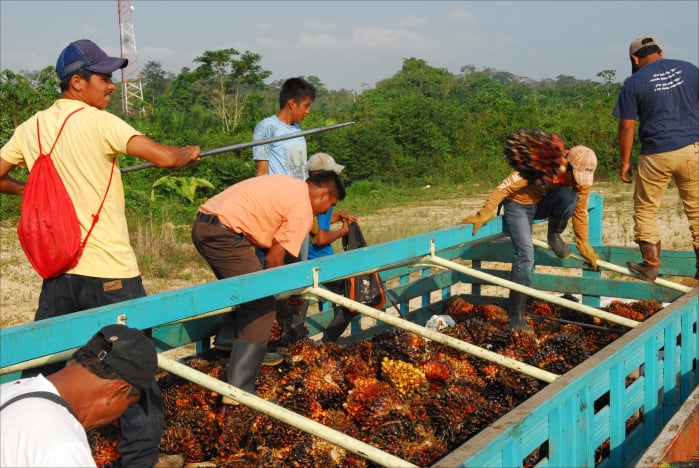 Workers load a truck at the Palmas del Ixcán operation in the department of Petén, Guatemala. Larry Luxner/The Tico Times

Molina said his family planted African palm on land along the Pacific coast that had previously been used for cotton. But with the drop in cotton prices, that crop became unprofitable, so farmers had to turn to something else.

While Molina declined to say how much his conglomerate has invested in palm oil or how much it earns, he did estimate that Guatemala’s production costs come to between $550 and $600 per metric ton – less than Colombia’s $700 per ton but more than Asian competitors such as Malaysia ($520), Indonesia ($480) and Thailand ($510).

African palms can live for up to 50 years, though productivity generally declines after 25 years. For this reason, it’s a long-term investment.

“Sustainability may be a new concept but not for palm oil growers,” Molina said. “When you decide to get into this business, it’s not an annual crop. You know you’re going to be on that land for 30 years.” 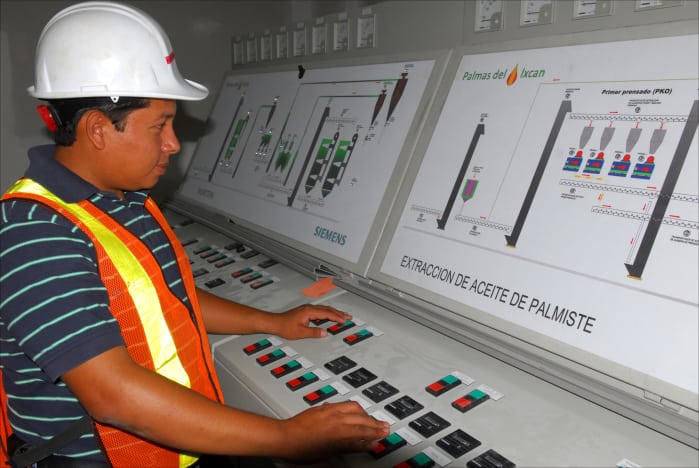 Yet a member of a local association of indigenous people in the municipality of Chisec told Oxfam in August 2012 that “for us, oil palm does not generate employment, it generates poverty.”

In response, Molina claims that Oxfam and the Ford Foundation finance studies against palm oil cultivation with the aim of driving his industry out of business.

“Our big mistake is that we’ve been very quiet,” the executive said. “Go and ask the people who actually live in these communities if they’re better off than they were 10 or 15 years ago. They will all tell you they appreciate their jobs compared to when there was nothing.”

Added Velázquez: “These groups lie all the time. For example, they say we’re producing biodiesel. That’s not true. Not a single crop of palm oil is used for biodiesel in Guatemala.”

Jacobo Regalado, head of the Honduran Ministry of Agriculture and Livestock, told the daily La Prensa that processing capacity has also increased by 33 percent, generating $50 million in additional annual export earnings. Those earnings came to $304 million in 2012, when 11 processing plants were operating.

“Palm cultivation in the department of Cortés is growing, and in less than five years, this sector will require at least five processing plants,” said José Canales, plant manager at Sula Industrial Corp. (Coinsu). Added producer Rogelio Padilla: “It’s the only way we have to recover the huge financial losses we had from sowing beans and corn. Maintenance is easier and profits increase every year.”

This year, Honduras is likely to export $400 million in palm oil, said Héctor Castro, president of the Association of Palm Growers. He told El Mundo newspaper that one of the most attractive markets for Honduran palm oil is Venezuela, which could receive the oil as part of payment for fuel provided under the Petrocaribe initiative. Plans are underway to open new export markets for palm oil, including China and India. 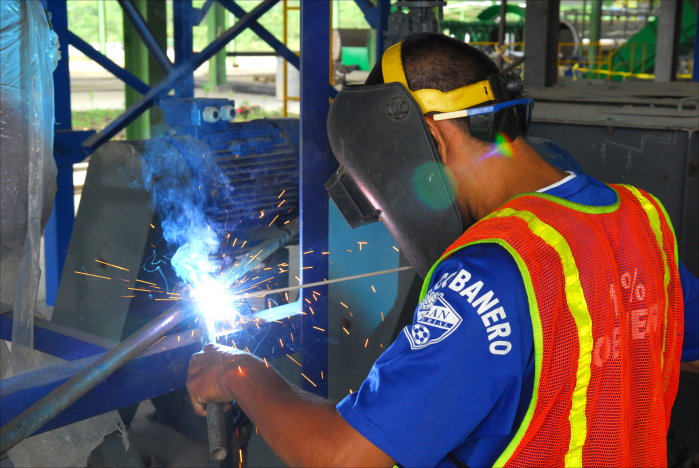 For now, however, Malaysia and Indonesia produce 86 percent of the world’s palm oil, with Colombia a distant third and Guatemala still way behind.

“We in the agricultural industry are focused on what we can do well, and how we can exploit this potential if only the politicians would allow us to work,” said Molina. “But we have to be mature and understand that things are not going to change from one day to the next.”

Follow The Tico Times for the upcoming fourth story in the series on Guatemala’s coffee industry.