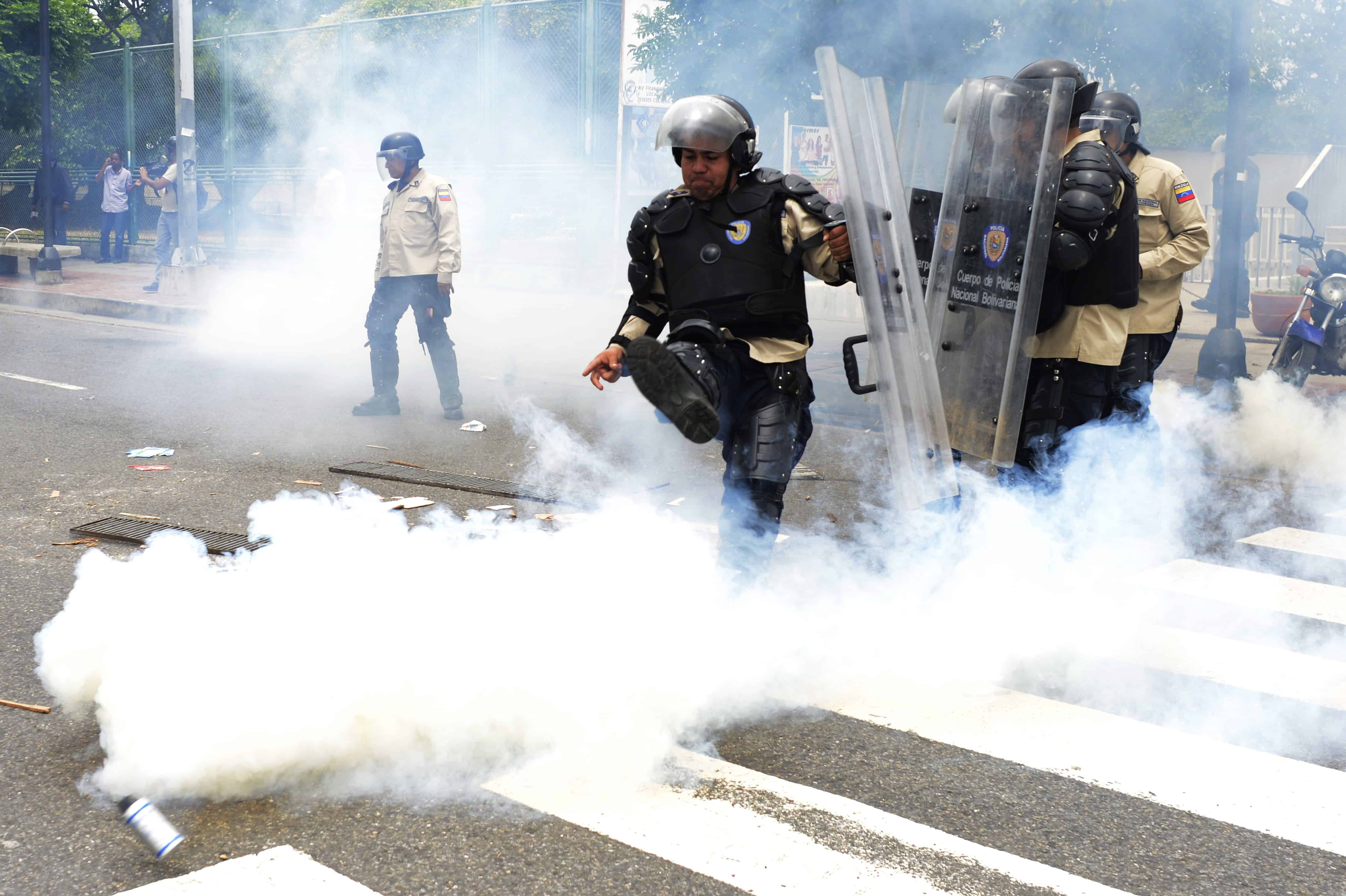 A Venezuelan riot policeman kicks a gas canister during clashes with opposition students in Caracas on May 8, 2014. (Geraldo Caso/AFP)

CARACAS, Venezuela – Venezuelan authorities demolished four protest camps in Caracas and detained more than 200 people in pre-dawn raids Thursday, striking at the remaining bastions of a months-long and at times deadly anti-government movement.

But hours later, groups of youths were back out on the streets of the capital, where they were met by tear gas and rubber bullets.

Riot police had earlier swept through the camps in the surprise raids, with Interior Minister Miguel Rodríguez Torres saying the sites occupied by students were “being used by more violent groups to commit terrorist acts.”

He said the 243 people detained would be questioned to determine whether they should be prosecuted.

At least 41 people have died and more than 700 have been injured since students and other opponents of the socialist government took to the country’s streets in February to protest rampant crime, runaway inflation and shortages of basic goods.

Over the past month, the protest movement has largely been concentrated in Occupy-style encampments in Caracas, with the main one set up opposite the office of the United Nations Development Program in a tony neighborhood.

That site — which consisted of hundreds of tents and blocked three of six lanes of a major thoroughfare — was ravaged by the raid.

Rodríguez Torres said police seized drugs, weapons, explosives, mortars, grenades and gas canisters during their operation — “everything you would use to confront the security forces on a daily basis.”

But student leader Juan Requesens vowed the demonstrators would not be deterred.

“The students will pursue their fight for rights,” he said.

Spanish actor Antonio Banderas expressed solidarity with the protesters but urged them to use the ballot box for change.

“I would tell Venezuelans who are fighting for their freedoms … that the magical moment will come once a vote occurs,” “The Mask of Zorro” star told reporters in Lima. A professor walks near tents in front the heaquaters of the United Nations Development Programme (UNDP), during a protest asking for UN's observers, in Caracas on March 26, 2014. Juan Barreto/AFP

López “has again been transferred to the Ramo Verde military prison,” a statement from his Popular Will party said.

The announcement did not specify a new court date.

“What are they afraid of? Of the truth? They know I should be freed,” the party, via Twitter, quoted López as saying.

The Harvard-educated economist has been in custody at a military jail since February 18 for allegedly inciting deadly violence during the protests. He was arrested in the midst of a massive opposition rally.

The arrests of López and other opposition leaders have stoked the demonstrations, and their release was one of the conditions set by the opposition in talks aimed at ending the crisis.

In Washington, Assistant Secretary of State Roberta Jacobson said the Venezuelan government’s actions “do not support the efforts at the dialogue table.”

Jacobson also told a Senate hearing the U.S. was still considering sanctions against those responsible for human rights violations and “will use those when we think the time is right.”

The opposition-government talks have suffered stops and starts since they began, with some sessions postponed at the last minute.

A round of negotiations planned for this week has been postponed until next week. An opposition student writes an anti-government slogan on a shop window in Caracas, Venezuela, on May 8, 2014. Juan Barreto/AFP

President Nicolás Maduro, narrowly elected last year to succeed late longtime leader Hugo Chávez, has described the protests as a coup attempt in the oil-rich OPEC nation that has seen inflation of near 60 percent.

People often stand in line for hours outside supermarkets and consider themselves lucky if they leave with basics such as sugar, milk or toilet paper.

Most economic experts blame the South American country’s problems on a decade of rigid currency and price controls, as well rising debt, dependence on imports and stagnant economic growth.

“You can crush your opponent, but you are not solving the problems.”