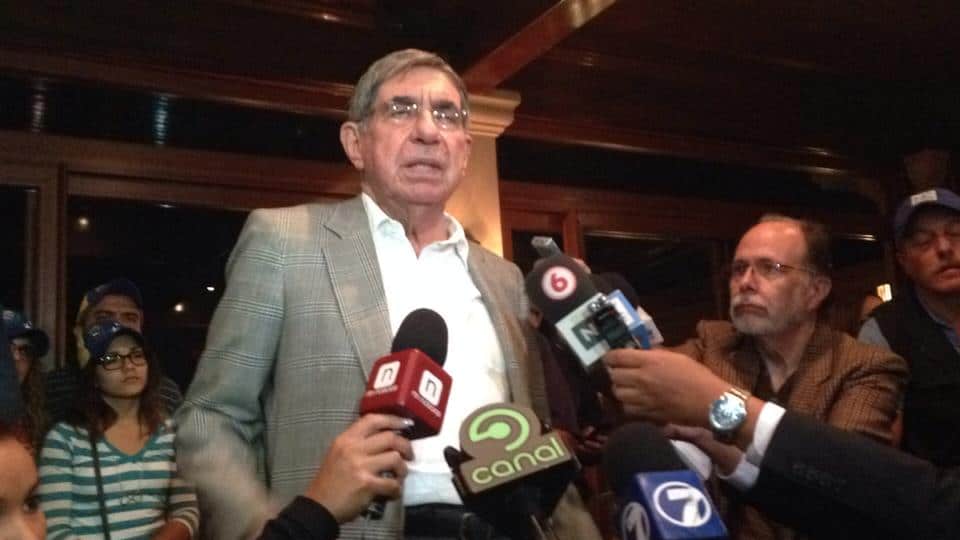 Ex-Costa Rican President Óscar Arias meets with reporters outside his home in San José. (via Facebook)

Former Costa Rican President Óscar Arias accepted an invitation from Venezuelan opposition leader Leopoldo López to observe the conflict in Venezuela. It seems unlikely, however, that the two will meet soon, as López recently turned himself in to Venezuelan authorities.

Arias, the 1987 Nobel Peace Prize winner, has been one of the most vocal critics in the region of Venezuelan’s violent crackdown on anti-government protesters. Arias has said there has been a “negligent silence” from Latin America’s governments on what’s occurring in Venezuela.

Three protesters have been killed so far. Last week, Venezuelan President Nicolás Maduro announced plans to arrest López on charges of homicide and inciting violence. Leftist governments in the region have backed Venezuela’s head of state. Supporters for Maduro also have taken part in the daily demonstrations.

Costa Rican officials also have repeatedly spoken out against the violence. President Laura Chinchilla said Tuesday, “We hope they can reach a peaceful solution because the Venezuelan people are suffering.”