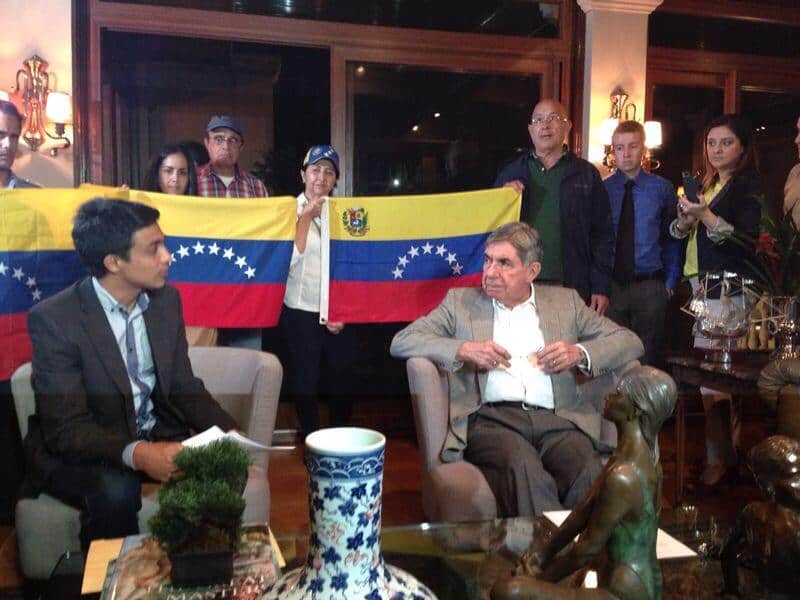 Most of Costa Rica’s highest ranking officials have come down hard on Venezuela’s deadly response to anti-government protests on Friday. But ex-President Oscar Arias began raising his voice last night. At his home Thursday evening, the 1987 Nobel Peace Prize winner gave one of the most thorough condemnations of Nicolás Maduro’s government.

Arias met with Venezuelan expats at his San José home Thursday. He then posted a diatribe on Facebook called “There is nothing worse than to be afraid to tell the truth” (“No hay nada peor que tener miedo a decir la verdad”), where he blasted the actions of Venezuelan security forces and told Maduro he had no right to call his government a democracy. He also confronted the Venezuelan government’s unrelenting belief that anyone who criticizes the nation is a (U.S.-backed) imperialist.

That last point is essential. The leftist ruling governments in Cuba, Bolivia, Argentina, Ecuador, Uruguay and Nicaragua have all backed the Venezuelan government. Some of those officials characterized the protests as a coup attempt, like Maduro claims.

As a way to counter U.S. influence, Latin America has grown increasingly united through organizations like the Community of Latin American and Caribbean States (founded in Venezuela in 2011). But Maduro – like Hugo Chávez before him, and other leftist leaders in the region – acts as if he’s immune to criticism, and all condemnations must come from benefactors of the U.S.’ apparently omnipresent imperialism.

The U.S. and the European Union have both voiced concerns about the current unrest in Venezuela.

Arias, who won the Nobel for brokering peace agreements in the midst of Central America’s brutal civil wars, has been chided in recent years for focusing more on his own legacy than working to better the region.  However, he currently represents the most prominent voice in the region calling out the Venezuelan government for actions that, going by the reports coming out of Caracas, seem unjustifiable. Will any other Latin American leaders join him?

We translated Arias’ full commentary below:

I want to add my voice to a chorus of concern that crosses through a good part of our America. Thousands of students and opponents of the government of President Nicolás Maduro in Venezuela were brutally attacked with firearms by the security forces. Three people died and at least 26 were injured at the end of a series of protests in Caracas and other Venezuelan cities.

In no truly democratic country does one go to prison or get killed because of thinking differently or wanting to express opposition to government policies. Venezuela can talk all it wants to sell the idea that it is a true democracy, but with every violation of human rights committed, that claim, in fact, is denied in practice – because (the state) is repressing criticism and dissent. Any government that respects human rights must respect the right of its people to demonstrate peacefully. The use of violence is unacceptable. Remember the warning of Gandhi: “An eye for an eye and the whole world is blind.”

I have always fought for democracy and I am convinced that in a democracy, if one does not have opposition it ought to foster it, not repress it and condemn it to a hell of persecution, which is what  President Maduro’s government seems to be doing. Venezuela must respect human rights, especially the rights of opponents, because there is no merit in only respecting the rights of your supporters.

At some point in his life Martin Luther King, Jr. said: “… the hottest place in Hell is reserved for those who remain neutral in times of great moral conflict. There becomes a time when silence becomes betrayal.” I am aware that in making these statements I’m exposed to all sorts of criticism of the Venezuelan government. They will accuse me of intruding in internal affairs, of disrespecting their sovereignty, and almost with certainty, of being a lackey of imperialism. Without a doubt I am a lackey of imperialism: of the empire of reason, of sanity, of compassion and freedom. I will not be silent when human rights are violated. I will not be silent when the very existence of a government like that of Venezuela is an affront to democracy. I will not be silent when the government threatens the life of human beings, for defending their rights. I have lived long enough to know that there is nothing worse than to fear telling the truth.