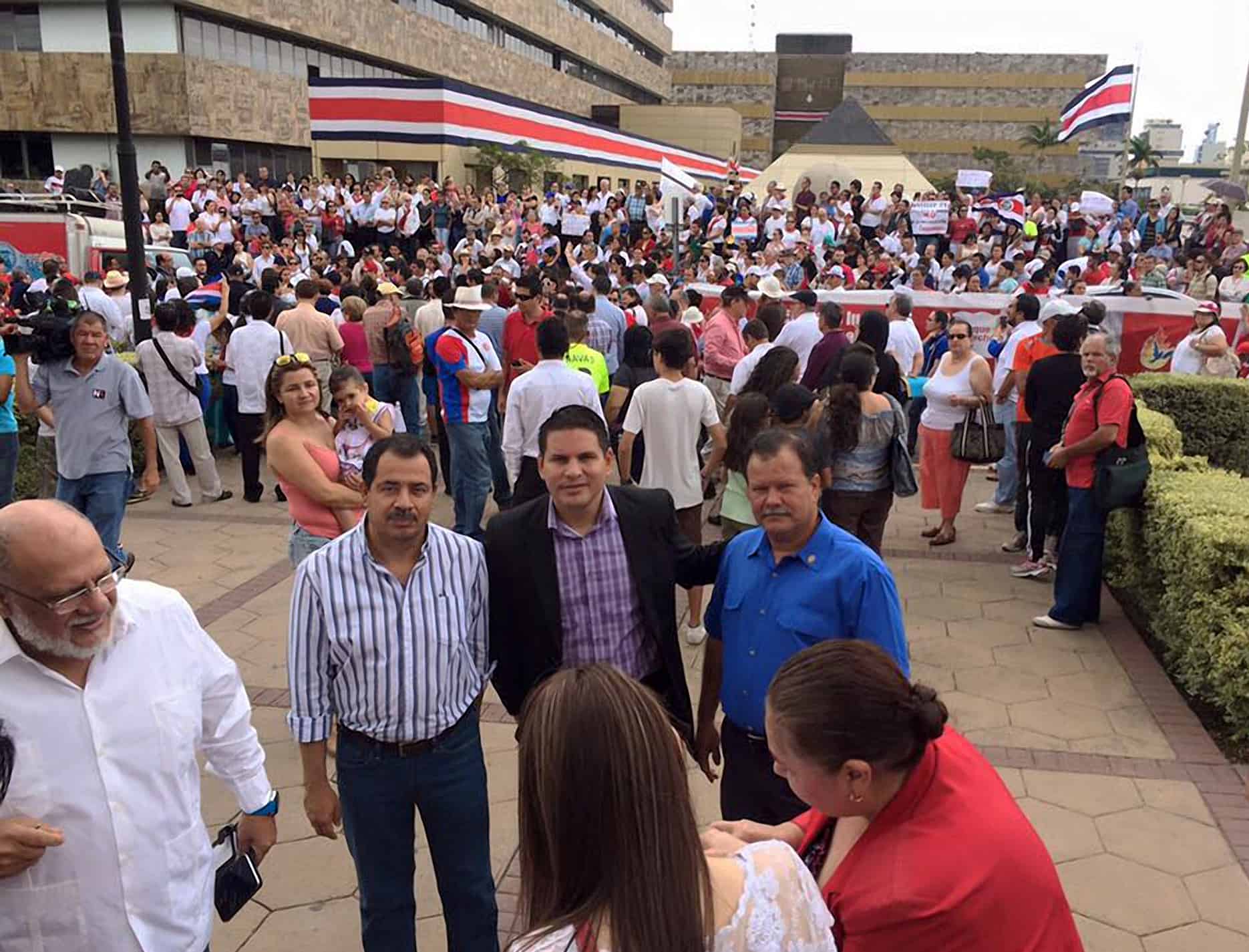 Lawmakers Mario Redondo and Fabricio Alvarado (left and center) hold a public demonstration on Sept. 15 in front of the Supreme Court. They also collected signatures to file a complaint against the executive decree to reinstate IVF procedures in Costa Rica. ((Via Mario Redondo's Facebook))

Costa Rica’s high court threw a wrench in President Luis Guillermo Solís’ attempt to legalize in vitro fertilization and comply with an international court order. On Wednesday, the Constitutional Chamber of the Supreme Court or, Sala IV, admitted a complaint challenging the constitutionality of an executive decree signed by Solís on Sept. 11 that would regulate IVF in Costa Rica.

A majority of Sala IV justices agreed to temporarily suspend the process to reinstate IVF procedures pending their final ruling. Justices do not have a deadline to issue a ruling on the complaint.

Redondo said Wednesday night: “The most important thing here is that we can save lives, because every day that we delay IVF means more embryos are being saved.”

This was the legislators’ second attempt to block the IVF decree. The group had previously filed an appeal, on Sept. 15, alleging that President Solís failed to follow proper procedures when passing the executive decree.

Redondo said at the time that the legislators believed IVF procedures must be regulated by law and not executive decree, that the decree infringes upon the autonomy of the Social Security System, or Caja, and that it violates both the United Nations Convention on the Rights of the Child and the constitutional principle of the inviolability of human life.

Presidency Minister Sergio Salas Alfaro said Wednesday in a news release that the legislators’ latest challenge is part of the country’s normal democratic debate and that the executive branch is respectful of all proceedings before the Constitutional Chamber.

“We strongly believe that this executive decree is constitutional and we will stand by it before the Sala IV in our response to the complaint,” Alfaro said.

President Solís’ decree establishes a six month deadline for the Health Ministry to outline all technical rules and protocols for transferring eggs. It also orders the Caja to restart assisted fertilization procedures within the next two years.

Sala IV’s president Justice Gilbert Armijo voted against admitting the complaint, saying that the Chamber should not issue any decisions on the government’s decree since it is currently under discussion in the Inter-American Court of Human Rights (IACHR). The San José-based human rights court is assessing whether the decree meets the requirements of their Nov. 28, 2012 ruling that called for Costa Rica to legalize in vitro fertilization. Sala IV banned the fertility procedure in 2000.